Home » Americas » The School Culture Wars: ‘You Have Brought Division to Us’

July and August are supposed to be the quietest months of the school year. But not this time.

In Loudoun County, Va., a debate over transgender rights brought raucous crowds to school board meetings this summer, culminating last week with dueling parking lot rallies. The board approved a policy that allows transgender students to join sports teams that match their gender identity and requires teachers to use transgender students’ pronouns.

And, in a particular low point for school board-parental relations, a woman railed against critical race theory during a meeting in the Philadelphia area, yelling, “You have brought division to us.” After the allotted time, the school board president walked off the stage, into the audience, and took the microphone away. She was escorted from the lectern by security.

As summer fades into fall, nearly all of the major issues dividing the country have dropped like an anvil on U.S. schools. 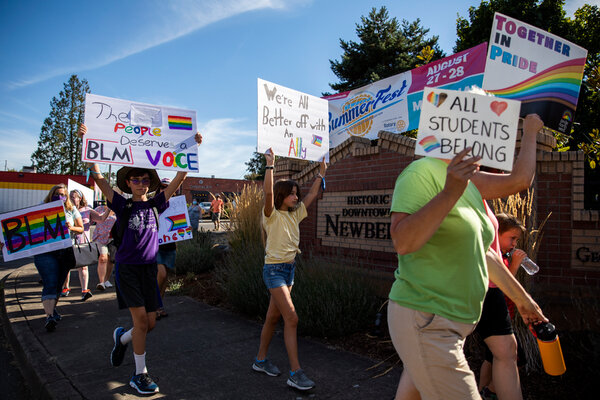 “The water pressure is higher than it has ever been and there are more leaks than I have fingers,” said Kevin Boyles, a school board official in Brainerd, Minn., who said he recently received 80 emails in three days about face masks. He described being followed to his car and called “evil” after a board meeting where he supported a commitment to equity. Another time, a man speaking to the board about race quoted the Bible and said he would “dump hot coals on all your heads.”

“You are just trying to keep everything from collapsing,” Mr. Boyles said.

Schools were already facing a crisis of historic proportions. They are reopening just as a highly contagious Delta variant of the coronavirus is tearing through communities. They need to create a safe environment for teachers and students, while helping children who have been through major trauma.

And then there are the education gaps that must be made up: For many of the country’s 56 million schoolchildren, it has been a year of lost learning and widening inequities.

But at this critical moment, many school officials find themselves engulfed in highly partisan battles, which often have distracted from the most urgent issues. The tense environment comes amid a growing movement to recall school board officials, over everything from teachings on race to school closures. Nationwide, there have been at least 58 recall efforts targeting more than 140 officials this year, more than the previous two years combined, according to Ballotpedia.

As a superintendent in Albany, Ore., Melissa Goff first noticed pushback when her district closed classrooms during the pandemic; a slate of candidates ran for school board largely on a platform to open schools.

But by the time students returned this spring, a new flash point had emerged: Should police officers welcome students back to campus? Though it was a local tradition, some parents said their children, sensitive after a year of Black Lives Matter protests, felt afraid.

Ms. Goff asked the police to pull back. Dozens of people — including a school board candidate riding on a military vehicle — protested at the district office, some calling for her resignation.

Then in May, Ms. Goff said she came under fire for a plan to hold vaccine clinics at local high schools. Though she said the clinics were intended to reach low-income families and people of color, Ms. Goff said some people saw the effort as “making kids get vaccines.”

By the summer, a new school board had taken over and Ms. Goff was fired without cause. The school board chair, in an email, said Ms. Goff was not fired for her position on equity and diversity, but pointed to “divisiveness” and “underlying problems created by the district administration.”

Ms. Goff, who has worked in education for 26 years, said she had never seen so many political issues converge on schools. There was not just one contentious issue, she said. “It was every place you turned.”

This is hardly the first time the classroom has become the center of civil strife. From the teaching of evolution in the 1920s to the push for school desegregation in the 1950s, schools have often been a nexus for major societal conflicts.

“Schools are particularly fraught spaces because they represent a potential challenge to the family and the authority of parents,” said Natalia Mehlman Petrzela, an associate professor of history at the New School in New York City.

The two biggest divides in schools today are also highly volatile because they challenge fundamental narratives of what it means to be an American. The debate over mask mandates puts two values into conflict, collective responsibility versus personal liberty. And an examination of the country’s history of racism challenges cherished ideas about America’s founding.

The debates have been stoked in large part by politicians and political groups that are injecting partisanship into questions of education and public health.

At least nine states have banned or nullified mask mandates in schools, including Texas, where Gov. Greg Abbott, a Republican, is locked in a bitter fight with local school districts that are openly defying his order.

The battles have been particularly acute in Florida, where the Republican governor, Ron DeSantis, has threatened to withhold funding from schools that impose mask mandates.

“I want my child to go to school free and unmasked,” a woman shouted at a union official in Broward County last week, as protesters held up signs that said “My Body, My Choice” and “Masks = Child Abuse.” Broward County voted to require masks despite the governor’s order.

The rhetoric was also incendiary 300 miles away in St. Johns County, where masked parents demonstrated alongside small children and urged school officials to buck the governor’s order. “Dead children are not acceptable losses,” one sign read. After a school board meeting that stretched more than seven hours last week, masks remained optional.

“We have been handcuffed,” the school board chair said.

At the same time, at least 28 states, largely Republican-controlled, have moved to restrict education on race and history. Another 15 states, mostly run by Democrats, have moved to expand racial education, according to Chalkbeat, a nonprofit education news outlet.

Understand the State of Vaccine and Mask Mandates in the U.S.

Chicago will require city workers to be vaccinated, the mayor says.

Apple vehicles are driving around Canada to improve its maps