Home » Americas » The Small Colorado Town Shrugged Off the Pandemic. Then Came the Coronavirus Variant.

SIMLA, Colo. — This isolated ranching community on the high plains is the last place local residents expect to be first for anything, especially a new, more infectious variant of the coronavirus. But on Wednesday state health officials announced the first known case of the variant in the United States had been confirmed in a National Guard soldier sent to help with a Covid-19 outbreak at the town’s Good Samaritan Society nursing home.

A second soldier at the nursing home has tested positive and may also have the variant, Emily Travanty, the interim director of the state public health laboratory, said on Wednesday in a conference call with reporters.

All 26 residents of the nursing home and 20 of its 24 regular employees have tested positive for the coronavirus in recent weeks, and four residents have died. It was not clear whether the two National Guard soldiers were infected at the nursing home or had picked up the virus before they came to Simla. They arrived on Dec. 23, after most of the cases at the facility had occurred, said Dr. Rachel Herlihy, Colorado’s state epidemiologist.

Simla is an unlikely place for a virus variant only recently detected in the United Kingdom to turn up. Most things that happen don’t happen here. Trends come and go without notice. News is usually a thing watched from a distance. For generations this windswept stretch of short-grass prairie perched at 6,000 feet, about 80 miles southeast of Denver, has been shaped mainly by the timeless rhythms of raising cattle.

On Wednesday morning, after news of the virus in Simla had broken, a resident was asked what had changed on the town’s lone paved street in the 29 years she had lived there. She looked west toward the snow-dusted tangle of lawn mowers outside MT Small Engine Repair, then east, where a troop of wild turkeys was languidly crossing the main street in front of the entirely empty Coach-Lite Motel, and said, “Nothing.”

That stayed pretty much true when the virus arrived in the United States early in the year. Many of the roughly 600 residents of Simla went on with life assuming that, like most things that sweep the country, the pandemic would pass them by. 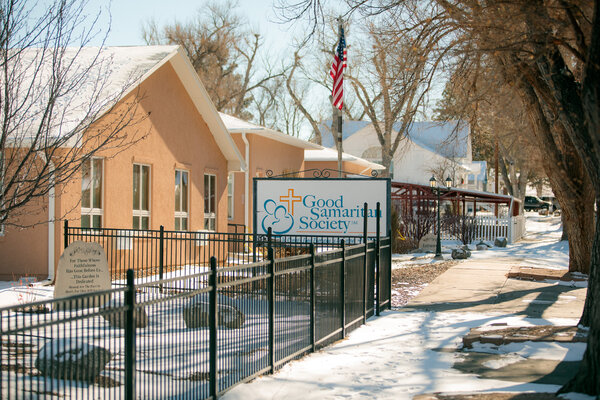 “When the virus first started in the spring, it was calving season and we were too busy to pay it much attention,” Don Bailey, a retired biology teacher who now runs black Angus cattle on a ranch outside town. “We were out checking the herd five or six times a day, and you don’t have to wear a mask when you are out with the cows.”

Summer passed with almost no cases in the county, and community life went on with little change. The 4-H members showed their prize sheep and cattle at the county fair, school stayed in session and the old-timers still met for coffee each morning at Simla’s lone breakfast spot, the Country Corner Cafe.

“We went ahead and canceled a supper we have with friends every Wednesday, but otherwise things have generally stayed the same,” Mr. Bailey, the 71-year-old rancher, said. Even with the pandemic, he kept open the one-man antique saddle museum he has built in an outbuilding on his spread — though the trickle of visitors would hardly break most social distancing regulations.

The town’s feeling of isolation from the global problem changed late this fall when a second wave of infections swept across Colorado and hit Simla and surrounding Elbert County particularly hard, sending it into the state’s “severe risk” threat level, where it remains today. Soon nearly everyone in this tightknit community knew someone who was sick.

“I have a friend in the I.C.U. right now,” said Cené Kurtchi, 71, who runs the cafe with her husband, Michael. “There are a lot of people in town who are sick. They’ll say it’s just the flu or bronchitis, but it’s 26 miles to the closest place where you can get a test.”

The response to the virus is shaped not only by geography but also by politics. President Trump won 74 percent of the vote here in November. Signs supporting him still sprout on nearly every block. One on the fence of a quiet side street read: “SAVE FREEDOM, VOTE TRUMP.”

In a pandemic in which precautions have become political, many residents refuse to wear masks. On Wednesday about a quarter of the shoppers going into the Simla Food Store had their faces uncovered, despite being only half a block from the nursing home where the entire patient population recently tested positive and the mutant virus surfaced.

Ms. Kurtchi shook her head when discussing the lack of masks. Some of her longtime neighbors have called for a boycott of the cafe because she and her husband require masks.

On Wednesday, television news crews gathered in front of the modest, one-story nursing home while cleaning crews in hazmat suits discreetly passed in and out through a back door where the strong scent of cleaning products wafted into an alley.

The state sent a team to the nursing home on Tuesday to collect new specimens from the residents and staff members. Based on the samples tested so far, Dr. Herlihy said, it does not appear that the variant is circulating in the facility, but more samples were being tested Wednesday.

The National Guard soldier confirmed to have the variant is isolating at home in Arapahoe County, in the suburbs of Denver, and the one with the suspected case is isolating at a hotel in the town of Limon to the east, Dr. Herlihy said.

In Simla’s lone craft shop, on a dirt road where the only visitors were a half-dozen local cats lounging in the winter sun outside the front door, the owner, Carla Tracy, had just gotten off the phone with a friend who’d told her the new variant had come to their town.

“My gosh, this itty-bitty town most people can’t even find on a map,” she said. “And we thought we wouldn’t have much trouble with the virus. Then it hit us. Just goes to show you it’s everywhere.”