It’s Friday. We’ll look at why traffic deaths in New York City have surged. We’ll also look back at a New York moment in baseball history — the shot heard ’round the world. 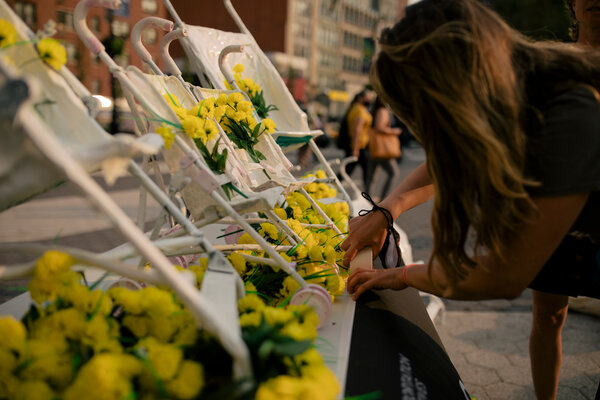 One of Mayor Bill de Blasio’s most ambitious promises was to make city streets safer. In 2013, before he took office, nearly 300 people had been killed in traffic deaths.

Fatalities declined in the first five years of his administration. But now, in the final 100 days of de Blasio’s tenure in City Hall, my colleague Winnie Hu writes that the streets are increasingly dangerous. A car kills a pedestrian every three days, on average. Traffic deaths have surged to their highest level in nearly a decade, up 26 percent in 2021 through Sept. 14, compared with the same period last year.

Officials blame speeding and reckless driving, but critics say the city has failed to make streets less hazardous. “It’s a real failure of leadership that his final year in office is ending with more traffic deaths than the first,” said Danny Harris, the executive director of Transportation Alternatives, an advocacy group.

Street safety experts say lax enforcement has contributed to the danger. “We’re like, ‘Where are the police?’” said City Councilman Ben Kallos, who represents the Upper East Side. Police officials said the department had been stretched thin during the pandemic, because officers had fallen sick or had been assigned to cover protests. Only recently was a hiring freeze lifted.

Under de Blasio, the city has squeezed in more bicycle lanes, which have transformed the streetscape and given many riders an alternative to unreliable public transportation. But the city streets can be perilous for cyclists: At least 12 have been killed by crashes this year.

The increase in traffic fatalities and the concerns about safety come as the city is beginning to prepare for another change that is likely to redefine the relationship between the city and the cars on its streets: a first-in-the-nation congestion pricing plan that would impose tolls on drivers who head into the busiest sections of Manhattan.

The potential benefits include fewer cars on the streets, assuming that drivers switch to public transportation rather than pay $9 to $23, according to the range that Allison de Cerreño, the M.T.A.’s deputy chief operating officer, has described at public meetings. There will be possible discounts during off-peak hours.

There are more cars on the streets than there were a year ago, increasing the possibility of accidents. Between September 2020 and the end of August, the number of newly registered vehicles soared by more than 120,000 compared with the previous 12-month period, according to state records.

City and state officials have taken some steps to target reckless drivers, including creating a citywide network of nearly 1,400 automated speed cameras in school zones. The mayor called on state lawmakers to pass a package of traffic safety bills that includes a provision to leave the cameras on around the clock instead of only during school hours, as at present.

The mayor, borrowing from a Swedish street safety strategy, announced his Vision Zero program in 2014 with the goal of eliminating traffic deaths by 2024. He maintains that Vision Zero will eventually transform the city’s unruly streets.

“It is the right model,” he told reporters recently. “It’s changed the behavior of drivers and we need to do a lot more to build upon it.” His likely successor, Eric Adams, the Democratic nominee for mayor, has promised to expand Vision Zero by installing more protected bus and bike lanes.

Usher in the weekend by enjoying another sunny day in the high 60s. Expect clear skies in the evening and temps in the mid-50s.

A second Cuomo investigation is expected to confirm harassment

The State Assembly’s investigation is expected to confirm allegations of sexual harassment against Andrew Cuomo, mirroring the findings of the state attorney general, Letitia James. Cuomo resigned in August. The final Assembly report, expected later this month, could revive calls for lawmakers to impeach Cuomo to prevent him from running again, though that seems unlikely.

Who is suing over New York’s vaccine mandate? In courtrooms from Manhattan to Utica, judges are weighing whether to carve out exemptions that would cover thousands of health care workers.

R. Kelly’s legal team appeared to employ tactics in his trial that recalled an earlier era, attempting to paint the accusers who testified as jealous, fame-seeking, promiscuous liars.

It was one of those where-were-you-when moments: A three-run blast that became known as the “shot heard ’round the world” after it zoomed off the bat of Bobby Thomson of the New York Giants on Oct. 3, 1951, 70 years ago on Sunday. It catapulted the New York Giants into the World Series with a 4-3 defeat of the Brooklyn Dodgers.

And it lived on, reaching people who were nowhere near the Polo Grounds that afternoon as an element of the Don DeLillo novel “Underworld” in 1997 and the subject of a 33-cent postage stamp in 1999.

In 2010, I wrote that it was the shot that gave birth to a baby. I interviewed a woman named Mary Tallmer, who said the story, told over and over when she was growing up, was that her mother had been at the game and had gone into labor. Her mother said it wasn’t so: She said she had delivered at 9:30 in the morning and had told her obstetrician, a Giants fan, “I did it for you, so you can still go to the game.”

I don’t remember asking whether the doctor made it to the Polo Grounds. But George Hirsch, the chairman of New York Road Runners and a founder of the New York City Marathon, did. He and three pals — two other die-hard Dodgers fans and a Giants fan — skipped school and went to the game.

The teams moved to California. The pain remains, 70 years later.

Twenty years ago, on the 50th anniversary of Thomson’s homer, The Wall Street Journal reported that the Giants had had a system for stealing signs from opposing catchers during the 1951 season.

But Thomson, who died in 2010, told The Times’s Dave Anderson that he had not taken the sign on that pitch. As he had told The Journal, “I was always proud of that swing.”

The historian Beverly Gage resigned from one of Yale University’s most celebrated and prestigious programs, citing donor pressure.

What we’re listening to: Eric Adams talks about his new book “Healthy at Last” and his vision for New York City should he become mayor, on today’s episode of “The Ezra Klein Show” podcast from Opinion.

It was the last day of summer at the Astoria Pool, and I already regretted not having gone more often. Slipping into the cool water always feels like slipping back in time, and another summer had passed with too few pool days.

I looked up at the Triborough Bridge to my left, the Hell Gate Bridge to my right and the blue sky above — the same view swimmers have been enjoying since 1936, except that today there are more trees.

Some things haven’t changed in all my visits: the Art Deco bathhouse, the wide bleachers (so perfect for sunbathing with a good book), the lifeguards spinning their whistles.

Some things have changed a little: The old-style lampposts now held planters of red geraniums and pale petunias.

Sometimes, change has been dramatic: The diving pool, which once hosted U.S. Olympic trials and sat empty for years, has been filled and tiled over and had people lying on loungers atop it, soaking in the summer’s last rays.

I stayed until the end of the day and watched the sunset, framed by the Triborough, cast gold ripples across the water and the lap swimmers.

A man who had been sitting nearby paused on his way out.

“You look sentimental,” he said.

“Last day, right?” he said wistfully. Then he smiled. “Have a good winter.”

Glad we could get together here. See you Monday. — J.B.

Artists who have told Donald Trump 'hands off our hits'

Coronavirus: Pandemic has set the number of air travellers back decades

WW2 refugee, 95, faced eviction for speaking to granddaughter from balcony