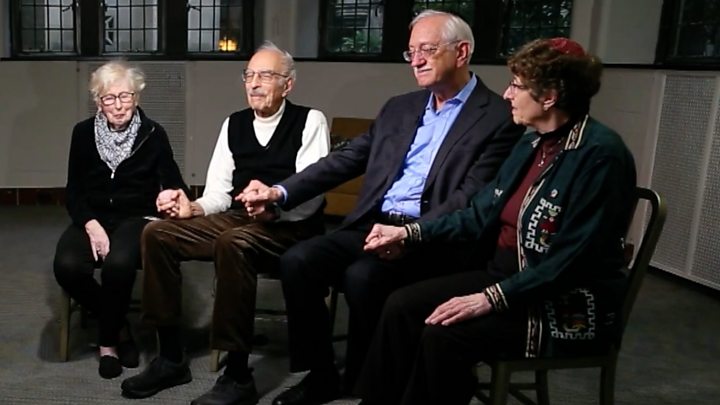 Last autumn, cards suddenly started appearing in some mail boxes of the well kept brick houses of quiet Squirrel Hill, a historic Jewish neighbourhood in the East End of Pittsburgh.

One side had a woman smiling next to a swastika. A message, “It’s not illegal to be White… yet”, and the image of a noose had been printed on the other. At the same time, stickers were found on benches in a nearby public park, saying “White People Rock!”

Alarms were raised. It was not the first time that residents of this tight-knit community, which dates back to the 1920s, had suffered anti-Semitic abuse; yet, some were left scared. The cards eventually stopped coming, the stickers were quickly removed to never be seen again, and life continued as normal.

Isolated words of hate, many thought.

But they were not, these families would tragically find out just one year later, as similar hostility, on the rise here and across the country, resulted in a massacre in one of their most sacred places.

“All Jews must die,” the suspected gunman reportedly said as he shot indiscriminately against worshipers gathered for their Sabbath rituals at the Tree of Life synagogue. Eleven people, aged between 54 and 97, were killed.

The deadliest anti-Semitic attack in recent US history hit the heart of this “vibrant Jewish oasis”, as some called it. For many in Squirrel Hill, and certainly elsewhere, it did not come as a total surprise.

Anti-Semitism on the rise

Anti-Semitic incidents increased 57% in the US in 2017 compared to the previous year, according to the Anti-Defamation League (ADL), with cases reported in every single state for the first time since 2010.

With alarming frequency, swastikas and messages like “Hitler was not wrong”, “Kill all Jews” and “No Jews” have appeared on synagogues, Jewish graves and homes and school campuses, terrorising their targets.

The messages left in Squirrel Hill had the name of the Creativity Alliance, a white supremacist group, and were one of the 1,986 incidents of anti-Semitism reported by the ADL nationwide last year. A sign, they said, that their perpetrators felt emboldened enough to break the law and carry out their acts.

“Anti-Semitism is a complicated, stubborn phenomenon,” said Jonathan Greenblatt, ADL’s chief executive. “[The cases] are disturbing and upsetting, and they demonstrate that we live in a nation where bigots still foment fear and hate.”

As to be expected, anti-Semitic speech has also increased online, where neo-Nazis, white nationalists, conspiracy theorists and others have found places to freely spread their messages in anonymity, despite notable efforts to limit them.

The alleged Tree of Life gunman, aged 46, had posted anti-Semitic content on the social network Gab, a place widely used by far-right figureheads banned from mainstream platforms. The bio on his account read “Jews are the children of Satan”.

Hostile rhetoric on the rise, too

The dramatic rise in anti-Semitic incidents comes as incendiary rhetoric by top politicians and other prominent personalities in the last few years have deepened tensions.

It is not a coincidence, many observers say, with some even blaming President Donald Trump for stirring divisions, a claim he has repeatedly denied – reacting to the shooting, Mr Trump called for national unity, angering those who say he is part of the problem.

The tragedy in Pittsburgh was the worst nightmare of America’s Jewish community which, last year, watched in shock white nationalists march in Charlottesville, Virginia, chanting “Jews will not replace us”.

“The political rhetoric [in the US] has headed toward the gutter. Things are being said that weren’t said before,” said David Harris, chief executive of the American Jewish Committee, an advocacy group. “Jews aren’t excluded from what has been happening.”

The anti-Semitic threat was also real from far-left and Islamist groups, he said, with a warning: if things did not change, we would all pay a heavy price.

The days before the attack had been particularly tense, and perhaps a sign of that. In Kentucky, a 51-year-old white man shot dead two African-Americans, aged 67 and 69, in a supermarket, after he tried to enter a predominantly black church in Jeffersontown. Officials are investigating it as a hate crime. 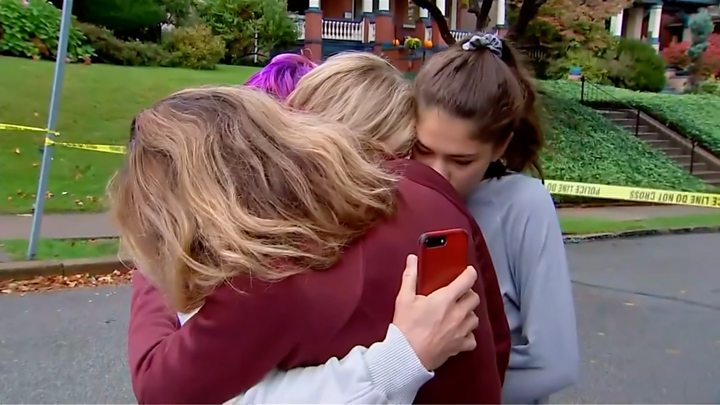 At the same week, a 56-year-old man allegedly sent more than a dozen explosive devices to critics of President Trump, including top Democrats, CNN and Hungarian-American billionaire and philanthropist George Soros, who is Jewish and has been vilified by many on the right for being a “globalist”.

In this perverse narrative, Mr Soros – who has been publicly criticised by Mr Trump himself – and other “globalists” are a nasty force who want to disrupt their predominantly white, Christian societies through unlimited immigration and, therefore, need to be defeated.

Hours before his rampage in Pittsburgh, the suspected gunman criticised refugee aid group Hebrew Immigrant Aid Society (HIAS), saying he could not “sit by and watch my people get slaughtered”. He now faces hate crime charges which could lead to a death sentence. 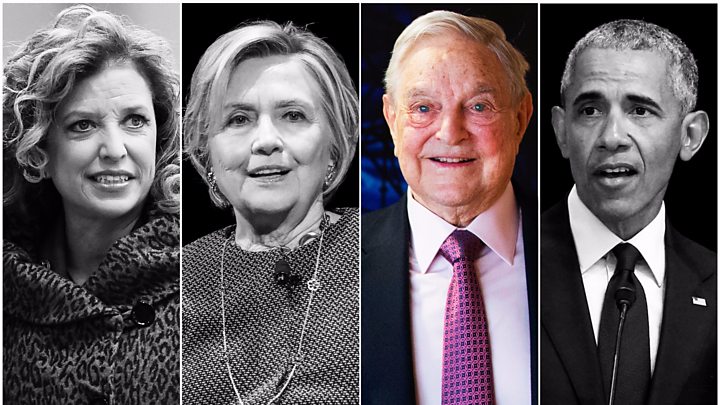 Tree of Life Rabbi Jeffrey Myers was at the synagogue when the attack happened and, this week, welcomed Mr Trump to Squirrel Hill, despite protests. Mr Trump was joined by First Lady Melania, his son-in-law, Jared Kushner, who is Jewish, and daughter Ivanka, who converted to Judaism when she married him.

Some of the demonstrators carried placards saying “Make America Kind Again,” a play with the president’s slogan.

“[But] this is not about politics. Hate doesn’t know political party, religion, colour, persuasion or anything,” said Mr Myers, who led the funerals of some of his own friends, shot dead at the synagogue.

“We do need to have strong leadership from all our elected leaders, not any one person, all of them from all political parties. We need to stop the hate.”

In the last decades, American Jews watched their fellows being targeted in Europe and thought they were relatively safe. Brutal attacks have taken place in France, which has the Continent’s largest Jewish community, Germany and beyond.

In the UK, the Labour Party has been embroiled in a long-running row over claims of anti-Semitism.

“I’m from Europe, it’s much more common everywhere. For Americans, it’s shocking because it’s unusual,” said 30-year-old Nathan Rittri, who lived a few houses from Tree of Life, as he walked with his wife and two young children to light candles in front of the synagogue on the morning after the shooting.

“It’s something that is part of the day-to-day lives in other countries.”

In some European cities, Jewish buildings are secured by armed officers and followers have adopted precautions, such as avoiding displaying religious symbols. (Mr Trump said the outcome in Pittsburgh would have been different if there were armed guards outside the congregation.)

It was still early to say if any measures would be taken in this country, and residents in Squirrel Hill were determined that nothing would change. For some others, though, change has already happened.

“There was a kind of wishful thinking here that we were somehow immune,” said Mr Harris.

“Pittsburgh, in a way, destroyed whatever innocence was left in American Jews.”

As Americans navigate conflicting Covid-19 mask advice, 'everyone is confused'

‘You Have to Go by the Law’: Alabamians Defend Arrest of Woman Whose Fetus Died in Shooting