Every December, the eyes of the world are drawn to New York City, where a glittering crystal ball in Midtown Manhattan marks a communal chance for a new beginning. Hundreds of thousands assemble in person; millions more watch on television, pausing for a moment to join an annual ritual.

With some excitement and anticipation, they turn their eyes to Times Square and begin counting along, starting at …

In March, as the pandemic swept through New York City, the groups in charge of the New Year’s Eve ball drop in Times Square realized that things were unlikely to proceed as planned.

Broadway, an industry at the heart of Times Square’s appeal, was shutting down for months. Large gatherings had been banned indefinitely, and several major city events had already been scrapped. Rumors were flying in text messages and on Twitter that officials might lock down the city.

Organizers knew that canceling the festivities would be devastating. New Year’s Eve in Times Square has become a symbol of a booming and vibrant New York City and has been at the center of the holiday for decades.

… months before this year’s celebration, it looked as if that collective ritual, one of the few that remain in an increasingly segmented society, might be threatened.

Tim Tompkins, the president of the Times Square Alliance, said organizers were determined to lower the ball from its perch above the city. They also knew that crowds would flock to the area as they had for more than a century, whether they planned a celebration or not.

What remained unclear was whether and how the event’s producers would adapt the night’s other customs — the performances, the crowds and the confetti — to the reality of the pandemic.

“We knew that we had to be prepared for a crowd no matter what,” Mr. Tompkins said. “And then it was just a question of ‘Oh my God, how are we going to do this?’”

Over months of planning, an answer emerged. This year, for the first time in decades, Times Square will be closed to the public on New Year’s Eve. Only production workers and dozens of selected frontline workers and their families will be permitted near the stage.

As it does every year, the city will close streets in the area, and police officers will operate checkpoints to prevent access. But instead of letting in visitors in drips, all uninvited guests will be turned away, with pedestrians limited starting at 3 p.m. on Thursday. 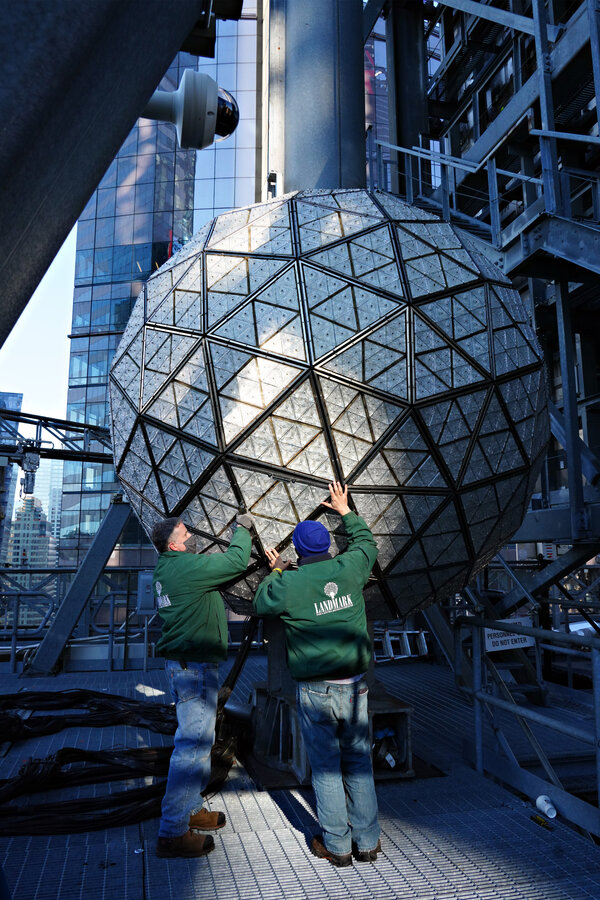 by-eight-foot pens will be spaced out at socially distant intervals on the streets. They will hold around 40 workers who kept the city and country running safely and smoothly in the year’s darkest hours.

On the guest list are a pediatrician at Elmhurst Hospital, a public hospital that was overwhelmed by the pandemic; a pizza delivery driver who became ill with the coronavirus; and Ronald Colbert, a Staten Island Ferry operator who will be attending his 40th Times Square ball drop.

“I am just so honored and happy,” said Mr. Colbert, 66, who worked through the pandemic. “The elements of the excitement that Times Square offers — I get to share that again.”

Avenue will not be packed with people trying to catch a glimpse of the outdoor concert, which will be staged according to state and industry guidelines for safe media productions.

This year’s musical guests include Gloria Gaynor singing “I Will Survive,” a disco classic resurfaced as a pandemic anthem, as well as performances by Jennifer Lopez, Billy Porter and Cyndi Lauper.

feet apart will remain the rule of thumb for the television workers who will broadcast Times Square’s billboards across the country. For those who remain stuck at home, “Dick Clark’s New Year’s Rockin’ Eve with Ryan Seacrest” will still rock on ABC. In a year without party banter, Anderson Cooper and Andy Cohen will again offer their New Year’s Eve buddy comedy act on CNN.

The TV networks will project the image of a Times Square transformed by the pandemic, one without the throngs of revelers in glittering gear who wait in the cold for hours to take part in a national spectacle.

Still, Mr. Tompkins and Jeff Straus, the president of Countdown Entertainment, which co-produces the Times Square event, both said it was important to them that an audience of some kind be present if circumstances allowed.

“There’s an energy that you get from watching other people being happy,” Mr. Straus said.

During the spring, when the pandemic ravaged New York City, photos of an eerily vacant Times Square became a grim meme. The deserted plaza became an enduring image of the crisis and a visual shorthand for the devastating circumstances the virus had wrought.

With 2020 closing and the calendar resetting, both men hoped they could provide a fresh start and a new narrative for one of the world’s most famous intersections.

“We want to show a city with a heartbeat,” Mr. Straus said. “And a city that’s alive.”

months ago, in July, Mr. Straus and Mr. Tompkins got the first hint that a celebration resembling those years past would be possible.

Times Square has been home to major New Year’s Eve festivities since as early as 1904, when hundreds of thousands gathered in Midtown Manhattan to watch fireworks light up the newly built New York Times Building, now known as One Times Square.

The ball was first dropped in 1907. Since then, it has been lowered on New Year’s Eve nearly every year, with breaks only in 1942 and 1943 because of World War II-related “dimouts” that required lights to be shut off as a protection against air attacks.

But even without the ball to watch, massive crowds still gathered at Times Square for more muted celebrations described in The Times as having a “weird quality” in the first year but “gayer” and “greater” the next.

“So much of the energy comes from the hordes of people,” said Mr. Tompkins, who has been involved with the ball drop since 2002. “And so there will definitely be a different energy in Times Square.”

Still, that there would be energy at all was hardly guaranteed. Though organizers continued to plan, they nervously watched as a number of similarly large events were canceled by Mayor Bill de Blasio and Gov. Andrew M. Cuomo.

days into July, however, the city worked with Macy’s to reconfigure its annual fireworks extravaganza.

For Mr. Straus and Mr. Tompkins, it was a clear signal that city officials were determined to preserve New York City traditions while keeping people safely at home.

The MTV Video Music Awards offered a template for musical performances. The Macy’s Thanksgiving Day Parade showed audiences welcoming a scaled-down tradition, and the Rockefeller Center Christmas tree lighting proved large-scale events could take place safely even amid a surge in the pandemic.

Those watching the New Year’s Eve ceremonies this year, whether on television or through the official online webcast, should expect a more intimate viewing experience, Mr. Straus said. (People seeking something more immersive can also download an app that uses augmented reality to bring Times Square home.)

blocks around Times Square will be used for this year’s celebration, a much smaller footprint than usual. That diminished scale will likely be clear on camera, Mr. Straus said. The sweeping shots showing a blocks-long street party will be axed. Close-ups won’t show smiles, Mr. Straus said, because faces will be covered.

For the first time in 26 years, Mr. Straus will not be in Times Square, showered by confetti when the clock strikes midnight.

In a break from tradition, he will watch on TV along with much of the country as it counts down the end of a brutal year and looks to make a fresh start in the next …

‘He left his bike and took mine’: Regina sees rise in bicycle thefts