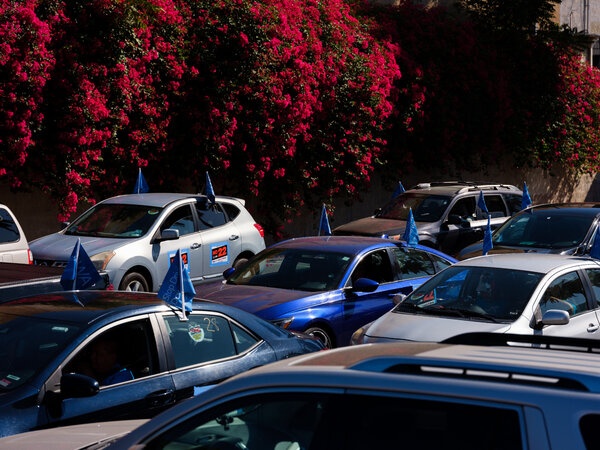 Proposition 22 — whose supporters and opponents have collectively raised a staggering $204 million, according to the California Secretary of State’s office — is both.

Most of that has come from three companies: Uber, Lyft and DoorDash, whose leaders have spent months locked in a bitter battle with the state over a law passed last year meant to give gig workers more benefits and protections by requiring that they be classified as employees rather than contractors.

[Read more about the new law.]

The ballot initiative, and all the money they and other gig work companies have thrown at it, would allow those companies to essentially exempt themselves from that requirement, but give drivers some benefits.

A poll released in late September showed that 39 percent of likely voters supported the measure, while 36 percent said they’d vote no. A quarter were undecided.

My colleague Kate Conger has followed the fight since last year. I asked her to put the final stretch into context. Here’s what she said:

You’ve covered Assembly Bill 5 (as the gig work law was called) and now Proposition 22, and it seems as if it was clear from early on that Uber and Lyft were going to fight these new rules. Has anything about the way the fight has played out surprised you?

The sheer amount of money that the companies have poured into the fight is surprising — they promised $90 million at the beginning and the total has now gone up to more than $185 million. It’s the most that’s ever been spent on a California ballot proposition, which I think speaks to how desperately the companies want to win.

The terrain of the campaign is also different. The companies are pushing out messages in traditional ways, like TV ads and mailers, but also in their own apps. They have a captive audience that their opponents can’t access.

[Read about how Lyft and Uber threatened to shut down in California.]

There’s been a lot of discussion about the potential national implications of Proposition 22. How might the results shape national labor policy?

No matter the outcome of Proposition 22, it’s just the beginning of what I think will become a national debate over regulating gig work. Companies like Uber and Lyft are already beginning to lobby for similar changes at the federal level.

It also raises questions about how traditional employers will manage their workforces in the future. Will we see employers shift their employees to a gig work model in order to take advantage of the reduction in costs that Uber and Lyft have long enjoyed?

[Under pressure, Uber and Lyft considered a franchise-like model.]

What will you be watching going forward?

If Uber and other gig economy companies are successful in obtaining favorable legislation via the ballot — even after the state Supreme Court and the State Legislature have found that their workers should be employees — I will be curious to see what other tech companies follow suit.

They can clearly outspend any opponent, and I wonder if we’ll see a spate of other tech companies pushing ballot initiatives. I’m also looking forward to the federal debate about how gig work should be regulated.

Do most drivers actually oppose Proposition 22? (Or vice versa?) I genuinely can’t tell, given that I’ve been bombarded with ads from Lyft and Uber saying drivers support it, but labor groups have vehemently opposed it.

This is a very complex question. Uber and Lyft say that their drivers overwhelmingly favor Proposition 22, and independent polling on driver sentiment usually shows mixed results (these kinds of polls are often regional, or drawn from small sample groups).

I think the easiest answer is that some drivers support the measure, and others oppose it — there isn’t consensus on the measure among all drivers. When we’re thinking about drivers, it’s helpful to remember that there’s only a relatively small number of them who have made a career out of gig work.

I’m not a pollster, but in my experience talking with drivers, there’s a real split between how full-timers and part-timers view Proposition 22. A lot of other people try it for a few weeks and then move on, or open their apps only occasionally, and there’s a lot of turnover in this group. Many of those part-timers don’t want to be employees.

[See The Times’s full voter guide for Californians, with information about how, when and where to cast your ballot.]

But drivers who make their living on gig apps really feel pinched by the lack of employment protections — they can’t take paid sick days or parental leave, they have no health insurance, they don’t earn overtime when they drive more than 40 hours a week. Opposition to Proposition 22 tends to be higher among those drivers who spend more of their time working for Uber and Lyft.

There is also a lot of uncertainty about what the future of employment could look like for gig workers. They know what work is like for them now, but the companies have made a number of threats about how they might treat workers in the future if they were forced to comply with the current California law. For instance, they’ve talked about trying to prevent drivers from working for both Uber and Lyft, when many drivers currently switch back and forth between the apps when they’re looking for rides.

Because switching apps is popular with drivers, we don’t know if Uber and Lyft would actually prevent it in an employment model. But for drivers, it creates uncertainty about the future, and many of them feel more comfortable sticking with the system they know.

In some ways, I think the state bears blame for this alongside the companies. The legality of the gig employment model has been in question since these companies’ founding. But California and other states moved slowly to clarify and enforce the law, creating an environment where this uncertainty could thrive and become cemented in drivers’ lives.

Find information about all the propositions, including who’s putting money behind which side. [CalMatters | The Los Angeles Times | SFGate | Official voter information guide]

Los Angeles County is still firmly in the state’s most restrictive reopening tier. But officials announced that some restrictions would be eased, and that more students would be able to return for in-person instruction. [The Los Angeles Times]

It’s going to be a long couple of weeks. Might as well learn how to meditate, if you don’t already know how. Here’s a guide.