If you’ve been following the college admissions scandal, you’ll recall that one of the alleged schemes carried out by William Singer, the figure at the center of the investigation, and the parents he worked for, was faking standardized test results.

But if you’ve ever taken a college-entrance exam — with all the attendant security precautions — you may be wondering how that would actually work. My colleague, Jennifer Medina, recently went to a West Hollywood school to find out:

On an early morning in June 2017 a teenage girl got on a plane in San Jose and flew to Los Angeles, arriving at a testing center in West Hollywood to take a college-entrance exam.

While most students take their entrance exams at large public high schools near their homes, the Henriquezes chose a private institution, the West Hollywood College Preparatory School.

It was one of two testing sites where Mr. Singer cultivated relationships with test administrators who would accept bribes, according to court documents. For $10,000 per test, and sometimes more, the documents say, Igor Dvorskiy ensured that students could be given answers from the proctor.

On a visit this week, nothing at the school suggested it was the site of one of the biggest testing scandals in decades. It is tucked inside a small building of a large old synagogue. The entrance to the school is a solitary white door with a small blue sign emblazoned with its name.

The school’s website describes it as offering a “‘cradle-to-college’ education by providing a family-like nurturing academic environment with small class sizes.” Mr. Dvorskiy is listed as the director of the school.

The court documents make clear that federal investigators closely monitored the school for several months, tracking Ms. Dvorskiy on the days of the college entrance exams with Mr. Singer’s clients.

Typically, Mr. Singer would tell his clients “fabricate a reason — such as a bar mitzvah or a wedding — that their children purportedly needed to take the test in Houston or West Hollywood instead of at their own schools,” according to court documents.

“The extent of the fraud that took place at this testing center should be a major red flag to the College Board,” said Alexis Redding, a visiting scholar at the Harvard Graduate School of Education who has studied college admissions. “There has always been tremendous variability in the quality and professionalism of testing sites and that opens the door for cheating to occur. Students tend to know which sites have inattentive proctors or lax policies.” 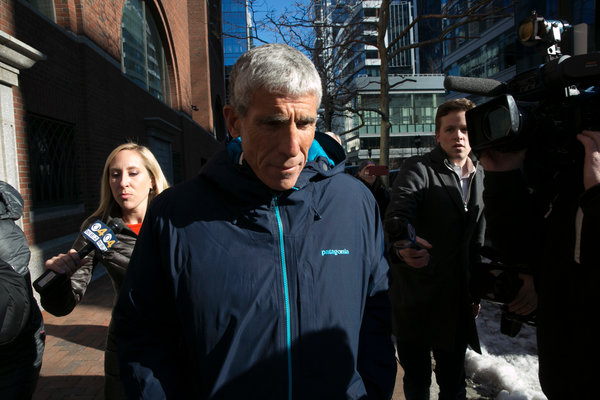 • As college consulting expands and more parents pay for outside advice, what role should high school counselors play? It’s becoming harder to draw the line: One counselor in Irvine estimated that 15 to 20 percent of seniors at his school hired outside help. [The New York Times]

• Experts disagree about whether the parents accused of paying bribes to get their children into selective colleges will face time behind bars. They could make deals that would allow them to get community service and probation. Or prosecutors may want to make an example. [The Associated Press]

• Powerhouse research institutions in California like U.C. Berkeley and U.C. San Diego are among a growing number that are cutting ties with Huawei, the Chinese telecom giant that has been accused of spying and secretly doing Beijing’s bidding. The company had been a major donor. [The Los Angeles Times]

• A U.C. Berkeley student who worked for the Cal football team is alleging she was sexually harassed by coaches and players. The university says it’s investigating the claims, which were first posted on social media. [The Mercury News]

• Disney is now, well, the exact opposite of a mouse. With the closing of its $71.3 billion acquisition of 21st Century Fox assets, the Walt Disney Company goes from behemoth to colossus. And it needs to be, in order to stay alive in a world dominated by big tech. [The New York Times]

• Now, layoffs have begun at Twentieth Century Fox, and in a surprise move, Disney said it would close Fox 2000, the label under Fox known for mid-budget features like “Hidden Figures,” “Walk the Line” and “The Devil Wears Prada.” [The Hollywood Reporter]

• Hi Duk Lee, the businessman who started L.A.’s Koreatown with a restaurant and market that became gathering places for the city’s growing Korean community, has died. [L.A. Taco]

• You might be getting bitten by mosquitoes earlier in the season in the Sacramento area. Here’s why. [The Sacramento Bee]

• While Facebook and Twitter have promoted efforts to combat misinformation, hate and conspiracy theories, that content has flourished on Instagram meme accounts, where teens and kids are exposed to the ideas through algorithmic daisy chains. [The Atlantic]

• In all the debate about affirmative action and admission to elite universities, there’s one group that is consistently forgotten: low-income Asian-Americans. [The Washington Post Magazine]

• Anh Do, a Los Angeles Times journalist, grew up bundling editions of the Nguoi Viet Daily News, the newspaper her father founded that both traced and helped build a Vietnamese community in America. After 40 years, she remembers its legacy. [The Los Angeles Times]

Now that it’s spring, some of us have gotten colds or the flu or had reactions to allergies. Hopefully you’re not one of them. But even if you’re feeling fit as a fiddle, may this weekend recommendation from Tejal Rao, The Times’s California restaurant critic, bring you comfort:

I didn’t know I suffered from seasonal allergies until this week, when pockets of Los Angeles kicked into bloom and a fine layer of yellow pollen settled on my car. Between sniffles and sneezes, I find myself dreaming of one place in particular: Nyum Bai in Oakland.

The cup of prahok ktiss, a dip of pork belly and coconut milk, slick with fragrant oil, layered with the flavors of fermented fish paste, would be just the thing to snack on today with a whole basket of crunchy vegetables. And the comforting, balanced broth of the kuy teav phnom penh would make for a steadying dinner.

The chef, Nite Yun, is Cambodian, and fled the Khmer Rouge with her family as a child — Mayukh Sen wrote about her and the restaurant here, if you’d like to read more.

Drought in US south shows first improvement in weeks