Home » Americas » The winds in Kansas are whipping up wildfires and dust storms. 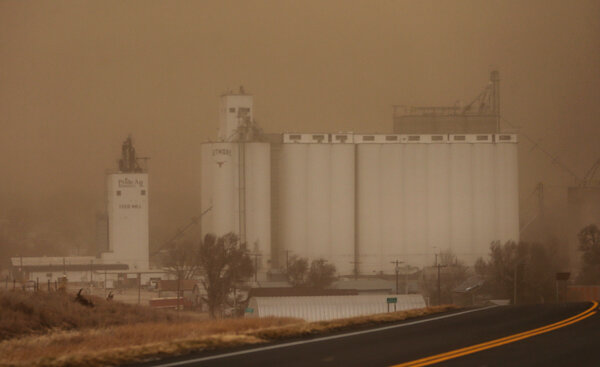 The same storm system generating tornadoes in the central United States also spawned high winds in Kansas that were the cause of dust storms and — by knocking over power lines — several wildfires, the authorities said.

Winds reaching as high as 100 miles per hour generated fires throughout the western and central parts of the state, said Jane Welch, a spokeswoman for the state’s Division of Emergency Management. At least one home was destroyed, she said, but no deaths or injuries were reported by Wednesday night.

Eric Metzger, a meteorologist at the National Weather Service in Wichita, said the biggest fire on satellite imagery is in Russell and Ellsworth Counties in central Kansas, where two fires had “merged together into one massive fire.”

“It’s probably about 40 miles long,” he said, adding that the fire was moving eastward.

He said that before Wednesday, Kansas had not had any rain for over a month. The state has seen fires in December, when the weather gets dry, but this felt different.

He said the same storm system that generated rain and tornadoes could also whip up fires because the Gulf of Mexico had blocked moisture from moving north.

Ms. Welch said the winds were so strong on Wednesday night that it was too dangerous for emergency crews to fight the fires from the air. The smoke had already gotten so bad that it could be detected up north in Nebraska, the National Weather Service there said.

In addition to the fires, which prompted several evacuation orders, high winds have blown over eighteen-wheelers and dust storms have whipped through the state, hindering visibility, Ms. Welch said.

“It’s a little crazy in Kansas today,” she said.

For the love of football: Fans gather in Edmonton ahead of Grey Cup Sunday