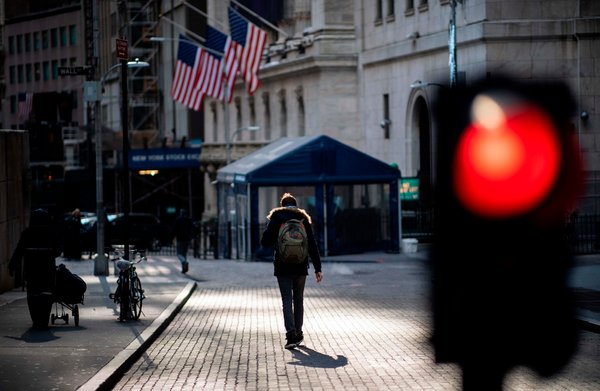 Fears of an imminent recession, which caused major turbulence in financial markets at the end of 2018 and beginning of 2019, have eased a bit.

That’s the good news. The bad news is what that episode exposed.

For much of 2018, it appeared that the world economy was finally getting out of the rut it had been stuck in for the decade since the global financial crisis. But it now looks as if the era of persistently low growth, low inflation and low interest rates isn’t over after all.

In the past week alone, the European Central Bank said that economic risks had “moved to the downside,” and the Bank of Japan cut its projections for inflation.

The Federal Reserve will hold a policy meeting Tuesday and Wednesday, and is likely to leave its interest rate target unchanged. Its leaders could also discuss their broader strategy for making monetary policy, which may include keeping more of their giant portfolio of bonds — accumulated during its years of stimulus efforts — than analysts had once expected.

Despite some promising signs of vitality during much of last year, issues that have dogged the world economy for the last decade — an aging work force in many of the biggest economies, weak growth in productivity, excessive global savings and industrial capacity, and a shortage of worldwide demand — haven’t disappeared.

That helps explain why American workers’ wages have been rising relatively slowly despite a low unemployment rate. And it makes for a perilous time: Low growth rates mean the economy could slip into recession more easily, and low interest rates mean central bankers would find themselves with less powerful tools to lessen the pain of a future downturn.

“This shows that the forces that are restraining many economies are a lot harder to contend with and more pervasive than many people were hoping or believing,” said Roberto Perli, a partner in Cornerstone Macro. “It’s bad news for the work force’s earnings prospects in many countries and for those who hope for a reversal of the growing inequality trend that has been in place for many years.”

Consider that markets went haywire in the final weeks of 2018 in significant part because of fears that the Federal Reserve was raising rates by more than the economy could handle. Jerome Powell, the Fed chairman, played a big role in fueling a stock market rebound when, on Jan. 4, he pledged that the Fed would adjust policy “quickly and flexibly” as conditions warranted.

His predecessor, Janet Yellen, went so far as to say recently that “it’s very possible we may have seen the last interest rate hike of this cycle.” But what does it mean when a mere 2.4 percent interest rate — the rough level of the Fed’s target after a December increase — is enough to risk breaking the economy?

The story is even more pessimistic in the European Union, where interest rates are slightly below zero and yet growth is faltering.

With the world economy heavily reliant on stimulus to achieve even meager growth, there is little cushion for a negative shock. In particular, it makes the United States more vulnerable to recession caused by any number of factors, including government shutdowns and trade wars.

Adam Posen, president of the Peterson Institute for International Economics, said, “If this is what growth and investment look like when there is relatively loose monetary and fiscal policy — especially in the U.S. — the underlying strength just isn’t there.

“That doesn’t mean policy is ineffective or ill-advised. Things would be much worse, unnecessarily, if policy tightened a lot. But it is scary to think of the world economy absent macro support,” meaning the stimulus provided by low interest rates and large deficits.

Last year began with signs of a new economic era. In early February, the stock market was falling amid concerns that the United States economy was overheating; that wages and prices would start rising too fast; and that the Fed would need to raise interest rates faster to rein things in. Shifts in bond markets suggested investors were betting on higher future inflation, and on higher interest rates in the distant future than in the near future.

For the first time in ages, most of the major advanced and emerging economies were enjoying simultaneous growth surges. As 2018 progressed, inflation in the United States finally moved back up to the 2 percent level that the Federal Reserve targets, and the Fed’s pattern of once-a-quarter rate increases became mostly a nonevent in markets.

It was starting to look as if the old economic rules — that low unemployment would translate into higher inflation, that large government deficits would crowd out private investment — were becoming true again.

But in the sell-off that knocked about 10 percent off the S&P 500 from the start of October to Christmas Eve, long-term interest rates fell by more than half a percentage point. Bond prices pointed to lower future inflation, as did plunging oil prices.

The expected annual inflation rate in the next decade — reflected in the price of inflation-protected bonds — rose to 2.18 percent in April 2018 from 1.66 percent in June 2017. It hovered in the 2.18 range for a few months, then plunged in late October to a recent low of 1.7 percent.

At the same time, weaker growth in China — a reported 6.6 percent in 2018, still strong by American or European standards — removes a source of strength for the global economy. China is trying to wean itself off debt-driven growth.

“Chinese policymakers are well aware they probably have a credit bubble and have tried to be more temperate in response to the current slowdown,” said Julia Coronado, president of MacroPolicy Perspectives. “But it is hard to accept low growth potential. We see the political instability that that brings around the world, and China is now faced with the uncomfortable decision of re-initiating stimulus or living with notably slower growth.”

The world economy is not in crisis. Low growth is better no growth — or outright contraction.

But what the last few months have made clear is that the forces that have held back the global economy for the last 11 years are not temporary, and have not gone away. And that, in turn, makes the world uncommonly vulnerable to a bout of bad luck or bad policy.

The low-growth world was not just a phase. It’s the new reality beneath every macroeconomic question and debate for the foreseeable future.

Neil Irwin is a senior economics correspondent for The Upshot. He previously wrote for The Washington Post and is the author of “The Alchemists: Three Central Bankers and a World on Fire.” @Neil_Irwin • Facebook

What happens to a body donated to science?