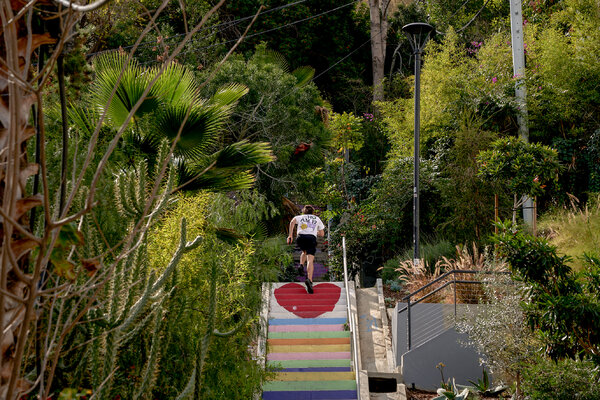 Californians are in a kind of limbo right now.

We know Covid-19 cases and hospitalizations have continued to decrease, but we’re waiting for the state’s reopening process to run its course. We know more vaccine doses are on the way, but many of us are waiting to become eligible.

Parents are waiting for schools to reopen, but there are still debates about how to do that safely.

[Track the vaccine rollout across the country.]

Sit tight, our leaders have told us. Answers are coming. Hope is on the horizon.

Over the past year, when it has felt as if I’m stuck in place, I’ve found that taking a walk is at least one (admittedly literal) way of moving forward.

And earlier in the pandemic, when parks, hiking trails and even beaches were closed and roped off, I, like a lot of people, started walking around my neighborhood.

At some point, we got a copy of the book “Secret Stairs: A Walking Guide to the Historic Staircases of Los Angeles,” thinking it might be a neat, under-the-radar way to give some shape to the meandering; the stairs connected people who lived in the hills with the public transportation running below in the era before many of them had cars.

[Read more about how an “awe walk” can do wonders for your well-being.]

But soon, I started noticing friends posting from their stair walks on Instagram. We got a second copy of the book for Christmas. The friend I was going to regift it to already had one. On a walk near the Silver Lake Reservoir one recent weekend, I spotted an older man with a dog-eared copy of the book and a younger couple with a fresh volume.

It seemed that the “secret” stairways in Los Angeles, and in the East Bay, as detailed in the sequel, were, well, not so secret.

Recently, I talked to the author of the book, the journalist Charles Fleming, about the response to the books in the pandemic.

Tell me about how you decided to write a book of Los Angeles stair walks.

The first book came about, really, because I was having health problems. I was up for my third spinal surgery in three years. I told my doctor, I can’t do it. I’m sorry. I’m going to try this other thing, and the other thing was walking.

It started helping. I’m inherently very lazy, so I sort of started to make a game out of trying to locate all the staircases, thinking there were probably 16 or 20 of them. What I found was there were about 60 staircases in Silver Lake, and I decided maybe I’d better just keep going.

Friends of mine would ask what I was doing, then started walking with me. One of them eventually said, “Look, why isn’t this a book? You write books for a living.” I said, “I’ve been walking out here for eight years and I haven’t seen anybody.”

So that’s a long way around saying I’ve been surprised at the interest in the book from the very beginning.

What has the response been like specifically in the pandemic? Like when parks were closed, did you anticipate this would be a big moment for the books?

I didn’t anticipate it at all. I am not very entrepreneurial. I’ve led walks for years and I’ve never charged for them. It was, “Let’s just be a community.”

In May of last year, I was starting to get notes from people saying, “I can’t thank you enough for the book, it’s really saved our lives. Because the gym is closed, and the tennis courts are closed and the park is closed. I can’t take my kids to the playground and I can’t take my dog to the dog park.”

So I got lots and lots of letters, including one from a person in Berkeley, I think, who had a cousin. And the cousin had met, wooed and planned to wed this woman in a relationship that had been built around the stairs.

I won’t ask you to pick a favorite walk. So what’s the most surprisingly strenuous walk in each book?

I mean, Walk No. 42 in the Los Angeles Secret Stairs — it’s the one that goes down to the old Rustic Canyon’s Murphy Ranch. It has a pair of staircases that are over 500 steps each. It’s wickedly, wickedly hard.

What about the East Bay? I feel like they must be harder on average.

Yeah and I think that might be. The Grizzly Peak walk, Walk No. 12, just goes straight up.

On the other hand in the East Bay, the payoff — where do the stairs go? They go uphill. If you’re going uphill, you’re going east. If you’re halfway up the staircase and you turn around, what do you see?

Well, you see Berkeley, Oakland, the Bay, the Bay Bridge, San Francisco, the Golden Gate Bridge. The views are staggering from practically every staircase in the book. I think the views up there are better than the views down here.

Which ones are the most changed in each since you first published the books? (Los Angeles in 2010 and the East Bay in 2011.)

The character of Oakland is changing quickly. So I think Walks No. 19 and 20, Lake Merritt, Broadway and Oak Glen Park. Those have become more gentrified.

And then in Los Angeles, probably the Highland Park walks, No. 7 and No. 8.

In a closely watched case with wide-reaching implications for California’s migrant farmworkers, the majority of the Supreme Court justices seemed uneasy with a state law that allows union organizers to come to work sites. [The New York Times]

See images of confusion, then anguish as migrant families are deported by surprise.

A tree falling on a Pacific Gas and Electric transmission line was declared the cause of the deadly Zogg Fire, which killed four people in Shasta County in September. [The Sacramento Bee]

Volunteers have hit the streets of South Gate and ducked into restaurants in Chinatown in a huge, very analog effort to get the most vulnerable Angelenos vaccinated. [The Los Angeles Times]

Contra Costa County has joined Solano County in expanding vaccine eligibility to anyone 50 and older. [The San Francisco Chronicle]

The Oscars won’t have a single host. Instead, high-profile presenters will give out the awards on a rotating basis. [Deadline]

A Multimillion-Dollar Payday, at the Carwash

Report: Sessions and Rosenstein were aggressively in favor of separating migrant families at border