Home » Americas » Their Own Private Idaho: Five Oregon Counties Back a Plan to Secede

Political divisions in Oregon can to a great degree be measured by a river, the Deschutes, which winds its snaky, circuitous way through the state’s midsection. The river divides the high prairies of the eastern half — agricultural and politically conservative, largely — from the wetter, woodier western half, which has long been more populated and more liberal.

The statewide shutdown orders that accompanied the coronavirus pandemic last year deepened those divisions, crippling businesses at a time when some rural counties had few cases. The protests and riots over race and police conduct in Portland, the state’s largest city, widened the gap further still, and the defeat of former President Donald J. Trump, who won most counties but still lost the state by a big margin after President Biden’s strong showing in the cities, capped off a litany of frustrations.

This week, all of that led thousands of east-bank residents to a single resonant but highly improbable word: secession. A majority of residents in five eastern counties said in nonbinding votes that they would like to leave Oregon and join with their more like-minded conservative neighbors further east in Idaho.

“Those of us in rural Oregon are written off,” said Mike McCarter, a retired agricultural nursery owner who has led the secession drive.

Talk of gathering up grievances and divorcing has long been a staple of American politics. Rural upstate New York regularly threatens to sever ties with the more liberal city of the same name; Californians have long toyed with splitting their state in two; Texas, which always wants to go larger, sometimes talks of leaving the United States entirely.

The “Greater Idaho” movement that spurred the special election vote on Tuesday has also been simmering for years, but it has picked up steam amid the growing political polarization that accompanied the November presidential election and the fractious debates over government response to the pandemic.

Voters in two other counties, Union and Jefferson, voted last fall to address the question of a border change, a process that will begin with public meetings in the counties, with one set for June. 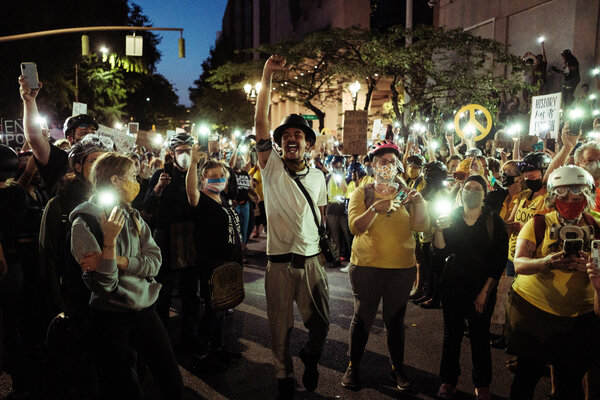 Mr. McCarter, 74, who bought a gun club in retirement and now helps people to get their concealed carry permits, said that eastern Oregon, despite what Congress did in setting the state’s borders more than a century ago, really is more like Idaho. Adding rural Oregon’s voice to Idaho’s, he said, would benefit conservatives and give them a strengthened heartland in the northwest. “We just want to come alongside them and bolster the conservative support,” he said.

The odds against success are long. Oregon’s Legislature, which is dominated by Democrats, who also control every statewide office, would have to go along with it, as would Idaho’s Republican-dominated Legislature — not to mention the U.S. Congress.

The proposal could also face serious economic headwinds: Recreational marijuana is legal in Oregon but not in Idaho, which has led to a tax revenue boom on the Oregon side, where Idahoans travel to buy. (There is even a drive-through weed store in the town of Ontario, the largest community in Malheur County, an hour’s drive from Boise.) Oregon also has no sales tax, a fact that leads many Idahoans to cross the border to shop.

Grant, Baker, Lake, Sherman and Malheur Counties, the five currently in revolt, are huge in area but minuscule in population and thus political clout at the capital in Salem. The counties contain 63,000 people over about 26,000 square miles, an area about the same size as Massachusetts, Connecticut, New Jersey, Rhode Island and Delaware combined.

“These are really small places, and tough places to make a living,” said Tim Duy, a professor of economics at the University of Oregon.

Recent demographic trends have not worked in their favor, with essentially flat or slightly declining populations across the past several decades even as urban centers in Oregon, especially Portland, exploded with growth.

The few rural places that have grown in that part of the state — notably Bend, a former timber town in central Oregon bisected by the Deschutes River — have shifted largely to the left as newcomers arrive, many of them from Portland. A new Covid diaspora, as thousands of people left urban spaces to telecommute, or to hide from the pandemic, has further fueled Bend’s drift away from its neighbors, with a housing boom that is among the strongest in the state.

For eastern conservatives, it has all been like watching a train pull away down the tracks, leaving them behind. All five of the would-be new Idaho counties voted strongly for Mr. Trump in November — topped by Lake County, where he got nearly 80 percent of the vote — only to see the state’s Electoral College votes go to the Democratic candidate; Mr. Biden won 10 counties and lost in 26, but the 10 included Portland.

“Most of us in rural Oregon realize that whatever the Portland/Willamette Valley area wants, they get,” Mr. McCarter said. “Do we have the freedom to vote who we want to govern us? That’s the question.”

While occasional talk of secession has accompanied the polarization of politics across the country, dreams of remaking the American map have been particularly resonant in the West, where state borders were late in coming.

In the late 1930s, residents of Wyoming, Montana and South Dakota dreamed of forging a conglomeration of like-minded communities into a new state that would call itself Absaroka. The idea of a vast new political entity called Cascadia that would stretch up through the Pacific Northwest into Canada has fluttered in the regional consciousness for decades. More recently, residents of Northern California and southern Oregon hatched the idea of a state that would be called Jefferson.

“In previous decades it was the southern counties, now it’s the east, but it’s the same feeling — feeling powerless,” said Bruce A. Weber, the recently retired longtime director of the Rural Studies Program at Oregon State University. “The desire to have influence and respect is universal, and it’s part of what is driving a lot of behavior in this country right now.”

Part of the argument for shifting the borders, according to Citizens for Greater Idaho, which organized the secession ballot measures, is that conservatives are fleeing liberal areas to join Americans in more conservative areas. (Witness the latest exodus of Californians to Texas.)

Why not, the group suggests, give the conservatives more room?

“Adding Oregon counties to Idaho will take some pressure off Idaho’s housing market,” the group said, “giving people more counties to choose from as they move into Idaho to gain political refuge from blue states.”