At the headquarters of SL Green, a real estate company in Manhattan, employees walk the halls with masks on, line up with proper spacing for free lunch and sit at cubicles behind plastic barriers that rise up well over six feet.

Birthday parties are celebrated in the office — but over Zoom, with snacks available to be picked up and eaten by employees in front of their computers. Workers can even bring their children into the office for remote schooling, to be supervised by tutors paid by the company.

“They each have their own offices,” Francisca Lopez, a property accountant, said of the setup created for her 6-year-old son, Ian, and a handful of other children out of empty office space. “It’s the best incentive for me to come to work every day.”

SL Green is one of a small number of companies in New York City that have required workers to return to the office during the coronavirus pandemic, at least for some tasks, a list that includes other real estate firms as well as some banks and international companies like JP Morgan Chase and L’Oréal.

Some corporate leaders, frustrated by working from home and eager for their expensive spaces to hum again, have been offering increasingly generous incentives to bring employees back. The reasons are varied — real estate firms, for example, have a vested interest in demonstrating the safety of office work by engaging in it themselves — but employees and company representatives said it came down to the value of in-person collaboration.

“Working at home was quite isolating,” said Steve Doan, 34, who works in marketing for L’Oréal out of its Hudson Yards offices. “I get people interaction, I get those casual meetings, instead of scheduling a quick 10-minute conversation, I can just shout across the hall and get a yes or no answer.”

But months after state rules allowed office workers to return to New York City, most desks still remain empty. Roughly 85 percent of office workers remain at home, according to recent real estate executives and a survey of large business owners, a figure that may be an undercount.

Companies in New York have been slower to return to the office than those in other big cities like Dallas and Los Angeles. An analysis of key-card entries in thousands of office buildings in 10 cities found that only San Francisco — where tech companies have embraced working from home — had a lower office occupancy than New York.

And the specter of a second wave hitting the city has dampened expectations of a substantial change this fall, especially after a sharp rise in cases in some areas of Brooklyn and Queens prompted localized shutdowns. 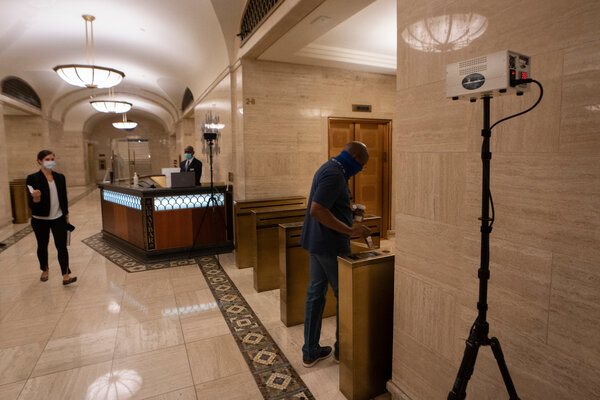 An increasing number of firms, seeing little impact on productivity from remote work, have pushed back their plans for returning to the office until next summer, including Ford Motor Company and The New York Times.

The companies that have brought people back have attempted to support those employees with new perks.

Bloomberg LP, whose executives — from former mayor Michael R. Bloomberg on down — prize in-person work, will pay for commuting costs of up to $75 each day, or about $1,500 in a given month.

“People, I believe, do want to come into work, but they have to know that they get their basics covered,” said Marc Holliday, the chief executive of SL Green, which owns vast swathes of commercial real estate in the city.

“When you really peel it away, work from home, this concept of everyone, of everybody isolating at home, and all the inefficiency it brings, is in my mind a very slow cancer that is very silent but growing on this economy,” Mr. Holliday said.

The absence of office workers, who have mostly kept their jobs but work at home, has hurt neighborhoods and businesses that are reliant on the daily flood of deskbound commuters.

That unusual emptiness in parts of New York City has contributed to real and perceived increases in trash, graffiti and disorder on some streets, particularly in Manhattan, and prompted the chief executives of large business to ask for more action from Mayor Bill de Blasio last month.

At the same time, the vast majority of those who have been showing up in person to work — particularly those deemed essential, including grocery store workers and delivery people — have not been offered perks to do so, and are often paid less than those working from home.

Despite state rules permitting offices to open up to 50 percent of their capacity that have been in place since the summer, neither Mr. de Blasio nor Gov. Andrew M. Cuomo has made a strong push for more office workers to return, out of apparent concern that virus cases could spike.

Mr. de Blasio has so far not required city workers who are remote to return to their offices, even as he has celebrated the ribbon cutting at One Vanderbilt, a new office skyscraper developed by SL Green.

“Midtown is important, but it’s not the center of our universe,” Mr. de Blasio said in a radio interview this month, pointing out the “vibrancy” of neighborhoods outside Manhattan. “The minute we think it’s safe, we’ll start to bring back government employees to the offices.”

At Hearst, less than 5 percent of the New York tower staff has come back, a spokesman said. About 20 percent of the employees at JPMorgan’s New York offices have returned on a rotating basis, including senior managers in sales, trading and other departments, according to a spokesman.

L’Oréal had a rocky start to its office return over the summer and has since settled on a system in which employees come to the office two weeks each month, but with additional days to work from home. About 15 percent of the staff is in the office at any time, a spokesman said.

“The hard thing about it is when I do go into the office, most of my team is at home, so I still have to do all of my meetings virtually,” said one 29-year-old employee at Hudson Yards, who requested anonymity because she was not authorized to speak to the media. “Gradually every week, there are one or two more people in the office.”

While most office workers who can stay home are remaining there, employees at the city’s large real estate firms — the Related Companies, the Durst Organization and others — have mostly been brought back to the office.

SL Green is one of the most prominent examples of what some companies will do to bring people back.

The entire office staff has returned to its headquarters, with a few exceptions.

On a Friday last month, employees were served individually boxed pizza and plastic bowls of salad from a local restaurant for lunch. The company offers in-home child care for families and helps pay for employees to park near the office, subsidizing half of the monthly garage rate. About a fifth of the workers are using the garage perk.

But among the most unusual amenities is the educational pod for employees’ children to do remote learning.

Edward V. Piccinich, the company’s chief operating officer, said he believed physically being in the office was essential for motivation and a feeling of shared purpose.

“You can’t wake up and get out of bed and say, ‘I work for SL Green!’” Mr. Piccinich said. “Neither can Facebook or anyone else. For me personally, the collaboration and the interaction, without that, thinking you can do it in your pajamas or your underwear, it doesn’t happen.”

As he exited an elevator, Mr. Piccinich ran into a colleague wearing a mask and had the kind of banal but fortuitous encounter that can only happen in the office.

“Let’s try to connect today — I know we were trying to get each other,” he said to the fellow employee, who worked in the company’s acquisitions department.

“Yes, yes, if you’re around this afternoon,” she said.

Some employees sat at their desks with masks on; most had them off.

“It took a little while for everyone to get used to putting the masks back on” when getting up from the desk, said Lynne-Courtney Hodges, vice president for human resources. “I think it was a lot of forgetfulness, but it’s becoming second nature.”

While SL Green has brought its entire of staff of about 190 back to its Lexington Avenue headquarters, many of its tenants in the building have yet to do so. The lobby on a recent Friday morning appeared to have more security guards — conspicuous by their identical face masks and spacing — than arriving workers.

Even so, bringing back any number of employees carries with it the chance that someone will become infected. Companies have put in place rules and protocols for quarantining close contacts whenever a positive case emerges among the staff, as it did at JPMorgan earlier this month.

“While we haven’t had a meaningful increase in cases, we’ve limited the capacity of our buildings, and we won’t hesitate to reverse course if we start to see worrying trends,” said Brian J. Marchiony, a spokesman for JPMorgan.

SL Green has had one such positive case so far, over the summer; that employee’s close contacts at work were told to stay home and get tested, Mr. Piccinich said. No other cases have so far emerged.

“You could pick up anything anywhere,” he said.

‘She Asked Where I Was Headed. Just Wandering, I Said.’