Home » Americas » ‘They Have No One’: At 88, a Transgender Icon Combats Loneliness Among Seniors

MEXICO CITY — The pink paint of her stairwell is peeling, the black metal banister chipped, but Samantha Flores is as sharp-witted as ever amid a profusion of climbing plants and bursting red flowers.

At 88, the Mexican transgender icon remains elegant, funny and at times flirtatious, sitting at a small round table on the landing outside her tiny Mexico City flat where she has received callers, at a safe distance, throughout the pandemic.

After nearly nine decades as a socialite, a manager of a gay bar, an L.G.B.T.Q. advocate, and much more, Ms. Flores has a large community of longtime friends and neighbors who come knocking.

“Without my friends, I wouldn’t be who I am,” she said.

But as Ms. Flores well knows, many seniors are not so lucky. And so there is one part of her world that she’s aching to get back — the drop-in center she founded and runs to help older L.G.B.T.Q. adults combat their isolation. It was the first organization of its kind in Mexico.

Last March, the center shut down when the coronavirus began sweeping through the country. The Mexican government has promised to vaccinate all seniors by the end of this month, but in some Mexico City neighborhoods, vaccinations have just begun.

So Ms. Flores is still waiting.

“My greatest wish in the world is to reopen,” she said.

Founded three years ago, Vida Alegre, or Happy Life, as the center is called, offered meditation, grief therapy, meals, a movie club and tech training. But more than anything, Ms. Flores said, it gave lonely elders a sense of community

“The older adult, in general, suffers from two things: loneliness and abandonment,” she said. “They are a nuisance to their family.”

For older lesbian, gay, bisexual and transgender people, who came of age in a different era and might have been rejected by their relatives, the isolation can be even worse.

“They have no one, absolutely no one,” Ms. Flores said. 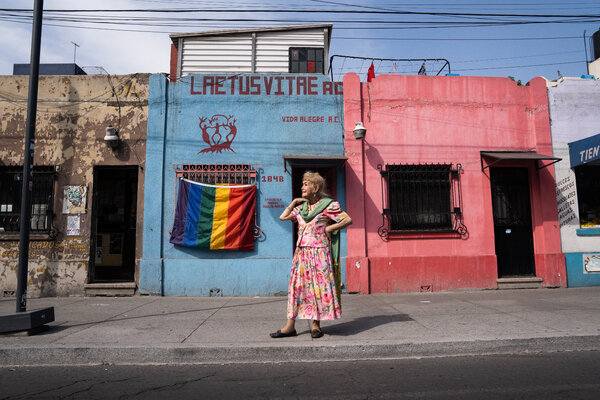 In the past year, Ms. Flores has become something of a celebrity. She was profiled by Vogue Mexico last June, and was later featured in a campaign for the fashion house Gucci.

But for Ms. Flores, the glamour and attention are just new platforms to talk about what’s most important to her — Vida Alegre, and the rampant discrimination still faced by Mexican trans women, which often makes sex work their only means of making a living.

“It’s society’s fault that trans women have to work on the streets,” she said. “They aren’t given any other option.”

When coupled with machismo attitudes and widespread gang violence, discrimination can also be deadly for trans women in Mexico, which regularly ranks among the most dangerous countries in the world for transgender people. Few are lucky enough to live as long as Ms. Flores has.

But luck, it seems, has often been on Ms. Flores’ side.

Born in the city of Orizaba in Veracruz state in 1932, Ms. Flores grew up in a house with a yard full of orange, guava, lemon and avocado trees. She described her childhood as idyllic. Her family was tacitly accepting even then of what she called her effeminate nature, she said.

But behind her back, there were always whispers from neighbors and schoolmates, Ms. Flores said, and after graduating from high school, she couldn’t wait to leave Orizaba.

“What I wanted was to get out of that damn town and away from those damn people,” she said. “I realized that I was criticized and singled out for being queer.”

Ms. Flores moved to Mexico City, where she began dipping into the capital’s nascent gay scene of the 1950s and ’60s.

One night in 1964, Ms. Flores was invited to a costume party, and together with a few friends, decided to go in drag. She chose the name Samantha for her persona after Grace Kelly’s character in the film “High Society,” which featured music by Cole Porter, her favorite singer.

“I liked Samantha because of the double meaning,” Ms. Flores said. “Bing Crosby called her Sam, which can also be short for Samuel.”

The host of the party was a friend of Ms. Flores, Xóchitl, then one of the most famous trans women in Mexico, who Ms. Flores says, had connections to the rich and powerful that allowed her the freedom to hold extravagant parties for the L.G.B.T.Q. community.

“She was the one that opened the door for trans women,” Ms. Flores recalled.

Little by little, Ms. Flores appeared in public as Samantha until, eventually, she was Samantha.

“I became myself, I found my true personality,” she said.

Soon, Samantha Flores was a staple of the Mexico City club scene.

“She was always a very, very elegant woman,” recalled Alexandra Rodríguez de Ruíz, a transgender rights activist and writer who was a teenager when she started going to gay clubs and encountered Ms. Flores. “Always wearing beautiful dresses and always accompanied by handsome young men.”

Back then, Ms. Rodríguez said, being part of the L.G.B.T.Q. community in Mexico was even more dangerous; the police would regularly detain trans women on the street or raid gay bars and confiscate their belongings.

“There was a lot of persecution,” she said. “Sometimes, if they were bad cops, they would take you to someplace and rape you or beat you.”

But Ms. Flores said she managed to avoid trouble. Whether it was that she could easily pass as female or because of her friendship with the well-connected Xóchitl, she was never bothered by the police.

Still, Ms. Flores said she felt uneasy being a trans woman in Mexico, and decided to move to Los Angeles. For several years in the 1970s and early ’80s, she lived between Mexico and L.A., where she worked managing a gay bar, among other ventures.

By the time she came back to Mexico full-time in the mid-’80s, the AIDS crisis was in full swing.

Seeing the crisis facing her community inspired her to become more of an activist.

“I became a fighter,” she said.

At first, Ms. Flores volunteered at an AIDS charity, and later began raising money for children with H.I.V. and women facing violence in northern Mexico, collecting funds at theater performances, including “The Vagina Monologues,” which ran in Mexico for years.

Then, a few years ago, a friend of hers suggested that she create a shelter for older L.G.B.T.Q. adults.

“That’s when the spark was lit,” Ms. Flores said.

It took years of wading through the Mexican bureaucracy and finding the right venue, but eventually she was able to secure rent on a one-room building on a busy street in the Álamos neighborhood. Vida Alegre now stands there, the building painted bright blue with a rainbow flag out the front.

The community has grown to some 40 people, about half of whom are straight and go there only for the company.

“It’s empathy and being together,” that brings people in, Ms. Flores said. “Abandonment and loneliness have fled.”

Besides reopening Vida Alegre, Ms. Flores has one other wish.

“I’m waiting for Prince Charming on his white horse and silver armor to come and serenade me,” Ms. Flores said. “I’ve been living here for 35 years, with the windows open, waiting for him. But he still hasn’t come.”