Home » Americas » They Say Only Tourists in New York Look Up. Prove Them Wrong.

One of my favorite spots in New York City has always been the glass-tiled floor of the Brooklyn Museum. During the museum’s First Saturdays, I would often flop onto one of the frosted squares in the museum’s Beaux-Arts court to stare up at the glorious skylight. (The court is closing July 19 — still time to catch it! — and will reopen in September with the museum’s Christian Dior retrospective.) 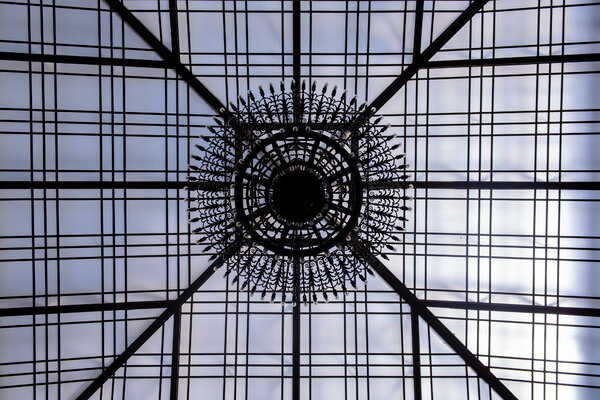 Some of New York’s best ceilings are already famous — like Grand Central Terminal’s celestial vaulted ceiling (fun fact: There are some inaccuracies; bring a star map and see if you can spot them) and the dreamy paintings above the New York Public Library’s Rose Main Reading Room (which reopened Tuesday and can be explored on free tours) — but there are others tucked away in lesser-known spots.

The Museum at Eldridge Street, a restored synagogue in Chinatown, has ornate 50-foot ceilings above gorgeous stained glass. The Morgan Library & Museum also has elaborately detailed ceilings in the library — my favorites are in the East Room and the Rotunda.

Village East Cinema, one of the last of New York’s buildings that originated as a Yiddish theater, also has a stunning ceiling in the upstairs theater, if you’re heading there to catch a screening. (Kings Theater in Brooklyn has a ceiling that’s ogle-worthy as well; reopening is planned for the end of August.)

The Guastavino tile ceilings of Old City Hall are a bit more exclusive and can be seen only on member tours of the Transit Museum.

Looking for something open-air? Elsewhere, the concert venue and party space in Bushwick, Brooklyn, also has a fantastic rooftop with food and drinks if you’re interested in catching live music this summer.

For park lovers in Brooklyn, Prospect Park’s recently restored Concert Grove Pavilion has a colorful star-shaped stained glass skylight, and the ceiling of the Bethesda Terrace Arcade in Central Park is covered in tiles that were originally used on the floors of European cathedrals.

The High Line, on the West Side of Manhattan, also offers free tours on Tuesdays, Wednesdays and Saturdays in the summer if you’re curious about the park's history and design.

And though New York isn’t the best place to see the stars (thanks a lot, light pollution!), the Hayden Planetarium offers showings of “Worlds Beyond Earth” every hour on the half-hour. I also love taking a blanket deep into the fields of Prospect Park in Brooklyn, hoping to spy a planet or the occasional shooting star.

Free fun: Manhattanhenge, when the sunset lines up with Manhattan’s street grid, happens on Sunday and Monday at 8:20 p.m. Big cross streets, like 57th, 42nd, 34th, 23rd and 14th Streets, are the best spots for spectators and photo-op seekers.

Movie night: Watch “The Truffle Hunters,” which our critic A.O. Scott called “an enchanting documentary about men and their best friends,” at Quad Cinema on Thursday at 4:45. p.m.

In Brooklyn: Park Slope’s Fifth Avenue has expanded its Open Streets program, which means that a stretch of the avenue will be closed to traffic every Saturday and Sunday, starting this weekend.

In Queens: Get a Pashtun staple from the Chapli & Chips halal cart — it’s parked on Hillside Avenue in Glen Oaks.

For date night: Watch a movie atop the Old American Can Factory in Brooklyn. Rooftop Films is showing “Taming the Garden,” a new documentary by Salomé Jashi, on Friday at 8 p.m.

With friends: Kayak in Brooklyn Bridge Park every Wednesday and Thursday from 4:30 to 7 p.m. and Saturdays from 10 a.m. to 3 p.m. (Family-friendly kayaking is on Sundays at noon.)

Solo fun: Spend your Saturday morning doing yoga on the steps of the Brooklyn Museum. (Tickets are $16 and include admission to the museum.)

And if you need a getaway: Check out Sarah Sze’s instillations (and the massive lawns) at the Storm King Art Center in the Hudson Valley.

What do you want to hear from us this summer? Are there events or venues we should know about? Send us a note at [email protected], or let us know in the comments.