Fresh out of high school, he was hired as a sales associate in Midtown Manhattan at Journeys and then at Zumiez, two fashion stores popular with young shoppers. He moved on to Uncle Jack’s Meat House in Queens, where he earned up to $300 a week as a busboy.

Then Mr. Rosado, 23, was laid off in March when the steakhouse shut down because of the pandemic. He was called back after the steakhouse reopened, but business was slow. In August, he was out of work again.

New York City has been hit harder by the economic crisis set off by the pandemic than most other major American cities.

But no age group has had it worse than young workers. By September, 19 percent of adults under 25 in the city had lost jobs compared with 14 percent of all workers, according to James Parrott, the director of economic and fiscal policy at the Center for New York City Affairs at The New School.

Young adults have been especially vulnerable because they were overrepresented in the service industries that have been decimated by social distancing restrictions.

While workers under 25 made up just 10 percent of the city’s total work force of 4.8 million before the pandemic, they held 15 percent of the jobs in the hardest-hit service industries, including restaurants, retail stores, and arts, entertainment and recreation businesses, Mr. Parrott said.

The consequences of losing a job for workers just starting out can reverberate for years, leading to lower wages, fewer job prospects and financial hardship and instability, especially for those already burdened with college or credit card debt, according to economists and youth employment experts.

“You could see the impact of this on the younger generation long after the fact,” said Jennifer Mishory, a senior fellow at The Century Foundation, a left-leaning policy research institute.

The job struggles of young workers also have broader implications for the overall economy, said Stephanie Aaronson, a vice president and director of economic studies at the Brookings Institution and an author of a recent report on this issue.

“It’s going to take longer for younger people to find productive employment, which is obviously a financial loss to them and their families,” she said. “But on top of that, the economy is going to suffer. It holds back economic growth.”

The national picture mirrors what is happening in New York.

Workers under 25 filed slightly over one million claims in October for regular state unemployment benefits — not including pandemic assistance — compared with nearly 80,000 for the same month last year.

Mr. Rosado applied for dozens of jobs on Craigslist and Indeed.com. He landed interviews with a Wendy’s restaurant and a self-storage warehouse. Still, no job.

“For the most part, I wasn’t getting called back on anything,” said Mr. Rosado, who lived with relatives in Queens and collected unemployment benefits of $160 a week. “Everyone’s fighting for the same positions.’’

Finding work will likely only get harder with the virus surging across the country, leading to tighter restrictions on indoor dining and nonessential businesses that could result in more layoffs and fewer job openings.

Seedco, a national social services organization, has scrambled to help more than 400 young adults find work in the New York, Memphis and Baltimore regions during the pandemic. Of those, 65 have been placed in jobs with essential businesses, including UPS, FedEx and Uber Eats.

“The rapid speed at which this economic struggle has happened is like nothing before,” said Keith Rasmussen, the executive director. His group’s job placements for young adults are down by roughly two-thirds this year largely because young workers have been pushed aside by a flood of older, more experienced job seekers.

State and city officials said they were helping young adults through existing job programs and services, including offering businesses a state tax credit for hiring unemployed, disadvantaged youth. In addition, new courses are being developed to help people of all ages learn job skills online.

“We know the value of connecting young people to jobs, career readiness and other important life skills, especially during the Covid-19 pandemic and the economic downturn,” said Mark Zustovich, a spokesman for the city’s department of youth and community development.

The pandemic job losses have especially hurt young workers who are Black, Hispanic or do not have a college degree — they have even higher rates of unemployment than younger workers as a whole, Ms. Aaronson’s report found. They are also more likely to be struggling because their families do not have the resources to support them.

“The reality is for the young adults who were having trouble finding employment before the pandemic, the pandemic put them further behind,” said Gregory J. Morris, the executive director of the Isaacs Center, a social service provider in New York.

Sapphire Cornwall, 20, got her first job in 2018 as a sales associate at a branch of The Children’s Place in the Bronx. She lost it in March when the store closed during the pandemic and never reopened.

She initially collected $650 a week in unemployment benefits after taxes, more than she earned at her job, but that shrank to $125 a week after a federal supplement of $600 ended in July. Since then, she has used up more than $1,600 in savings to cover her rent and groceries.

Ms. Cornwall has applied for other jobs, including at Bed Bath & Beyond and Dollar Tree. “Right now, they want people who know the job, they don’t want to train you,” she said. “When they look at your résumé and see you don’t have much, it’s a problem.”

Young adults could often get around their lack of experience before the pandemic by showing up in person and making a good impression on potential bosses.

But now, “you virtually have no opportunity to go to employers and say, ‘Hey, here I am,’” said Raymi De La Cruz, the youth work force program director for BronxWorks, a social service agency that has helped Ms. Cornwall.

At the height of the pandemic, with the temporary federal supplement, some young adults “were seeking unemployment benefits because they were assured more money in some cases than when they were working,” said Van Miles, director of work force development at Union Settlement, a social service agency in East Harlem.

In New York, they could collect up to $1,105 a week, including the temporary $600 federal supplement — or nearly double what a minimum-wage worker earned.

Now that is no longer the case. As their finances become more precarious, many young adults are not only finding a tougher job market but also fewer options for in-person job programs, support services and training classes.

Some jobs programs have pivoted to focus on work that has weathered the pandemic, such as for delivery drivers, security guards, construction workers and home health aides.

Still, many young adults have been shut out of these jobs because they do not have a driver’s license or required professional certifications — and getting them is not easy with many driving schools and training classes scaled back or suspended during the pandemic.

“From March until now, almost everything has been at a standstill — except for bills,” said Kristina Coleman, the director of a youth program at The Children’s Village, a social service agency that serves young adults in New York.

Things have gotten so bad that some social service and community groups that normally steer young people to jobs and internships elsewhere are instead hiring them.

The Red Hook Initiative, a nonprofit community organization in Brooklyn, places young adults in paid internships with small businesses and social justice groups. But with few places taking new people, it is now paying many of them $15 an hour to work in the community, including giving out free food from its urban farm and handing out face masks and hand sanitizers.

Knowledge Westbrooks, 23, said the work kept him afloat after he was laid off in March from a warehouse in Brooklyn where he coordinated delivery routes. “I wasn’t able to pay for food and stuff so I had to try to figure out another opportunity,” he said. 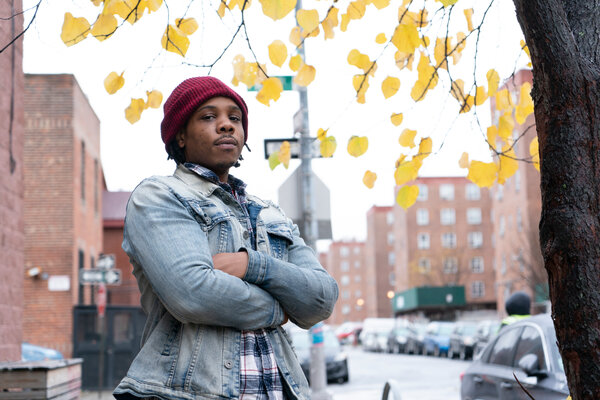 The Isaacs Center started a culinary training program this year before the pandemic to prepare young adults to work in five-star kitchens. But with many restaurants closed or operating with limited dining during the pandemic, some of the budding chefs are now taking their skills to the prepared foods sections of Whole Foods.

For the first time, the center has also hired many of the young workers for its own community kitchen, which was expanded to feed older people and low-income families.

Mr. Rosado signed up for the culinary training program this fall after spotting an ad on Craigslist and recently started interning for $15 an hour at a Harlem cafe.

He worries about job security in a restaurant industry that has been decimated by the pandemic. But he said the risk was worth it to do something that he enjoyed.

“I like the idea of catering to someone and making sure they feel welcome and cared for,” he said. “I feel like it’s my niche.”

Over a million Florida ex-convicts can begin registering to vote

Push to reform US police intensifies ahead of George Floyd funeral

American anxiety over coronavirus spikes along with record high cases