Home » Americas » ‘This Is a War’: Cross-Border Fight Over Water Erupts in Mexico

BOQUILLA, Mexico — The farmers armed themselves with sticks, rocks and homemade shields, ambushed hundreds of soldiers guarding a dam and seized control of one of the border region’s most important bodies of water.

The Mexican government was sending water — their water — to Texas, leaving them next to nothing for their thirsty crops, the farmers said. So they took over the dam and have refused to allow any of the water to flow to the United States for more than a month.

“This is a war,” said Victor Velderrain, a grower who helped lead the takeover, “to survive, to continue working, to feed my family.”

The standoff is the culmination of longstanding tensions over water between the United States and Mexico that have recently exploded into violence, pitting Mexican farmers against their own president and the global superpower next door.

Negotiating the exchange of water between the two countries has long been strained, but rising temperatures and long droughts have made the shared rivers along the border more valuable than ever, intensifying the stakes for both nations.

The dam’s takeover is a stark example of how far people are willing to go to defend livelihoods threatened by climate change — and of the kind of conflict that may become more common with increasingly extreme weather.

Along the arid border region, water rights are governed by a decades-old treaty that compels the United States and Mexico to share the flows of the Colorado and Rio Grande rivers, with each side sending water to the other. Mexico has fallen far behind on its obligations to the United States and is now facing a deadline to deliver the water this month. 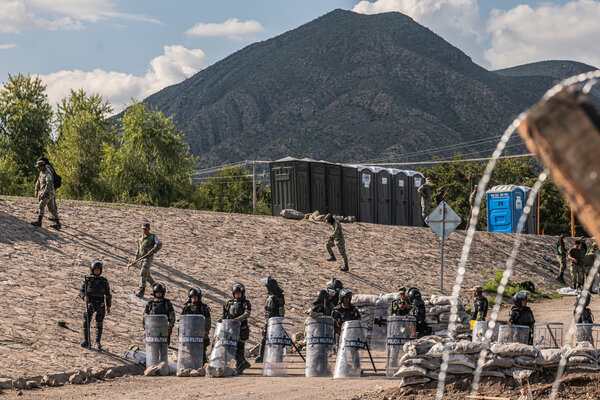 But this has been one of the driest years in the last three decades for Chihuahua, the Mexican border state responsible for sending the bulk of the water Mexico owes. Its farmers have rebelled, worried that losing any more water will rob them of a chance for a healthy harvest next year.

“These tensions, these tendencies, are already there, and they’re just made so much worse by climate change,” said Christopher Scott, a professor of water resources policy at the University of Arizona. “They are in a fight for their lives, because no water, no agriculture; no agriculture, no rural communities.”

Since February, when federal forces first occupied the dam to ensure water deliveries to the United States continued, activists in Chihuahua have burned government buildings, destroyed cars and briefly held a group of politicians hostage. For weeks, they’ve blocked a major railroad used to ferry industrial goods between Mexico and the United States.

Their revolt has alarmed farmers and politicians in Texas. Greg Abbott, the state’s Republican governor, appealed to Secretary of State Mike Pompeo last month, demanding that he persuade Mexico to deliver the water by the deadline next week, or risk inflicting pain on American farmers.

Mexico’s president, Andrés Manuel López Obrador, who has repeatedly bent to President Trump’s demands on immigration, has vowed that his country will make good on its water obligations to the United States — whether the state of Chihuahua likes it or not.

He sent hundreds of members of the National Guard to protect Chihuahua’s dams, and his government temporarily froze bank accounts belonging to the city where many of the protesters live.

For farmers, the government’s stance is a betrayal.

Mr. Velderrain, 42, said he never saw himself as the type of person who would lead hundreds over a hill to overwhelm a group of soldiers protecting a cache of automatic weapons. But there he was in a video posted on Facebook, escorting a Mexican general out of the Boquilla Dam on the day he led the takeover, which saw the National Guard, surprised and heavily outnumbered, quickly surrender. Later that day, one protester was shot and killed by the National Guard.

“We have always dedicated ourselves to work; we’ve never been known as protesters,” Mr. Velderrain said back on his farm, shucking an ear of corn that wasn’t quite ready for harvest. “What happened at the Boquilla dam was impressive, because we took off our farmer clothes and put on the uniform of guerrilla fighters.”

The federal government argues that the protesting farmers are also hurting other Mexicans by preventing water from flowing to their compatriots downstream, and that the growers would still have access to at least 60 percent of the water they need for next year.

With the intensity of the drought in Chihuahua this year, Mexico has fallen far behind on its water shipments to the United States. It now has to send more than 50 percent of its average annual water payment in a matter of weeks. The Mexican government insists it will still comply, despite the takeover of the dam, which spans the Conchos River, a major tributary of the Rio Grande. But some Texans have their doubts.

“It’s just not going to happen, unless a storm develops and helps Mexico, which is normally what they count on,” said Sonny Hinojosa, the general manager of an irrigation district in Hidalgo County, Texas. “They gamble and hope that a storm or mother nature will bail them out.”

Texans also contend that, on balance, Mexico benefits more from the water-sharing agreement between the two countries, signed in 1944, than they do. Mr. Abbott, the state’s governor, has pointed out that the United States sends Mexico about four times as much water as it receives from its neighbor.

The treaty doesn’t punish either side for shirking its duties but, eager to avoid conflict, Mexico is scrambling to find a way to meet its water obligations as the deadline nears. One of the likeliest solutions is that Mexico will hand over a significant amount of the water it owns in reservoirs, normally used by more than a dozen Mexican cities. In exchange, Mexico has asked the United States to lend it drinking water for those cities, if Mexico ends up running out.

Part of the problem, scientists say, is that Mexico’s need for water has grown since the signing of the North American Free Trade Agreement in the 1990s, as more people settled in the country’s dry border region and agricultural production ramped up to satisfy American consumers.

Francisco Marta, a 23-year-old who manages his father’s corn and alfalfa fields, suspects that his fellow farmers don’t have the Mexican president’s sympathies in the water dispute because they are generally not members of his poor and working class political base. The farmers live in the north, traditionally a stronghold of the conservative opposition against Mr. López Obrador, who ran on a leftist platform.

“He believes that we are rich and that nothing will happen to us if we don’t work next year, but that’s not true," Mr. Marta said. “I myself will migrate if I don’t have anywhere to work here.”

Mr. López Obrador has accused politicians and “big agriculture” of fomenting strife in Chihuahua, which, he said at a recent news conference, “has nothing to do with small farmers.”

But Jéssica Silva, 35, the protester who was killed the day the farmers took the Boquilla Dam, didn’t have a farm of her own, her parents said. She and her husband, Jaime Torres, rented about 22 acres of pecan trees and helped her parents cultivate an even smaller plot.

“She had so many plans,” said Ms. Silva’s mother, Justina Zamarripa, tears falling into the creases of her cheeks.

The National Guard shot Ms. Silva several times in the back through the window of her husband’s truck. He was wounded but survived.

“She was defending what belongs to us,” said her father, José Luis Silva.

In a photo her parents have of the two just after the attack, Ms. Silva is slumped over in the passenger seat, wearing her seatbelt and a mask to protect against the coronavirus.

“She was always so cautious,” her mother said.

Pentagon chief ‘did not favour’ Boeing