Welcome to Crossing the Border, a limited-run weekly newsletter from The New York Times. Like what you see? Send this to a friend. If someone forwarded it to you, sign up here to have the next issue delivered to your inbox.

‘I love La Gordiloca, and I love her truck’

By Simon Romero in Laredo, Tex.

Some here in the Texas border city of Laredo drive special-edition Texas-themed trucks. Others prefer a reliable old Ford or tricked-out lowrider-style pickups.

But one of the most recognizable trucks in all of Laredo belongs to Priscilla Villarreal, the border-news-reporting sensation and scourge of local authorities also known as La Gordiloca. Her ride? A rickety 1998 Dodge Ram held together, it seems, with not much else except for spit and glue.

The dashboard in her Dodge is crumbling. The seatbelts don’t work. And what about air conditioning, in a city where summer temperatures regularly hover around 100 Fahrenheit?

“Just roll down the windows,” said Ms. Villarreal, 34, as she guided me around Laredo last month for the profile I wrote for The New York Times. We spent the afternoon racing to the scene of a tractor-trailer accident, following up leads on graft scandals and stopping for a refreshment of nieve de garrafa, a delicious frozen treat.

Ms. Villarreal — whose nickname could be translated, she says, as Crazy Fat Lady — is one of Laredo’s most famous journalists. The news she broadcasts to her 120,000 followers on Facebook is salted with curses in equal parts English and Spanish, and it’s delivered by live stream from the pickup truck she affectionately calls the Blue Demon.

The vehicle, for which she paid the princely sum of $700, is more than just a means of transportation for Ms. Villarreal — it’s her calling card.

Upon seeing Ms. Villarreal’s truck, motorists in Laredo often roll down their own windows and shout greetings. Parking attendants scramble for the keys when Ms. Villarreal shows up for lunch at La Posada Hotel.

“I love La Gordiloca, and I love her truck,” said Ramón Santoyo, 31, an air-conditioning technician who walked up to Ms. Villarreal and took a selfie with her. “It shows she’s authentic and hard-working. You have to respect that.”

Throughout the day I spent with Ms. Villarreal in her Dodge, we roamed the parts of Laredo where, if news is happening, she’s most likely to find it.

She drove us through the gritty Las Cruces neighborhood where she was raised, past warehouses where people buy used clothing to sell in Mexico and down along the Rio Grande, near the site where a gunman had recently fired rounds at Border Patrol agents from across the border in Nuevo Laredo.

Ms. Villarreal arrived too late to that story to get shot at herself, but while there are no bullet holes in the Blue Demon, there’s very little else that hasn’t happened to it. The truck bears the marks of storms, potholes, high-speed rushes to crime scenes and abrupt parking jobs.

Simon is one of a team of New York Times journalists currently reporting from the border. Each week they’ll be sharing a slice of their reporting about the border and the people who spend time on both sides of it.

Do you have questions about life on the border? Or feedback about this newsletter? Email us at: crossingtheborder@nytimes.com. 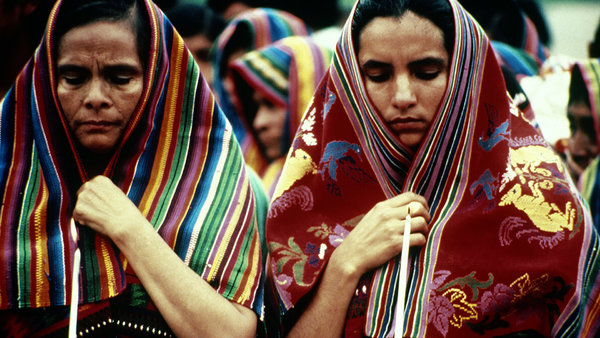 The border on screen: who gets it right?

Many — most — people around the world will never visit the border, will never know firsthand what it’s like. Instead, their experience is filtered through popular films and television shows — far more accessible than a plane ride to El Paso.

And so we spoke with Chris Vognar, a writer based in Texas, who recently wrote this piece for The Times about what happens when American filmmakers try to cross the border. He told us what filmmakers get wrong, and right, when telling stories from the border, and what works are worth your time.

The New York Times: If I had just one afternoon and wanted to spend it watching a movie or a television show to understand the border, what should I watch?

Chris Vognar: I don’t think any one movie or show can sum up the complexities of the border, but I still love “El Norte.” It manages to look at both the dream and the nightmare of border crossing.

[Read a 1984 New York Times article about the making of “El Norte,” in which the director recounts how armed men seized negatives from the crew.]

Now let’s flip that: What movie or TV show has gotten it so abjectly wrong that I should delete it from my queue?

I like “Narcos” O.K., but it’s a prime example of using the border for showcasing the carnage and destruction wrought by the drug war. Nothing wrong with that, but it’s pretty limited in thematic scope.

Your piece is mostly about American films. Is there a project from the southern side of the border you would recommend?

I really like the imagination of the Mexico-America coproduction “Sleep Dealer” (2009). It conjures dystopian images and ideas that also fit in with current debates and issues, including the link between immigration and labor.

[From 2009, watch an Anatomy of a Scene feature narrated by the “Sleep Dealer” director Alex Rivera.]

It was nearly nine months ago that the Trump administration, prompted by an intense backlash, officially rescinded its policy of separating migrant families at the United States-Mexico border.

Since then, according to the latest data, 245 children have been removed from their families, under circumstances that officials with Customs and Border Protection said were legal.

But government officials told the Times journalists Miriam Jordan and Caitlin Dickerson that some employees had raised concerns over separations that appeared to have little or no justification. And a failure to maintain accurate records suggests that more children could have been separated than the 245 currently known.

Read earlier installments of Crossing the Border here. Sign up here to have the next issue delivered to your inbox.

Could this be the start of a Bernie boom?