Home » Americas » ‘This Takes Away All Hope’: Rule Bars Most Applicants for Asylum in U.S.

MEXICO CITY — Thousands of people fleeing persecution, most from Central America, line up at the United States’ southern border every day hoping for asylum. They wait for months, their names slowly crawling up a hand-drawn list until they are allowed to present their case to American immigration authorities.

After the United States Supreme Court issued an order this week, almost none of them will be eligible for asylum.

The Supreme Court on Wednesday allowed the Trump administration to enforce new rules that bar asylum applications from anyone who has not already been denied asylum in one of the countries they traveled through on their way to the United States.

The rule is among the most stringent measures taken by this administration in its battle to halt migration, upending decades of asylum and humanitarian norms. It is likely to affect hundreds of thousands of migrants traveling through Mexico to reach the United States: Eritreans and Cameroonians fleeing political violence. Nicaraguans and Venezuelans fleeing repression.

And the largest group of all: Hondurans, Salvadorans and Guatemalans escaping the twin scourges of poverty and gangs.

“This takes away all hope,” said Eddie Leonardo Caliz, 34, who left San Pedro Sula in Honduras with his wife and two kids three months ago to try to escape gang violence, and spoke from a shelter in southern Mexico. With measures like this, he said, the Trump administration “is depriving us of the opportunity to be safe.”

The new rule, which has been allowed to take effect pending legal challenges, is consistent with the Trump administration’s posture of hostility and rejection for those seeking protection in the United States.

Whether by separating families of migrants, by drastically limiting the number of asylum applications accepted on a given day or by returning those entering the United States to Mexico to await their hearings, the administration has shown a dogged determination to discourage migration. 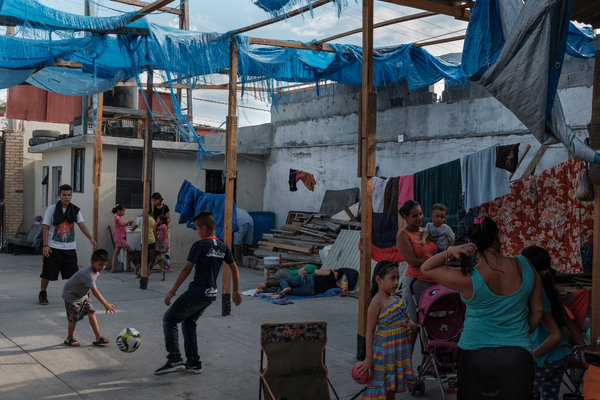 And it has put tremendous pressure on Mexico to help meet its goal, threatening months ago to escalate tariffs on all Mexican goods if the nation did not buffer the surge of migrants heading to the United States from Central America and elsewhere.

Mexico responded. This week, when Mexican and American officials met in Washington to discuss progress on the issue, the Mexican delegation took great pains to show how its crackdown along its border with Guatemala and throughout the country has reduced migration flows to the United States by more than 50 percent in the last three months.

Mexico’s actions, though applauded by Trump administration officials this week, have overwhelmed its troubled migration system. The number of individuals applying for asylum in Mexico has already skyrocketed in the last few years, as the United States has tightened its borders.

This rule could add to that burden, with many more applying for asylum in Mexico, despite the danger of remaining in Mexico. Violence there has soared to the highest levels in more than two decades. Stories of migrants kidnapped along the border abound, as criminal organizations await their return from the United States or pick them off as they attempt to cross the border.

Several migrants who are making their way north said in interviews on Thursday that the new rule would not deter them. For most, the hope of a new life in the United States outweighed whatever legal worries might lie ahead.

“I know things are getting more and more complicated in the U.S.,” said Noel Hernández, 21, who was staying at a migrant shelter in Guatemala after leaving his home in Tegucigalpa, in Honduras, a few days ago.

Others said they would try to make it in Mexico, despite the violence, or in Guatemala, a nation with a barely functional asylum system.

Oscar Daniel Rodríguez, 33, from San Salvador, has been in Guatemala with his wife and 3-year-old son for a month now, and says he will apply for asylum there.

He had applied for asylum in Mexico during a previous trek, and was rejected. If he is denied in Guatemala, he will try again in Mexico, he said. If they deny him again, he will try the United States.

“No matter how long it takes, and how long we have to wait, what we want is to give our son a better future,” he said.

Mexican asylum applicants, who don’t have to transit through another country to reach the United States, are not impacted by the new policy.

Like past efforts by the Trump administration to curb migration, Wednesday’s order could prove a burden for Mexico.

A senior Mexican official who spoke anonymously because the government has not addressed the issue publicly said that, for now, individuals who seek to apply will not fall under a previous provision, called Migrant Protection Protocol. That provision sends those applying for asylum in the United States back to Mexico to await their hearings.

Instead, migrants will either have to apply for another form of relief in the United States — with a higher bar for acceptance and fewer protections — or be deported back to their home countries.

Mexico is already playing host to tens of thousands of migrants awaiting their asylum hearings in the United States. Its migrant detention facilities can be overcrowded, unsafe and unsanitary.

Asylum applications there have soared in the last year, reaching about 50,000 through August, compared to fewer than 30,000 applications in the same period a year ago. This has placed a strain on Mexican society and on a system ill-equipped to handle such demand.

“We see detention centers crammed with migrants and children, riots, social problems arising, human rights abuses, and rising xenophobia among Mexicans,” said Jorge Chabat, a professor of international relations the University of Guadalajara. “The Mexican government has then little to no other choice but to design long-term migration policies to deal with the large number of migrants coming and staying now in Mexico.”

“There is not much else we can do,” he added, ruefully, “besides maybe lighting a candle for the Virgin of Guadalupe and praying for Trump not to be re-elected.”

The initial rule to block asylum sent shock waves among immigrant rights advocates when it was issued by the Trump administration in July of this year. It was almost immediately challenged in lawsuits.

The initiative was a unilateral move by the Trump administration after failed negotiations with Mexico and Guatemala to reach deals, called safe third country agreements, that would have required those countries to absorb asylum seekers who passed through them on their way to the United States.

Though Guatemala eventually caved to the administration’s pressure, and reached a safe third country agreement with the United States, Mexico remained firm in its refusal.

Now, with the Supreme Court allowing the asylum rule to go into effect, some feel the United States got what it wanted anyway — without the other countries’ consent.

“This is the latest step in terms of Trump’s policies to push Mexico to become a safe third country, and to make a big chunk of the migration flow stay in Mexico permanently and deter them from traveling north,” said Raúl Benítez, a professor of international relations at the National Autonomous University of Mexico.

The Mexican government, for its part, insists the move is not the same as a safe third country arrangement, which would require a bilateral agreement and would automatically send the majority of asylum seekers back to Mexico for good.

Neither Mexican officials nor independent experts believe it will lead to an immediate influx of returnees to Mexico. Instead, it could leave those who have been returned to Mexico while they await hearings more likely to stay because they will not be granted protection in the United States.

While the new rules will inhibit most migrants from applying for asylum, there are other forms of protected status that remain open to them, though the bar to entry is much higher.

Under current asylum law, individuals must show a credible fear, which is figured to be a 10 percent chance that they will face persecution if sent back home. The threshold for the two remaining protections now — so-called withholding status and qualification under the convention against torture — is reasonable fear. To qualify, the applicant must show a probability of being persecuted back home that is greater than 50 percent.

How Did Race Play on Election Day? ‘Near Civil War-Like’? Or ‘It Really Didn’t Matter’?