Thomas Sullivan, a prominent defense lawyer in Chicago who, during his brief time as a federal prosecutor, helped initiate an extensive undercover investigation of corruption within the county court system that led to the convictions of judges, lawyers and sheriffs, died on May 18 at his home in Wilmette, Ill., outside Chicago. He was 91.

Mr. Sullivan had established himself as a formidable lawyer when he was named United States attorney for the Northern District of Illinois in 1977. He had helped build the pro bono practice at Jenner & Block, the firm where he worked for his entire career, and had argued successfully in state court in 1971 that marijuana’s classification as a hard drug was unconstitutional, in the case of a man who had been sentenced to a mandatory 10 years in prison for possession of a small amount.

As federal prosecutor, Mr. Sullivan embarked on an audacious plan to root out bribery and case-fixing in the Cook County Circuit Court system. It included installing listening devices in judges’ chambers and creating fabricated cases that would be tried before judges who were under investigation, a risky undertaking. The sting came to be known as Operation Greylord.

“If we used real cases,” he said in an interview on his law firm’s website in 2014, and the prosecutor or judge “takes a bribe and a guy is released from a minor crime and then goes out and commits a really horrible crime, I’m going to get blamed for it. So you can’t use real cases; you have to use fake cases.”

As part of the sting, F.B.I. agents who were lawyers established legal practices to gain access to judges.

Mr. Sullivan did not stay for the entire three-and-a-half-year undercover operation; in 1981, he handed it off to Dan Webb, with tongue-in-cheek advice about the perils of prosecuting powerful judges.

“He said, ‘See that box on the left?’” Mr. Webb recalled Mr. Sullivan telling him on his first day in office. “‘That is an undercover project investigating the circuit court of Cook County. The box on the right is about an investigation of John Cardinal Cody, who’s under investigation for stealing from the church. Because your wife is Catholic, she will probably want a divorce — so you will not only be unemployed, you will be divorced.’”

In all, 92 officials were indicted, including 17 judges, 48 lawyers and 10 deputy sheriffs, and nearly all were convicted over the course of a decade, at trial or through guilty pleas. 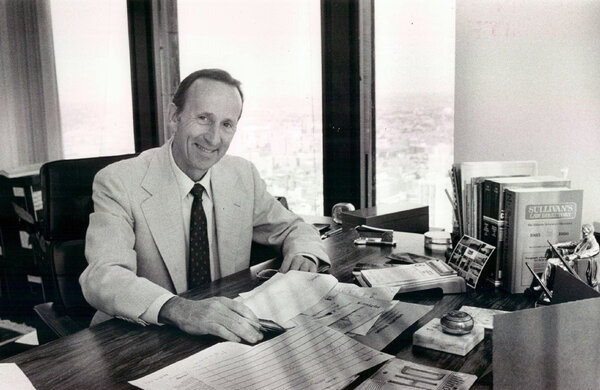 “Greylord would not have existed if not for Tom Sullivan,” Tony Valukas, who succeeded Mr. Webb as U.S. attorney in 1985 and later became the chairman of Jenner & Block, said by phone. “No one dared take on the judiciary then. But Tom did, and risked losing his license if he was wrong.”

Thomas Patrick Sullivan was born on March 23, 1930, in Evanston, Ill., and raised in Glen Ellyn, a western suburb of Chicago. His mother, Pauline (De Haye) Sullivan, was a homemaker. His father, Clarence, was a direct-mail marketing writer and postmaster of Glen Ellyn.

During Mr. Sullivan’s sophomore year at Loras College in Dubuque, Iowa, he took a constitutional law class that inspired him to study to be a lawyer. He soon left for the Loyola University Chicago School of Law, from which he graduated in 1952. He enlisted in the Army, serving two years stateside and in Korea as a clerk-typist.

Not long after his discharge, he was hired at Johnston Thompson Raymond & Mayer (which later became Jenner & Block). Early on, he worked with a colleague, Prentice Marshall, at building the firm’s commitment to pro bono criminal defense work. In 1956, they and a colleague, Jerold Solovy, handled numerous petitions from prisoners seeking to appeal their cases after the Supreme Court ruled that indigent criminal defendants were entitled to free trial transcripts.

“We were the indigent pro bono rat pack,” Mr. Solovy told Super Lawyers magazine for a profile of Mr. Sullivan in 2008. “Pro bono work is the proudest thing we did.”

Throughout his career, Mr. Sullivan mixed public interest work with high-profile defenses of clients like eight of the police officers who were acquitted of conspiracy to obstruct justice in the killing of the Black Panther leaders Fred Hampton and Mark Clark in a raid in 1969; a mobster, Samuel Carlisi; and a Chicago police officer accused of running a jewel theft ring.

“A person, no matter how awful he is, or how awful the crime he is accused of committing, is entitled to the full panoply of the law and the Constitution,” Mr. Sullivan told Super Lawyers.

Mr. Sullivan played a small role in what became known as the Chicago Seven trial in 1969, representing two lawyers cited for contempt and briefly jailed by Judge Julius Hoffman.

“He was very proud of that moment,” Gerald Lefcourt, one of the lawyers, said in an interview.

Mr. Sullivan was not flashy, but he was adept at cross-examination.

Mr. Valukas recalled Mr. Sullivan eviscerating a key witness in a bribery trial in 1974. “Over a day and a half,” Mr. Valukas said, “the witness would have agreed that he had started World War II. It was masterful. Low-key but frighteningly effective.”

Mr. Sullivan was part of his firm’s legal team that argued successfully in 1968 before the Supreme Court that their client’s death sentence should be lifted. The team established that the jury had been chosen unconstitutionally, because the prosecution had rejected potential jurors who had objections to capital punishment. As a result, their client, William Witherspoon, instead served life in prison, and the death sentences of many others were also lifted.

Mr. Sullivan also played a role in disbanding the House Internal Security Committee (originally the House Un-American Activities Committee). For eight years, he represented Jeremiah Stamler, a doctor and scientist who had refused to testify to the committee about Communist Party activities in the Chicago area. Mr. Sullivan and Albert Jenner, one of the name partners of the firm, along with the Center for Constitutional Rights, sued the committee, arguing that its mandate was unconstitutional.

In 1973 the committee withdrew its subpoena of Dr. Stamler, and the lawsuit was dropped. Two years later, the committee, which had been in existence since 1938, was disbanded.

“The case was the decisive factor in ending it,” Mr. Sullivan told The Chicago Tribune in 2019.

Almost three decades later, Mr. Sullivan was part of an effort by the State of Illinois to end the death penalty. In 2000, after Gov. George H. Ryan declared a moratorium on it, he created a commission on capital punishment, with Mr. Sullivan as one of its chairmen. The commission made 85 recommendations two years later to reform the death penalty system.

“The message from this report is clear,” Mr. Sullivan said. “Reform or repeal. Fix the capital punishment system or abolish it.”

Governor Ryan commuted the death sentences of about 160 inmates to life imprisonment without parole in early 2003, based in part on the commission’s findings. A later governor, Pat Quinn, signed legislation in 2009 that abolished the death penalty.

One of the commission’s recommendations, videotaping the questioning of all capital suspects in police custody, became a late-career mission for Mr. Sullivan. At the time, only Alaska and Minnesota required the practice. With lawyers and staff from Jenner & Block, he called hundreds of police departments nationwide over several years to find out which ones made the recordings voluntarily and how they benefited from them.

Mr. Sullivan believed that recordings would expose whether confessions were coerced and help the police fend off accusations that they used heavy-handed tactics during interrogations.

“Tom responded to any objection to implementing custodial recording based on cost (which was the most prevalent objection when we started the work) by offering to walk to the nearest Radio Shack so Tom could purchase a tape recorder for the department,” Andrew Vail, a partner at the firm, said in an email.

In addition to his wife, Mr. Sullivan is survived by his daughters, Maggie Sullivan Cescolini and Liza Sullivan; a son, Tim; a stepdaughter, Mimi Landau; six grandchildren; his sister, Nancy Comstock; and his brothers, John, Jim and David. A previous marriage ended in divorce.

Mr. Sullivan also engaged in efforts to free about a dozen detainees from Guantánamo Bay, including a Saudi police officer who had been doing human rights work in Afghanistan and was captured and labeled a terrorist. After several years, he was freed.

“Tom would almost spit when he thought about the injustices there,” said Pat Bronte, a civil rights lawyer who worked with him on the prisoners’ release. “We faced a lot of setbacks, and the younger lawyers among us would feel dejected, but Tom was always saying: ‘I don’t want to hear any talk about giving up. We have to find another way.’”