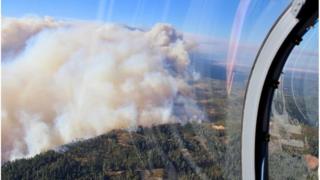 Thousands of residents are evacuating Northern California as an uncontained, fast-moving wildfire approaches several towns in the Sierra foothills.

The Camp Fire, which started early on Thursday near Camp Creek, has been fuelled by strong winds and dry forest.

Neighbourhoods, schools and hospitals have been evacuated while some residents in the town of Paradise were trapped by the flames, officials say.

So far there have been no reported deaths due to the blaze.

As of Thursday afternoon, local time, the Camp Fire has burned through 8,000 acres of forest and is 0% contained, according to California Fire officials.

As winds approached 50 mph (80 km/h), causing the fire to grow rapidly in just a few hours, some residents were forced to abandon vehicles and escape on foot, local media reported.

Evacuation orders are in place for the town of Paradise, home to around 26,000 people, as well as Magalia, Concow, Butte Creek Canyon and Butte Valley areas.

California Department of Forestry and Fire Protection Capt John Gaddie told the Associated Press that some residents in Paradise had been trapped by the fire. Emergency crews were working to help people evacuate there, he said.

At least one nursing home and hospital were evacuated and several homes were on fire, according to the Sacramento Bee, and the region is covered with thick, dark smoke.

Thousands are also without power in the region, which is just north of Sacramento.

One Paradise resident who fled the encroaching blaze told the Bee: “It was so hot. You could feel it.”

Others described watching flames consume their property as they evacuated.

An elementary school in the region was also forced to evacuate students after the fire came within half a mile of the campus, according to CNN.

The blaze is one of 14 currently active in California. Officials have put most of Northern California is under a Red Flag Warning, which means “extreme fire behaviour” can occur within 24 hours.

A smoke advisory has also been issued for the San Francisco area through Friday.

On social media, many have been sharing images of highways and roads flanked by fire or covered in heavy smoke and asking for help to evacuate friends and family.

#CampFire On Skyway in Paradise CA. Two spot fires on skyway as of 20 mins ago #CalFire pic.twitter.com/6HbjUBYbEP

Resident Shari Bernacett told the Associated Press she “knocked on doors, yelled and screamed” to get mobile home residents in her area to leave as fire consumed the hillside.

“The whole hill’s on fire,” she said while crying. “God help us!”

The region has grappled with serious wildfires – including the worst in the state’s history, the Mendocino and Thomas fires – on and off since 2017.

Life as a Nxivm ‘Slave’: Whippings, Branding and Cold Showers