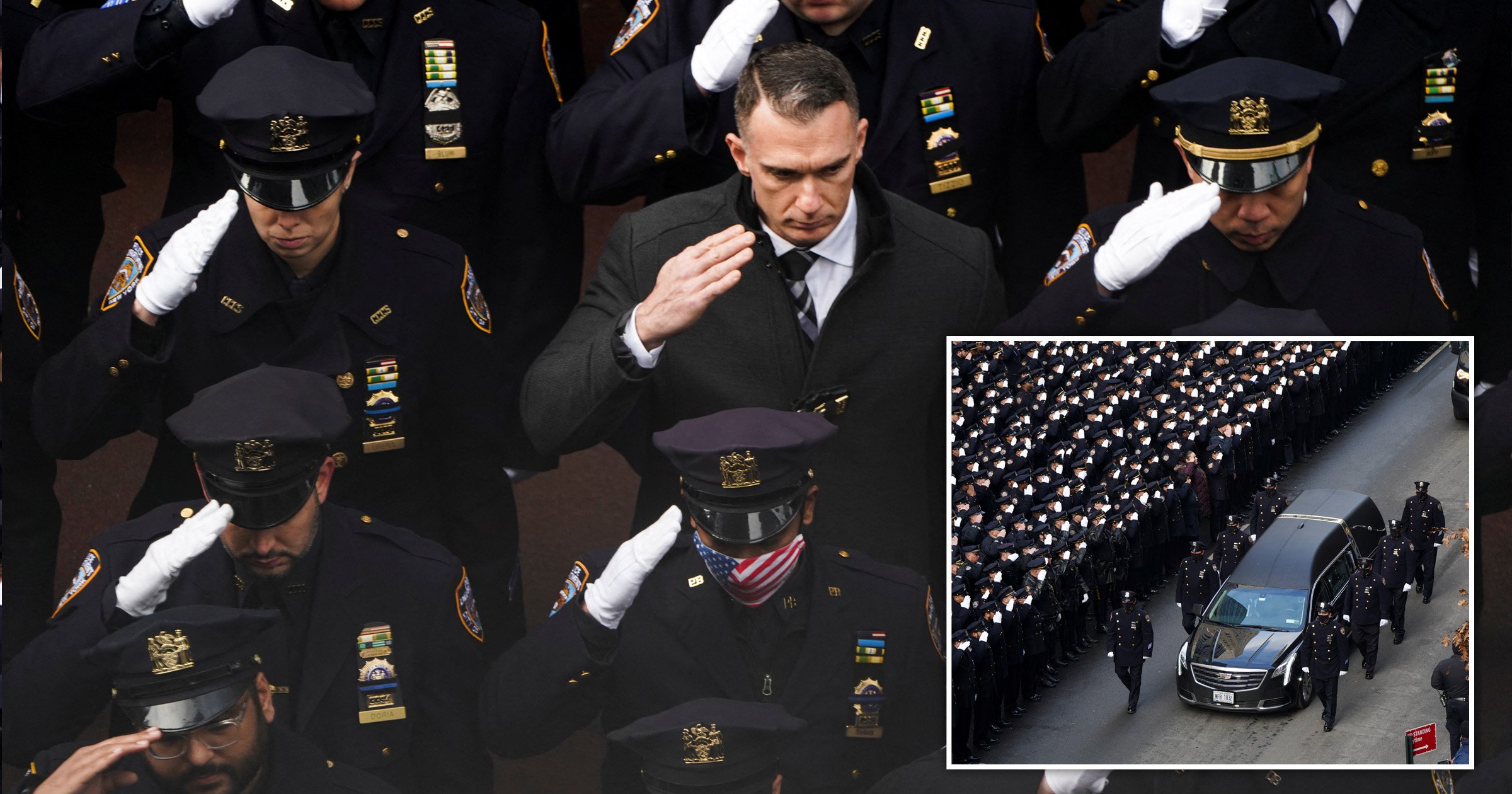 For the second time in a matter of days, thousands of New York City police officers convened in front of St Patrick’s Cathedral in Manhattan to pay tribute to an officer killed in the line of duty.

Wilbert Mora, an ambitious, young officer, was remembered by loved ones as someone who chose ‘a life of service.’ His funeral comes one day before President Joe Biden is set to visit the city to tackle the concerning rise in crime.

The 27-year-old died four days after he and his partner were shot while responding to a domestic disturbance in Harlem.

Both Mora and his rookie partner, Jason Rivera, 22, who died the day of the shooting, received posthumous promotions to Detective First Grade from NYPD Commissioner Keechant Sewell.

Sewell condemned the violent attack that drew throngs of people to Midtown Manhattan twice in a week to mourn while praising Mora’s character and impressive work ethic for an officer only four years on the job.

‘He was a true leader, an outstanding police recruit, an exceptional officer and the first generation of his family to join a profession that asks courageous men and women to leave their own families every day to protect and help someone else’s,’ Sewell said.

Mora, who is survived by his parents, three older siblings and girlfriend, had a life full of adventure ahead of him, his brother Wilson Mora said.

‘We had so many plans together. We were supposed to travel and go camping and go on road trips. I wanted to experience adventure with you because your love for life was infectious,’ Wilson told mourners.

Mora had been hit in the head with a bullet lodged in his brain. He was taken off life support at a Manhattan hospital four days after the shooting, and his heart liver, pancreas and both kidneys were donated before he died.

His sister, Karina Mora, criticized the law enforcement system during her eulogy, which she delivered in Spanish. In her emotional speech she demanded to know how many officers had to die in the streets of New York before the system changed.

She remembered him as someone who ‘lit up the house with his dreams,’ and described the pride she felt the day he graduated from the police academy. His death, she said, is ‘a nightmare that never ends.’

New York City Mayor Eric Adams, a former police Captain, gave somber remarks at the start of the service. He also praised Mora’s family for ‘sharing your son with the city.’

‘Officer Mora was not only a dedicated public servant but an exceptional young man, beloved by his family, the youngest of four children,’ Adams said. ‘We reflect on his bravery. Remember his sacrifice.’

Adams and others present at his service praised Mora for being an organ donor, lauding him for having saved the lives of five others after his death.

Come Thursday, Adams will be joined with a slew of city and state officials to meet with President Biden, who is expected to highlight his efforts against gun crime and police violence.

At a time the city is experiencing peak violence, with the death of Mora and Rivera fresh on every resident’s mind, officials are hoping to accomplish several things while meeting with Biden.

While Biden hopes to curb gun violence, many progressive advocates are hoping he will take action on a range of police reforms. White House Press Secretary Jen Psaki did not rule out the possibility of reform during a Tuesday briefing, where she said they had not finalized a police reform executive order.

‘We have not even finalized, nor do I have a preview of exactly when it would be, a police reform executive order,’ Psaki said.

N.J. Approves $14 Billion in Corporate Tax Breaks in Less Than a Week