One recent Saturday afternoon, Teresa Ting passed out purple medical masks — the same color as the 7 train that connects Flushing, Queens, to Manhattan — among a group of 14 volunteers gathered on the steps of the massive Flushing post office on Main Street. A spreadsheet on Ms. Ting’s phone detailed the day’s watch routes in the neighborhood. One team would monitor Main Street, another would take Prince Street and 37th Avenue.

A third group would patrol the blocks between Union Street and College Point Boulevard on Roosevelt Avenue, where a man violently shoved an Asian-American woman to the ground outside a bakery in February.

The attack galvanized Ms. Ting to form Main Street Patrol, a volunteer safety group that casts a watchful eye over downtown Flushing, equipped with little more than safe intervention strategies and a walkie-talkie app on their phones.

Ms. Ting, an actress and Queens native, works with a rotating cast of volunteers from different parts of the city and walks of life, all driven by outrage at unprovoked assaults against Asian-Americans and inaction by bystanders.

“This past year has taken a toll,” Ms. Ting said. “Something needed to be done.” As it happens, that Saturday was Ms. Ting’s 30th birthday — her second celebration in a pandemic but her first in her new role safeguarding the community. 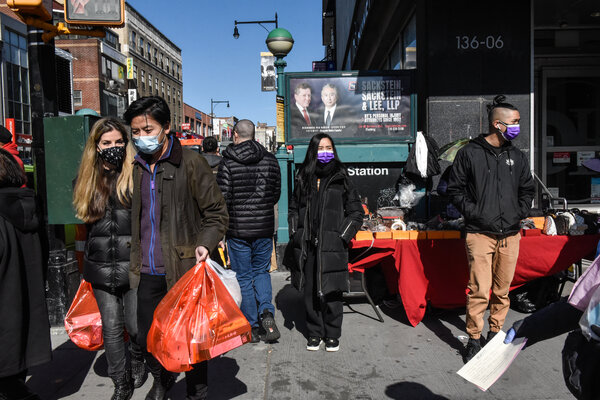 Asian-Americans are grappling with fear, rage and anxiety brought on by attacks against people of Asian descent, particularly older men and women. In an especially egregious episode a little more than a week ago, a 65-year-old Filipino woman was brutally assaulted in broad daylight outside a luxury apartment building in Midtown Manhattan. Two lobby staff members who witnessed the assault but failed to intervene have been fired.

After each case, Asian-Americans express shock and pain but point to a long history of bigotry that has been magnified during the pandemic. Advocates also attribute the current climate to former President Donald J. Trump and his use of damning and inaccurate phrases like “the China virus.”

The New York Police Department has received 35 reports of anti-Asian hate crimes already this year, compared with 28 in all of 2020 and only three in 2019. Officials say the data fails to paint a full picture, as many incidents go unreported or are not categorized as hate crimes.

As the attacks mount, Asian-Americans and their allies are hoping to make their streets safer.

In addition to Main Street Patrol, whose volunteers take weekend shifts in downtown Flushing, at least three other similar groups have formed during the pandemic. A series of assaults against women in East Williamsburg, Brooklyn, in January led to SafeWalks NYC, which offers escorts at train stations in various neighborhoods, including Manhattan’s Chinatown.

And in February last year, Karlin Chan, a community activist, formed the Chinatown Block Watch, whose participants keep watch over an area that is the birthplace of Chinese culture in New York City. Mr. Chan, who is in his mid-60s, is aware of the risks he faces as he roves the neighborhood.

“With my beautiful crop of gray hair, there is a target on my back,” he said. But the urgency of the moment attracted Mr. Chan, who experienced racism as a child growing up in Chinatown in the early 1960s. He leads volunteers along Mott Street and Grand Street, as well as the blocks under the Manhattan Bridge, to check in with the neighborhood’s residents and business owners.

Civilian patrols have a long and mixed history in New York City. Most notable is the Guardian Angels, founded in the late 1970s, when economic blight helped fuel a wave of violent crime across the city. Known for their red berets and bullish presence, the Guardian Angels emerged as a crime-fighting patrol on the subways, acquiring a kind of hero status while simultaneously drawing the ire of politicians and transit officials for their vigilante justice.

After a prolonged period of low crime in New York City, the Guardian Angels have re-emerged with the sharp increase that has coincided with the pandemic, and they have spent time on the ground in Chinatown this past year. The group’s founder, Curtis Sliwa, announced in March that he was running as a Republican in the city’s 2021 mayoral race.

But Main Street is quick to stress that it focuses on intervention rather than deterrence. “We want to remain a little more covert, so we blend in more and we can actually run into catching more situations rather than suppressing them,” Ms. Ting said.

The one incident the group has run into got hairy after a patroller started recording two young men who were overheard making racist remarks and threatening to harm an older man. The men became agitated and knocked the patroller’s phone out of his hand, eventually fleeing. The group later revised some of its protocols, stressing that volunteers should record episodes only if they can do so from a safe distance.

A Rise in Anti-Asian Attacks

A torrent of hate and violence against people of Asian descent around the United States began last spring, in the early days of the coronavirus pandemic.