The announcement comes as the partial shutdown hits the 20th day with no resolution in sight. 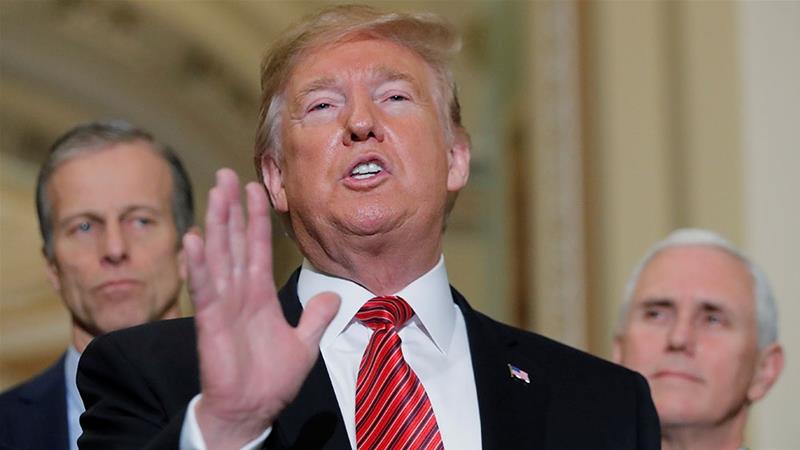 US President Donald Trump on Thursday cancelled his planned trip later this month to attend the World Economic Forum in Davos, Switzerland, amid the ongoing partial shutdown of the United States government.

The announcement came through a tweet in which Trump blamed Democrats for the shutdown, which began on December 22 after he, his fellow Republicans and Democrats failed to come to an agreement on whether to allocate more than $5bn in funding the president has been demanding for a wall on the US-Mexico border.

Democrats, who blame Trump for the shutdown, oppose the wall, calling it ineffective, immoral and expensive. They have instead agreed to allocate more than $1.3bn in funding for broader border security measures that do not include a wall.

Before a trip to the border in Texas, Trump on Thursday renewed his threat to declare a national emergency to circumvent Congress if a deal cannot be reached. If he acts on the threat, it is likely to be challenged legally.

Earlier in the day, Trump said he wanted to go to the annual Davos event, which is scheduled from January 22 to 25, but would skip the meeting if the shutdown persisted. He then made the announcement he was cancelling his trip to Switzerland.

Treasury Secretary Steven Mnuchin and other Cabinet members are still scheduled to attend the economic forum, which attracts business and political elite.

Chinese Vice President Wang Qishan is also expected to attend, but it is not clear if there are any arrangements for a meeting between him and US officials during the annual gathering. China and the US have taken a 90-day pause in implementing tariffs to hammer out a trade deal.

The Swiss meeting could also provide US officials with opportunities to discuss better terms of trade with the European Union, Japan, Canada and Mexico.

The US partial government shutdown is affecting some 800,000 federal workers who have been furloughed or required to work without pay.