Donald Trump thought releasing a summary of his call with Ukraine’s President Volodymyr Zelenskiy would clear him of any wrongdoing and prove once and for all that it was an innocent conversation.

But it only added fuel to the fire for Democrats, weaving another web of questions and digging a bed of doubt, giving oxygen to their cause and further enraging Republicans.

Now the release of the whistleblower’s report continued to build on that polarising dynamic – adding to the alarm felt by some and the irritation held by others.

Democrats say what the intelligence community whistleblower alleges is even worse than they first thought – an utterly damning document.

For many Republicans, in the absence of an explicit quid pro quo, it is much ado about nothing – just another partisan attempt to usurp the president after the Russia investigation failed to.

In their eyes, this is second-hand information promoted by desperation and hysteria.

Given the declassified complaint was made by someone who wasn’t in the room, we can expect plenty of focus around their credibility and possible political motivations.

Soon, we are told, we will also get a chance to hear their testimony, too. 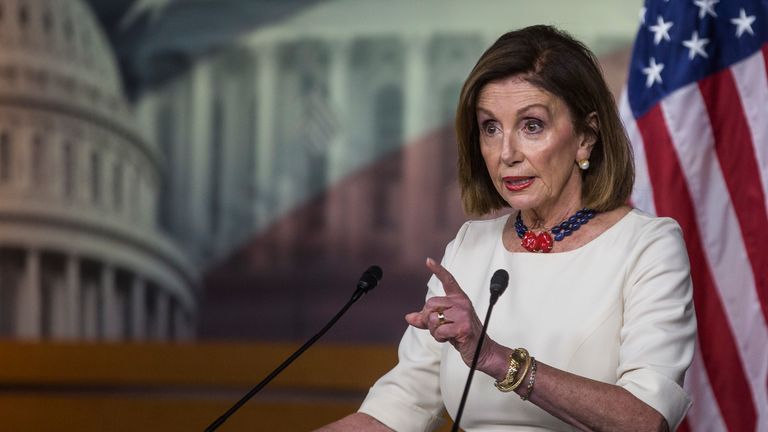 On paper, the allegations made are very significant.

Firstly, the whistleblower claims Donald Trump tried to use leverage to interfere with the 2020 election by asking Ukraine to investigate his political opponent Joe Biden.

Secondly – and perhaps even more damaging – is the allegation that White House officials tried to cover-up the call by putting it on a highly classified, sensitive system and trying to stop its release.

If true, those claims have the ability to take down the president.

But let’s not get ahead of ourselves. They are only allegations and there have been many levied at this president.

Many of the questions put to the acting director of national intelligence on Thursday focused on process.

He was adamant Donald Trump did not direct him to withhold any information.

Voters may read the nine-page document and make their minds up about immediately.

That won’t stop Congress spending months asking more though, like who were the six officials who allegedly tried to lock down the call?

What role did the attorney general William Barr play? What did Ukraine understand was expected of them before they had the call with the president of the United States?

Some appear to be convinced he tried to get Ukrainian prosecutor Viktor Shokin sacked to help his son.

They and Mr Trump are of course free to criticise Hunter Biden for taking a position with a Ukrainian company at the same time as his father was directly involved in Ukrainian issues.

And they have the right to criticise Joe Biden for declining to recuse himself from a matter that could be seen to affect his son’s interests.

However, Ukraine’s prosecutor general said in a recent interview that there was no evidence of wrongdoing found by Biden or his son.

Get ready for a very bitter battle.

There is talk of articles of impeachment being filed by as early as next month.

Democrats have taken a big political risk with this process.

Mr Trump may have acted inappropriately. But it’s on them to prove it was something far worse. Lose and they will likely lose the 2020 election, too.

California Today: After Poway Shooting, Another Discussion on Gun Control