Home » Americas » Trump: 'Iran failing as a nation' after US sanctions

US President Donald Trump said he believes Iran wants to engage in negotiations and he is ready for talks. 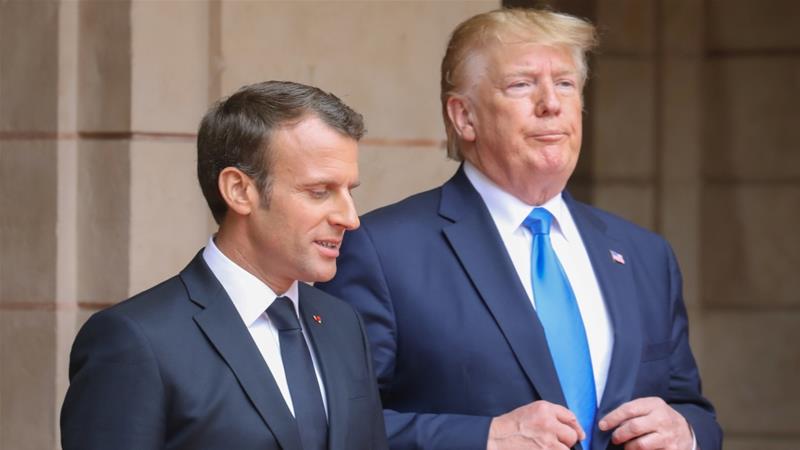 Iran is failing as a nation after Washington imposed powerful sanctions last year, US President Donald Trump said on Thursday, adding that things could change rapidly in talks with the leadership in Tehran.

“When I became president, Iran was a true state of terror. They still are and were undisputed champions of terror,” Trump told reporters before holding bilateral talks with French President Emmanuel Macron in Caen, western France.

“They are failing as a nation, but I don’t want them to fail as a nation. We can turn that around very quickly but the sanctions have been extraordinary [in] how powerful they have been.”

Macron and Trump both stressed they do not want Iran to obtain nuclear weapons. Macron said the sides also want to reduce Iran’s ballistic missile programme, “contain” Tehran’s regional activity in the Middle East and achieve peace in the region.

“I think we do share the same objectives on Iran. We had an accord until 2025 and we want to go further and have full certainty in the long run,” Macron said.

The two leaders tried to sidestep their feud over the 2015 nuclear deal between Iran and world powers which the US exited unilaterally last year, despite efforts in Europe to salvage the agreement.

Trump has condemned the deal, signed by his predecessor Barack Obama, as flawed for not being permanent and for not covering Iran’s ballistic missile programme or its role in conflicts around the Middle East. He has called on Iran to come to the negotiating table to reach a new deal.

“I understand they want to talk and that’s fine, we’ll talk,” Trump said of Iran. “One thing they can’t have is nuclear weapons.”

Earlier this week, Iran’s Supreme Leader Ayatollah Ali Khamenei said that Tehran will continue “resisting” US economic and political pressure and not be “deceived” by Trump’s offer of negotiations.

“Standing and resisting the enemy’s excessive demands and bullying is the only way to stop him,” he said, without mentioning the United States by name.

Tensions between Iran and the US have soared in the past month, as the US sent an aircraft carrier and B-52 bombers to the region over an unexplained “threat” from Iran.

The US has also blamed Iran, without providing evidence, for “attacks” that damaged four oil tankers off the coast of the United Arab Emirates last month.

Separately on Thursday, a Japanese government spokesperson said Prime Minister Shinzo Abe will visit Iran “soon” in an effort to reduce tensions between Washington and Tehran.

It will be the first by a Japanese leader to Iran in 41 years, Chief Cabinet Secretary Yoshihide Suga said.

He declined to specify the dates of the trip or other details, but said it would be “soon.” Officials are finalising the details so the visit will be meaningful, Suga said.

German Foreign Minister Heiko Maas is travelling to Iran next week to discuss the nuclear deal and Tehran’s role in the region, his office announced on Thursday.

“We want to preserve this nuclear agreement because we believe it is a good agreement that prevents Iran from acquiring nuclear weapons,” foreign ministry spokeswoman Maria Adebahr said.