Cohen in court to ask judge to limit the ability of federal prosecutors to review the documents seized from him. 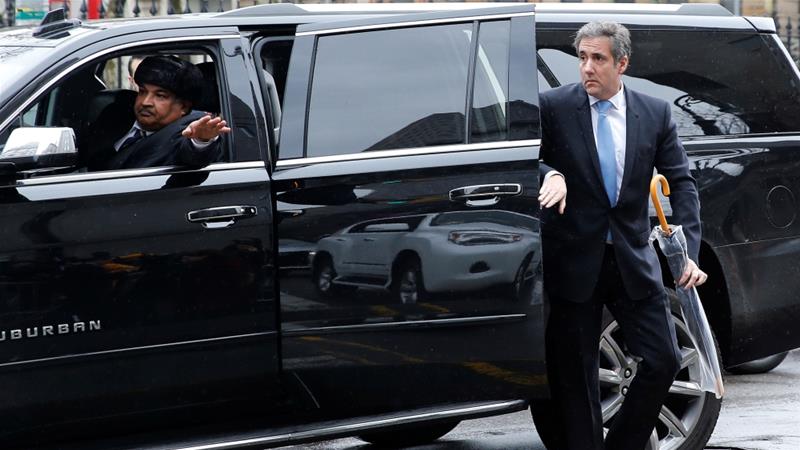 US President Donald Trump’s longtime personal lawyer has arrived at a Manhattan court for a hearing over documents seized as part of a federal investigation that could cast a harsh light on Trump’s business and personal relationships.

Adult-film star Stormy Daniels, who is entangled in a legal fight with Michael Cohen, the president’s lawyer, arrived later on Monday to attend the hearing.

Cohen paid Daniels $130,000 in 2016 as part of an agreement for her to keep quiet about a sexual encounter she says she had with Trump a decade prior.

“I think Michael Cohen is in a lot of trouble,” Daniels’ lawyer, Michael Avenatti, told reporters outside the court. Avenatti and Daniels, whose real name is Stephanie Clifford, are not parties in the court case.

Cohen was in court to ask a judge to limit the ability of federal prosecutors to review the documents seized from him last week.

He asked the court to give his lawyers first look at the seized materials so they could identify documents that were protected by attorney-client privilege. 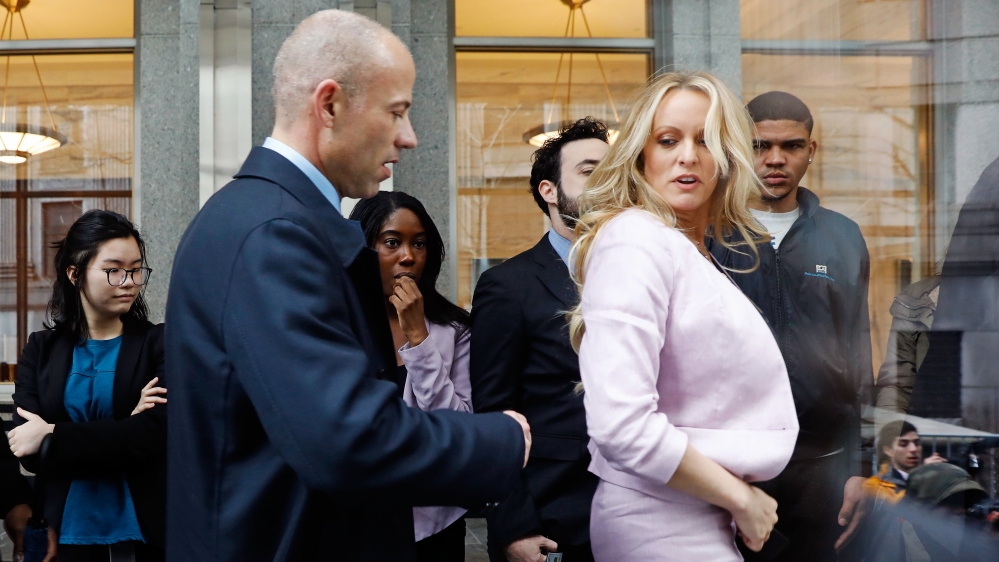 Failing that, they wanted the court to appoint an independent official known as a special master, a role typically filled by a lawyer, to go through the documents and electronic data seized under a warrant and decide what prosecutors can see.

Prosecutors have asked that the seized documents be reviewed to identify those covered by attorney-client privilege by a “filter team” of lawyers within their office, who would be walled off from the main prosecution team.

A lawyer for Trump, Joanna Hendon, asked in a filing on Sunday to be allowed to review documents that in any way relate to the president, which she described as being seized amid a “highly politicised, even fevered, atmosphere”.

Lawyers for Cohen appeared without their client at a hearing Friday before US District Judge Kimba Wood in Manhattan federal court.

The judge ordered that Cohen himself be present on Monday so that he could answer questions about his clients.

Cohen’s lawyers say that Cohen should not be required to turn over the names.

They disclosed in a court filing on Monday that Cohen had at least 10 clients in 2017 and 2018, and that he did “traditional legal tasks” for three of them, including Trump, Republican fundraiser Elliott Broidy and a third who asked not to be named.

Cohen arranged a $1.6m payment to secure the silence of a former Playboy model who said she became pregnant by Broidy, a person familiar with the matter said Friday.

Later on Monday, the judge ordered Cohen’s lawyers to disclose name of his third legal client. He was revealed to be Fox News commentator Sean Hannity.

Last week’s raids came after a “months-long” investigation of possible crimes related largely to Cohen’s business dealings, rather than his work as a lawyer, prosecutors have said.

A person familiar with the raids said last week that the information FBI agents were seeking included information about payments to Daniels.

The raids were based partly on a referral by the office of Special Counsel Robert Mueller, who is investigating possible collusion between Trump’s 2016 presidential campaign and Russia, according to court filings.

Trump has called Mueller’s probe a “witch-hunt” and denied any collusion.

Todd Harrison, a lawyer for Cohen, said at Friday’s hearing there were thousands of documents seized that were likely privileged, and that many related to clients other than Trump.

Fire breaks out on board HMCS Toronto in Halifax