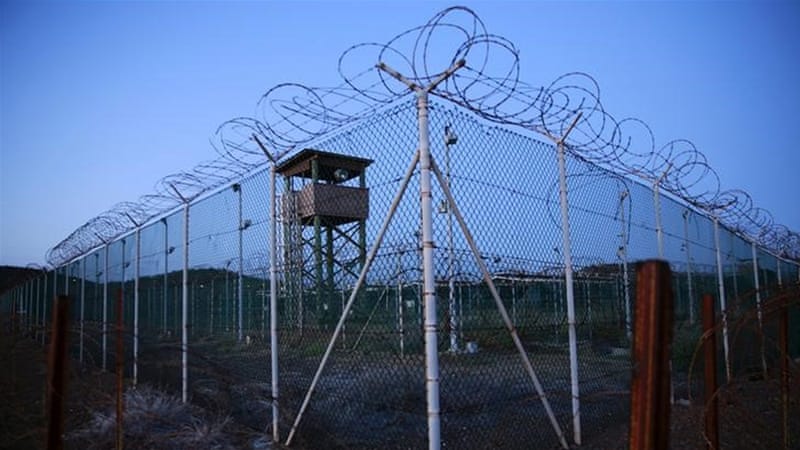 Donald Trump confirmed this week that he would keep the Guantanamo Bay detention facility open, a move experts say is unsurprising yet will likely mean that several dozen remaining detainees will not be able to leave the infamous prison.

Trump signed an executive order on Tuesday stating that detention at the US-run prison camp in Cuba would continue.

“Donald Trump’s a moron if he thinks Guantanamo should remain open because it keeps us more safe or improves our standing in the world,” said Wells Dixon, a staff lawyer at the Center for Constitutional Justice, a US-based legal advocacy group. “It does exactly the opposite.”

The decision is a break from the positions of Trump’s predecessors, Barack Obama and George W Bush, who both said they believed the facility should be shuttered. Neither former president closed Guantanamo, however.

While Trump’s move “isn’t surprising”, Dixon told Al Jazeera “it sadly confirms his willingness to pander to his political base at the expense of US national security and international human rights”.

It is “sheer stupidity”, he added.

The executive order signed this week describes US detention practices on Guantanamo Bay as “legal, safe, humane, and conducted consistent with United States and international law”.

Additionally, it says that US Secretary of Defence Jim Mattis is expected to make policy recommendations to the president within 90 days, including as it pertains to the “transfer of individuals” to Guantanamo.

Trump also said during his state of the union address that he plans to ask the US Congress “to ensure that, in the fight against ISIS [the Islamic State of Iraq and the Levant, also known as ISIL] and al-Qaeda, we continue to have all necessary power to detain terrorists – wherever we chase them down”.

At least 780 men have been held at Guantanamo since the prison opened in 2002, rights group Reprieve reports.

Forty-one men are still held there, 28 of whom have never been charged with a crime.

At least five detainees have been approved for transfer out of the prison, but remain at the facility, advocacy group Close Guantanamo says.

Dixon said the Trump administration’s decision effectively means “that nobody will leave Guantanamo regardless of the facts and circumstances of their individual cases”.

“That is clearly the implication of the executive order … including whether or not they’ve long been approved for transfer,” he told Al Jazeera.

Human rights groups have documented the systemic and routine mistreatment of Guantanamo prisoners for years, many of whom have been imprisoned without charge or trial.

Detainees have reported being denied access to food, water and medicine, deprived of sunlight and sleep, prevented from exercising their religion and tortured during long periods of interrogation.

“Make no mistake about it; Guantanamo has everything to do with discrimination against Muslims … That’s why it was created, that’s why it still exists, and I think we shouldn’t forget that,” Dixon added.

Expanding the ‘War on Terror‘

Despite serving as president when the prison was first created – in the aftermath of 9/11 and as part of his administration’s “War on Terror” strategy – George W Bush eventually made an about-face, stating that he intended to close Guantanamo.

But the former president never followed through.

In late 2008, as he prepared to leave the White House, senior officials within the Bush administration told the New York Times that he never reviewed proposals from the US State Department and the Pentagon outlining options for the transfer of Guantanamo detainees.

Obama also pledged to close Guantanamo. However despite issuing an executive order to close the prison only two days after he was inaugurated for a first term, in January 2009, Obama had failed to fulfill his promise when he left office in 2016.

Karen Greenberg, director of the Center on National Security at Fordham University’s School of Law, told Al Jazeera the “idea of institutionalising Guantanamo is wrong now, it was wrong in the past [and] it’s always going to be wrong”.

In this light, the Trump administration’s decision is “unfortunate and unnecessary”.

“The best you could say about it, would be that it was only meant symbolically to sort of rebuke or poke at yet another thing that President Obama did,” Greenberg said, referring to Obama’s promise to shutter the facility.

But she said “it means a lot more than that”: the move effectively takes away any doubt that the US has no intention to close Guantanamo and it is “as if to say, ‘It’s too difficult, period'”.

Trump’s executive order also states the US “may transport additional detainees” to Guantanamo “when lawful and necessary to protect the Nation”, a clause Greenberg said “is a dangerous part [of the order] because the ‘War on Terror‘ seems to be an ever-expanding issue”.

The Center for Constitutional Justice, Reprieve and other lawyers filed a petition on January 11 challenging the continued detention of the prisoners at Guantanamo on the basis it is unconstitutional.

“The US has had 16 years to build a case against these men, and yet 28 of 41 prisoners are held without charge or a trial of any kind – a shocking violation of America’s founding principles,” Shelby Sullivan-Bennis, a Reprieve lawyer representing several Guantanamo inmates, said in a statement at the time.

According to Dixon, while Trump’s executive order may be “politically expedient”, it does not change the fact that the release of Guantanamo detainees will be largely left up to the courts to decide.

“The more the president demonstrates through his actions and through his statements that he has no intention of transferring anyone or closing Guantanamo, the more likely it is that a court will order him to do that.”

Red Deer RCMP find woman thought to be ‘in danger,’ no longer need tips from public