US president says he’s finalising plan that would deny asylum to those who enter US between official ports of entry. 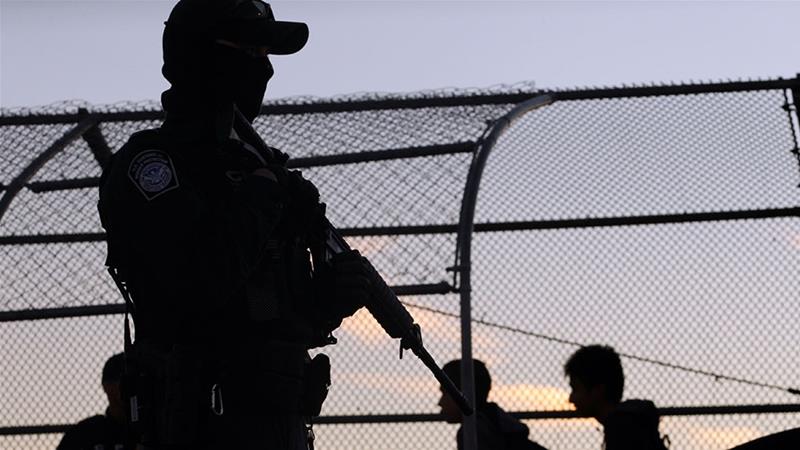 Less than a week before the midterm elections, US President Donald Trump said his administration is finalising a plan that would deny asylum to individuals who cross the US border between official ports of entry.

Speaking at the White House on Thursday, Trump said the plan is “totally legal”. Legal experts say, however, it is expected to be challenged in court once announced.

Under US immigration law, any immigrant in the US can apply for asylum regardless of how he or she entered the country.

Trump said he would be signing an executive order sometime next week regarding immigration. He did not detail the proposal or how it would be implemented.

The announcement comes as Trump seeks to stoke fear over a caravan of Central American migrants and refugees making its way to the US-Mexico border. The caravan is still more than 1,100km away and is not expected to make it to the US border for weeks.

Those travelling with the caravan have told Al Jazeera they are fleeing violence, including political persecution, poverty, and poor healthcare. Many have said they plan to apply for asylum at an official port of entry, as other caravans have done in the past.

One Honduran woman, who witnessed her husband’s murder three years ago, said she joined the caravan to seek opportunities to send money back home to help provide for her son’s expensive medical care.

Trump also said the US is building “massive” tent cities to house asylum seekers, including children, while their claims are processed. In the past this could take years.

According to the 1997 Flores settlement, children can only be held in immigration detention for up to 20 days, after which they must either be released to a guardian or placed in a licensed shelter. Trump was forced to end his administration’s practice of separating families at the border earlier this year after public outcry.

On Wednesday, Trump said he could send more than 15,000 US military troops to the border. Some 5,200 troops are already making their way down to the border to provide logistical and other support to US border agents.

When asked on Thursday if troops would use force on migrants and refugees, Trump said if individuals are throwing rocks, they would be treated as if they have firearms.

Trump referenced clashes between armed police and caravan participants at Mexico’s border with Guatemala. One Honduran man was killed and more than 100 others were injured on Sunday.

Trump has been hitting the campaign trail hard this week as he attempts to energise his Republican base ahead of the midterm elections. Democrats are vying to take control of Congress on November 6 in an election viewed as a referendum on the president’s first two years in office.

Trump was slammed late on Wednesday after he tweeted an anti-immigrant online campaign video blaming Democrats and suggesting, without evidence, that the caravan includes murderers.

During his presidency, he has sought to fulfill a number of anti-immigrant campaign promises, including a wall between the US and Mexico and crackdown on immigration.

Earlier this year, Attorney General Jeff Sessions said that “generally” domestic violence and gang violence would not longer be grounds for asylum.

Fauci criticises US partisan gap for holding back Covid-19 vaccinations