Home » Americas » Trump, Venezuela and the Tug-of-War Over a Strongman

How a yearslong battle over U.S.-Venezuela relations aided President Trump’s campaign in Florida — and left the Maduro regime standing. 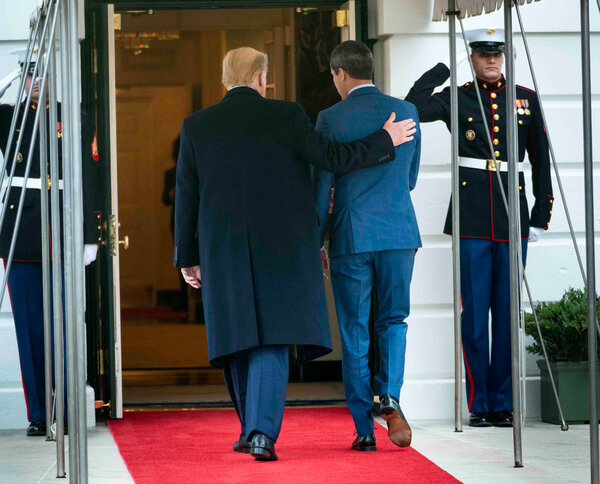 When President Trump turned to the Capitol gallery during his State of the Union speech in February to recognize Venezuela’s young opposition leader, Juan Guaidó, it seemed like a political masterstroke.

Mr. Guaidó’s surprise appearance — the culmination of efforts by foreign policy hawks to shift U.S. strategy in Latin America and dislodge Venezuela’s strongman president, Nicolás Maduro — prompted a standing ovation from Republicans and Democrats alike. “Maduro’s grip on tyranny will be smashed and broken,” Mr. Trump proclaimed. In the 2020 battleground of South Florida, home to hundreds of thousands of Venezuelan expatriates and Cuban-Americans who support their cause, Mr. Trump’s embrace of Mr. Guaidó drew a rapturous response.

Mr. Maduro’s survival is, in part, a parable of foreign policy in Mr. Trump’s Washington — where ideologues, donors and lobbyists compete to seize the attention of an inexperienced and highly transactional president, warping and reshaping American diplomacy along the way.

They included a billionaire donor from Florida; top lobbyists who have earned millions in the influence-business boom of Mr. Trump’s first term; and a Venezuelan oligarch, now under federal indictment, who worked to broker U.S. investments in his country.

At stake was not only the welfare of Venezuelans, but also the flow of billions of dollars in their country’s crude oil — and, Mr. Trump came to believe, his re-election prospects.

As Mr. Maduro endures, a key architect of Mr. Trump’s Venezuela policy left his White House post in September. The same month, another official met secretly in Mexico with a Maduro ally in a last-ditch effort to persuade Mr. Maduro to step down — which Mr. Trump could have touted as a triumph before November.

A White House spokesman, John Ullyot, said Mr. Trump’s leadership had led to broad international pressure on Mr. Maduro. “The president continues to support the Venezuelan people to ensure a future that is democratic and prosperous,” he said.

But some former officials who favored a tougher stance on Venezuela now question the administration’s approach.

“There is a very strong consideration for the donors, for the swing voters in Florida and for those that are just ideologically pure on the evilness of Cuba,” said Fernando Cutz, who worked on the National Security Council for Mr. Trump and his predecessor. “The nuance is gone — the diplomacy.”

In spring 2017, Brian Ballard, a lobbyist and top Trump fund-raiser from Florida, hosted a meeting with two people who would play a role in the struggle over Venezuela’s future.

One was Raúl Gorrín, who had amassed a fortune under Venezuela’s socialist government while building close ties to both Mr. Maduro and the opposition. He was among a wave of foreign interests reaching out to Mr. Ballard, who had recently opened a Washington office to meet the demand for lobbyists close to the new administration.

The other guest was Mauricio Claver-Carone, a longtime lobbyist on Cuba policy and a ferocious defender of the embargo. He had landed at the Treasury Department after working on the Trump campaign but had ambitions for a foreign policy role. Mr. Claver-Carone declined to comment.

As the two men talked alone, their conversation grew testy, according to Mr. Gorrín, 51. Mr. Claver-Carone insisted that the regime was close to collapse; Mr. Gorrín argued that Mr. Maduro was firmly in control and that the United States and Venezuela would benefit from a thaw.