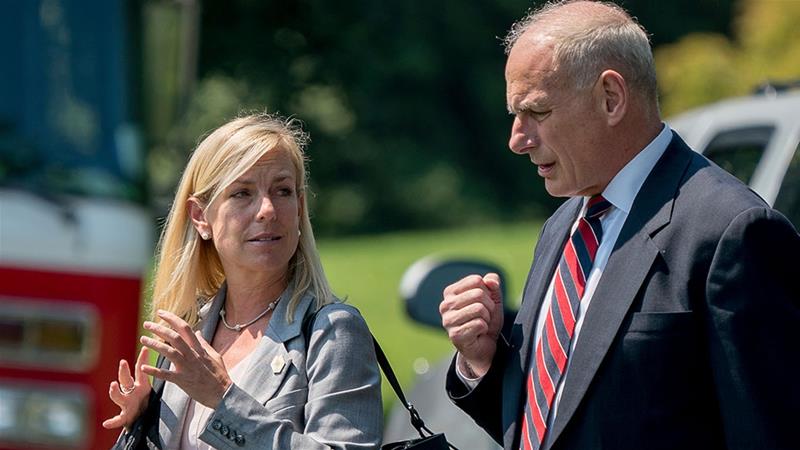 US President Donald Trump is expected to remove Department of Homeland Security chief Kirstjen Nielsen and is considering replacing chief of staff John Kelly in another shakeup of his administration, US media and agencies reported, citing unnamed sources.

Trump has been mulling removing Nielsen, a Kelly protege who became the secretary at Homeland Security when he left the job to become Trump’s chief of staff, for a number of weeks, a source told Reuters news agency.

The source cautioned Trump could still change his mind on the matter, but said he has grown weary of her in his push to harden the US border with Mexico.

Trump has not decided on a candidate to replace Nielsen, the Wall Street Journal reported.

“The secretary is honoured to lead the men and women of DHS and is committed to implementing the President’s security-focused agenda to protect Americans from all threats and will continue to do so,” said Tyler Houlton, a Department of Homeland Security spokesman, in response to an ABC News report about the possible staff changes.

Trump is also considering replacing Kelly, an ardent defender of Nielsen, with Vice President Mike Pence’s chief of staff, Nick Ayers, the Reuters source said. CNN reported that Ayers, along with other top aides, including adviser Johnny DeStefano and budget director Mick Mulvaney, and those outside the White House are being discussed.

Kelly, a retired Marine Corps general, has sought to bring more stability to the White House operation under the unpredictable Trump.

During his time as chief of staff, he and the president have had a rocky relationship, according to various news reports and Bob Woodward’s best-selling book Fear: Trump in the White House.

In the book, Kelly is said to have described Trump as an “idiot”,  a comment that Kelly denied making.

Kelly has said at least twice that he and the president “have an incredibly candid and strong relationship”.

If they leave, Kelly and Nielsen would join a long list of people who have been fired by Trump or resigned since he took office in January, 2017.

Many analysts predicted a shakeup of Trump’s cabinet and inner circle after the US midterm elections.

On Wednesday, Trump told reporters that “as we make changes, we’ll sit down and talk to you about it.

“It’s no big secret. A lot of administrations make changes after midterms,” he said.

When asked specifically about Kelly, Trump said that “for the most part, I’m very, very happy with this Cabinet.”

Hours later it was announced that Jeff Sessions resigned at the presidents request. Sessions had been at odds with Trump over the investigation into Russia’s role in the 2016 presidential election. Trump named Matthew Whitaker as the acting attorney general, a move that is being challenged in court.

Frail care home resident, 80, ‘left slumped over desk to choke on own saliva’