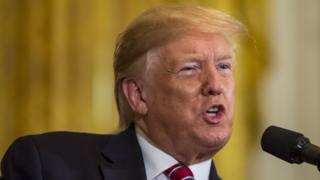 Donald Trump has said he would accept damaging information on his opponent during the 2020 election campaign, even if it came from a foreign government.

In an interview with broadcaster ABC News, the president denied this would count as meddling in an election.

“They have information – I think I’d take it,” he said.

Asked if he thought his son should have called the FBI when he received one such email in 2016, he said: “Give me a break, life doesn’t work that way.”

However, the president later said he would “maybe” contact the FBI if he were offered information and he “thought there was something wrong”.

What did President Trump say?

“You might want to listen, there’s nothing wrong with listening,” he told the US broadcaster.

“If somebody called from a country… [and said] ‘we have information on your opponent’ – I think I’d want to hear it.”

Mr Trump dismissed concerns that this would amount to electoral interference by a foreign power.

“But when somebody comes up with oppo [opposition] research, right… if you go and talk honestly to congressmen, they all do it, they always have, and that’s the way it is. It’s called: oppo, research.”

Contact between the president’s campaign team in 2016 and Russians sparked a lengthy investigation by Special Counsel Robert Mueller into potential collusion and obstruction of justice.

In his report, Mr Mueller stated that although there was insufficient evidence that Mr Trump colluded with Russia, he was happy enough to benefit from the meddling.

How have his opponents reacted?

Joe Biden, currently the frontrunner in the race to become the Democratic nominee in the next US election, accused Mr Trump of “welcoming” foreign interference with his latest comments.

“The #MuellerReport made it clear: A foreign government attacked our 2016 elections to support Trump, Trump welcomed that help, and Trump obstructed the investigation,” she wrote on Twitter.

“Now, he said he’d do it all over again. It’s time to impeach Donald Trump.”

Coronavirus: Govt advises public to stay home, avoid going to malls to curb local transmission
We and our partners use cookies on this site to improve our service, perform analytics, personalize advertising, measure advertising performance, and remember website preferences.Ok