SIERRA VISTA, Ariz. — The sweeping view of undefiled wilderness on the border with Mexico long rewarded hikers who completed the Arizona Trail, an 800-mile route winding through deserts, canyons and forests.

Then something else came into focus a few weeks ago at the forbidding site in the Huachuca Mountains: a lonely segment of border wall, connected to nothing at all, in an area where migrants rarely even try to cross into the United States.

“There it was, this unfinished piece of completely pointless wall, right in this magical place,” said Julia Sheehan, 31, a nurse and former Air Force mechanic who trekked to the site with three other military veterans who are hiking the Arizona Trail. “It’s one of the most senseless things I’ve ever seen.”

The quarter-mile fragment of wall is part of an array of new barrier segments along the border, some of them bizarre in appearance and of no apparent utility, that contractors rushed to build in the waning days of the Trump administration — well after President Biden made it clear that he would halt border wall construction.

Now the incomplete border wall, already one of the costliest megaprojects in United States history, with an estimated eventual price tag of more than $15 billion, is igniting tensions again as critics urge Mr. Biden to tear down parts of the wall and Republican leaders call on him to finish it. 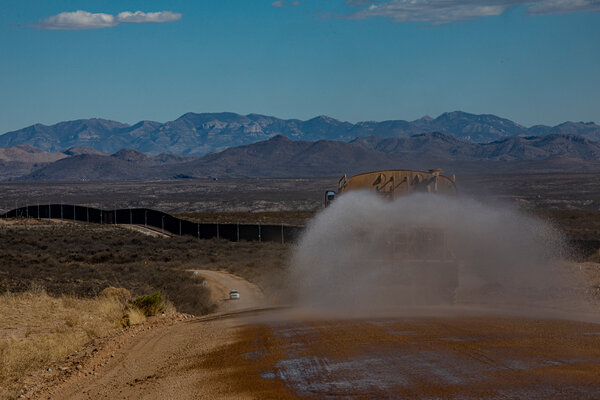 The latest controversy over the wall comes amid a significant increase in migration across the border that is prompting U.S. authorities to search for extra places to hold new arrivals, especially unaccompanied children and teenagers. More than 9,400 young migrants arrived along the border without parents in February, a nearly threefold increase over last year at the same time, creating a serious humanitarian challenge.

The Biden administration suspended construction on the border wall on Jan. 20, the president’s first day in office, announcing a 60-day period during which officials are determining how to proceed.

Donald J. Trump made the wall a symbol of his administration’s efforts to slash immigration. While many stretches of the 1,954-mile border already had some low-level barriers built by previous administrations, the project was mired in controversy from the start.

Only a few miles were built in South Texas, the area most prone to illegal crossings. Instead, much of the construction, especially in the Trump administration’s closing days, has taken place in remote parts of Arizona where crossings in recent years have been relatively uncommon.

Alejandro Mayorkas, Mr. Biden’s homeland security secretary, has been directed to decide whether to “resume, modify, or terminate” projects when the 60-day suspension ends this month. But the last-minute construction efforts, with much of the rushed building activity taking place in the days between the Jan. 6 attack on the Capitol by Trump loyalists and Mr. Biden’s inauguration on Jan. 20, have left a curious tableau for the new administration to evaluate.

Some stretches of the border, especially on federal lands that are relatively flat, now have long, continuous segments of 30-foot high steel barriers that could endure in the desert for decades to come.

But in other areas, border-crossers can easily tiptoe around far-flung islands of wall, some of which look more like conceptual art pieces than imposing barriers to entry.

There are half-dynamited mountaintops where work crews put down their tools in January, leaving a heightened risk of rapid erosion and even dangerous landslides as the summer monsoon season approaches.

In some areas, colossal piles of unused steel bollards linger at deserted work sites, next to idled bulldozers and water-hauling trucks. In Arizona, ranchers are complaining that rough roads carved by work crews into hillsides near uncompleted segments of wall now serve as easy access points for smugglers and others seeking to enter the once-remote areas along the border.

“Now there are so many access roads that it’s possible for someone to walk right up to places where the wall ends, and have someone just pick them up,” said Valer Clark, a conservationist who has bought and sought to preserve about 150,000 acres of land along the border in both the United States and Mexico.

Ms. Clark said a ranch manager recently quit after a break-in at his family’s home, the kind of crime that was rare in the area before the new roads appeared.

Altogether, the Trump administration completed about 453 miles of border wall since 2017. Almost $4 billion for the wall was diverted from funding originally appropriated to the Defense Department.

Most of the construction involved upgrading smaller existing barriers. In places where no barriers previously existed, such as the rugged terrain where the Arizona Trail winds to its terminus, the Trump administration built a total of 47 miles of new primary wall.

Matthew Nelson, the executive director of the Arizona Trail Association, wondered why the Kiewit Corporation, the Nebraska construction giant with the lucrative wall contract for the area, rushed to build a small piece of wall in January — in an area conservation activists were fighting to preserve — when it was likely that construction would be halted anyway once Mr. Biden took office. He questioned if it was an attempt to pressure the new administration into proceeding with additional construction at the site.

Mr. Nelson said the location of the trail in the Coronado National Memorial, a protected expanse managed by the National Park Service, was chosen because of its natural beauty and its location along a relatively safe section of the border where few migrants cross.

“Why rush to put a quarter-mile wall in the middle of nowhere in an area that has never been identified as a high-profile border crossing?” Mr. Nelson asked.

Kiewit officials did not respond to a request for comment regarding the piece of wall the company built in January at the end of the Arizona Trail.

C.B.P. declined to provide specific information about border crossings at the location.

Rodney S. Scott, the chief of the Border Patrol, conceded in November that constructing in South Texas, rather than Arizona, was a “higher priority for the U.S. Border Patrol.” But he said “we elected to go ahead and shift down to a lower priority because I could make a difference there and then.”

The area near the Arizona Trail was not the only place where there was a flurry of building activity in the closing days of the previous administration. Between Jan. 4 and Jan. 8 alone, Customs and Border Protection began construction on 12 additional miles of border wall, according to the agency’s disclosures.

In some places along the border, such as Guadalupe Canyon in southeast Arizona, dynamiting crews were blasting hillsides on Inauguration Day.

Even before the latest construction, there had been anomalies, like an island of wall in the Texas border town of Los Indios, and some of them attracted the attention of federal overseers.

A 34-month audit of border wall construction by the Department of Homeland Security’s Office of Inspector General last year identified significant problems, including in decisions on where wall segments would be built.

Customs and Border Protection “did not use a sound, well-documented methodology to identify and prioritize investments in areas along the border that would best benefit from physical barriers,” the auditors determined.

The Biden administration has not made clear precisely what plans it has for the wall. But in February, after temporarily suspending building activities, President Biden rescinded the national emergency that his predecessor used to justify advancing construction.

Democratic members of Congress from border states, including Veronica Escobar of Texas and Teresa Leger Fernández of New Mexico, wrote to Mr. Biden this month urging him to cancel all remaining construction contracts and divert remaining funds to removing portions of the wall in places with “particularly destructive environmental damage and destruction of sacred sites.”

At the same time, Republicans are positioning themselves around the gaps in the border wall, sometimes literally, in an effort to portray Mr. Biden as soft on immigration.

Senator Lindsey Graham, Republican of South Carolina, complained after a visit in February to the border in Arizona that a gap in the wall there was allowing migrants to illegally enter the country across an unprotected wash.

“Nothing around here makes sense unless you plug this hole,” Mr. Graham said.

Even with the halting of new construction, parts of the federal bureaucracy are slowly continuing forward with the land acquisition process, alarming some landowners who had hoped Mr. Biden would heed their fears about the prospect of living in the barrier’s shadows.

Ricky Garza, a staff lawyer for the Texas Civil Rights Project, said the federal government still has nearly 150 open lawsuits against landowners in South Texas to survey and seize property and potentially begin construction on the border wall or other measures that could be used to detect migrants.

Mr. Garza, who represents some landowners in the region, said Justice Department lawyers have responded to Mr. Biden’s suspension of wall construction by asking the courts to delay legal cases for 60 days.

But some landowners continue to face pressure from the federal government in court, he said. One of them is Melissa Cigarroa, who said the government is still seeking a “right of entry” to her ranch in Zapata County, Texas, where she has long raised Barbary sheep.

“Why would they proceed with these cases if he already indicated he wasn’t going to build another foot and said he would withdraw?” Ms. Cigarroa said. “It felt like the government was working in bad faith.”