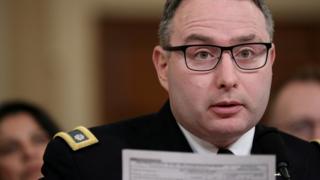 The lawyer of a US official fired by President Donald Trump after testifying at his impeachment trial has defended his client after Mr Trump said he was sacked for being “very insubordinate”.

David Pressman, Lt Col Alexander Vindman’s lawyer, said the remarks were “obviously false” and that Mr Trump was in a “campaign of intimidation”.

Lt Col Vindman was fired after the president was acquitted by the Senate.

Mr Trump also fired the US envoy to the EU, who had also testified against him.

The call led to Mr Trump’s impeachment in December by the House of Representatives for abuse of power and obstruction of Congress. Democrats argued that the president had dangled US aid in exchange for political favours.

In a series of tweets on Saturday, Mr Trump said of Lt Col Vindman: “He was very insubordinate, reported contents of my ‘perfect’ calls incorrectly, & was given a horrendous report by his superior, the man he reported to, who publicly stated that Vindman had problems with judgement, adhering to the chain of command and leaking information”.

Reacting to the comments, Mr Pressman said the president had “made a series of obviously false statements concerning Lieutenant Colonel Vindman; they conflict with the clear personnel record and the entirety of the impeachment record of which the president is well aware.”

He added: “While the most powerful man in the world continues his campaign of intimidation, while too many entrusted with political office continue to remain silent, Lieutenant Colonel Vindman continues his service to our country as a decorated, active duty member of our military”. 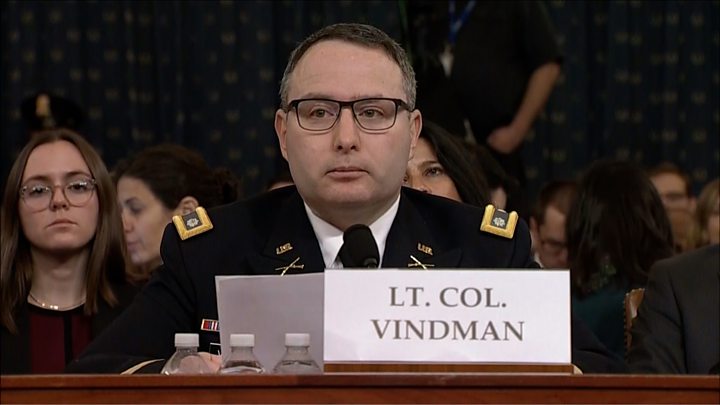 After a historic vote on Wednesday in which senators decided not to remove him from office, Mr Trump reportedly plans a staff shake-up.

On Friday he also fired US ambassador to the EU Gordon Sondland, who said in his testimony that a White House visit by President Zelensky was conditional on Kyiv launching investigations that could be politically helpful to President Trump.

Lt Col Vindman’s twin brother, Yevgeny Vindman, a senior lawyer for the National Security Council, was also sent back to the Department of the Army on Friday.

Who will take on Trump in November?

What we’ve learned from the Nxivm sex cult trial