Home » Americas » ‘Turn Off the Sunshine’: Why Shade Is a Mark of Privilege in Los Angeles

LOS ANGELES — There is no end to the glittering emblems of privilege in this city. Teslas clog the freeways. Affluent families scramble for coveted spots in fancy kindergartens. And up in the hills of Bel-Air, where a sprawling estate just hit the market for a record $225 million, lush trees line the streets, providing welcome relief from punishing heat.

They say the sun has always been the draw of Los Angeles, but these days, shade is increasingly seen as a precious commodity, as the crises of climate change and inequality converge.

Now, city officials, rather than selling sunshine as Los Angeles’s singular attraction, are treating it as a growing crisis.

Using data that overlays areas of intense heat with the busiest public transit routes, the city is rushing to deploy shade to nearly 750 bus stops, using trees, shade sails or umbrellas. In addition, the city has recently hired its first forestry officer, and announced a goal of planting 90,000 shade trees by 2021. As part of this effort, some of the city’s famous palm trees, which have defined the image of the city but do not provide much shade, could be replaced.

“Maybe you haven’t thought about it this way, but shade is an equity issue,” Mayor Eric M. Garcetti said at a recent event on a blazing hot day in South Los Angeles, where he discussed a number of climate initiatives around the city, including creating more shade. 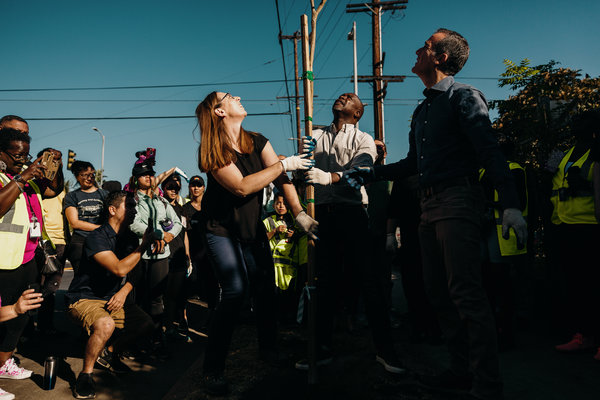 “Think about an elderly Angeleno who relies on public transit to get around her neighborhood,” he continued. “Imagine her standing in the blistering sun in the middle of July waiting for the bus, with hot, dark asphalt. She deserves to be every bit as comfortable as her counterpart in another ZIP code in town.”

Drive across the vast space of Los Angeles and the point becomes clear. In wealthy neighborhoods like Bel-Air or Beverly Hills, spot the hulking trees lining canopied streets. In poorer neighborhoods like South Los Angeles, watch as the people waiting for the bus strain for some sliver of escape from the intense heat. They may find it in a small shadow cast by a stop sign, or under a shopkeeper’s awning, or even, sometimes, just from the shade of a person standing in front of them.

In late October, as Los Angeles was facing record heat for the season, the high winds up in the hills and canyons were stirring up wildfires and people were fleeing their homes. Down on the streets of South Los Angeles, it was blazing hot.

On the corner of Sixth Avenue and Jefferson Boulevard, between the Sixth Avenue Elementary School and Lupita’s Market, Gwendolyn Coakley was standing in the narrow shadow of a streetlight, waiting to help schoolchildren cross the street.

It was the only space where she could find a little respite, as temperatures approached triple digits.

“The heat is terrible,” said Ms. Coakley, a crossing guard, as she clutched a bottle of water. “I’m always looking, trying to find something.”

Sunshine was once a salable commodity for Los Angeles, a singular characteristic used to beckon settlers from across America and beyond. Historians have described this time of selling the sun in the late 19th and early 20th centuries as Los Angeles’s period of boosterism.

Led by the city’s chamber of commerce, which distributed pamphlets and books across the country portraying Southern California as a sun-dappled utopia, the marketing effort helped propel Los Angeles’s growth as a major metropolis.

“People came here specifically to chase the sun,” said Christopher Hawthorne, the city’s chief design officer, a newly created position that he took up last year. “And we sold the sunshine as a commodity.”

As the world warms, the issue of shade has drawn more attention from urban planners. The writer Sam Bloch, in an article in Places Journal this year that focused on Los Angeles, called shade “an index of inequality, a requirement for public health, and a mandate for urban planners and designers.”

Mr. Hawthorne, a former architectural critic for The Los Angeles Times, has been thinking for years about the city’s public spaces and the lack of shade as a measure of inequality. When he talks about the subject, he likes to invoke the title of a 1942 book of short stories about Los Angeles by the writer Timothy Turner: “Turn Off the Sunshine.”

“We can all relate to that title today,” he said, at the recent event where Mr. Garcetti appeared. “There are times all of us in Los Angeles wish we could turn off the sunshine, and there are more and more of those days every year as a result of climate change.”

In an interview, Mr. Hawthorne said, “We have pockets of beautiful urban design and beautiful stretches of shade, but it’s definitely fair to say that it has not been distributed in an equitable way.”

Angelenos high on the income ladder go everywhere in air-conditioned cars, leaving the city’s buses and baking sidewalks largely to those on the lower economic rungs. Citing the impact of climate change, Mr. Hawthorne said: “This city is noticeably less hospitable to pedestrians now than it was when I got here in 2004. So 15 years has changed this conversation.” Mr. Hawthorne has been leading the effort to bring shade to nearly 750 bus stops, utilizing data that overlays the hottest areas of the city with the locations of the busiest bus stops.

Researchers at U.C.L.A. have forecast that Los Angeles is likely to see a sharp increase in the number of days of extreme heat — defined as 95 degrees or higher. Downtown Los Angeles currently experiences about seven days of extreme heat per year, but that figure could rise to 22 by 2050 and to more than 50 days by the end of the century, according to forecasts. (Of course, temperatures don’t need to soar above 95 degrees for a lack of shade to be a burden on the city’s poor.)

“These communities should have access to the same resources other communities have,” she said. “I don’t want a bunch of small trees. We need to find spaces for big trees.”

Still, in some communities that have historically been neglected by the city, new trees can be a tough sell. Residents complain that the city has planted trees in the past and then failed to trim them, creating neighborhood hazards and causing injuries.

The lack of trees in some poorer communities is also connected to a history of abusive policing. For years, the city kept tree growth to a minimum in some neighborhoods because police officers were worried that trees could be places to stash drugs and guns.

In an interview, Ms. Malarich showed a map of the city’s tree canopy. Wealthy areas of West Los Angeles and the Los Feliz neighborhood are dark green, with a tree canopy of more than 35 percent. South Los Angeles, by contrast, is shaded lightly, with just 10 percent to 12 percent tree cover.

Ms. Malarich said trees are also a public health issue, citing studies showing that more trees in a community correlates with lower asthma rates, reduced hospital visits during heat waves and improved mental health. “All our communities should have access to those benefits,” she said.

Los Angeles, with its many different climate zones, can host countless types of trees, Ms. Malarich said, and she is drawing on several books and resources, such as “A Californian’s Guide to the Trees Among Us,” to decide which trees to plant and where.

And what about Los Angeles’s famous palm trees, which are essential to the city’s image of itself but do not provide much cover? There may be fewer of them in the future, she said, because as some palm trees reach the end of their life cycle, they may not be replaced.

The attention given to creating more shade is part of a broader effort by Los Angeles, Mr. Hawthorne said, to “draw people back to the public realm,” in a city famously attached to the automobile.

“If we can’t turn off the sunshine, at least we can find respite and refuge, and a sense that the city increasingly is designed for all of us,” he said.

Call of the Wilde: Montreal Canadiens edge the Arizona Coyotes 2-1