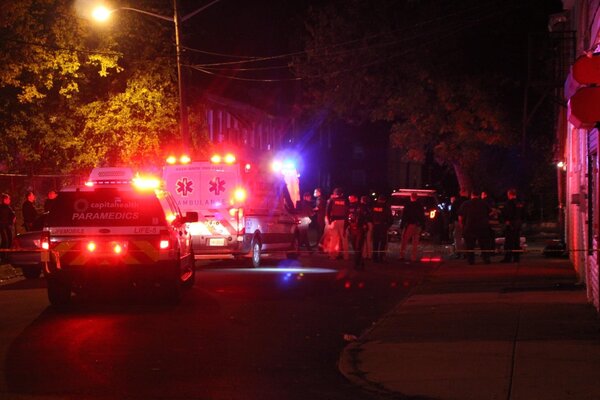 Two young brothers were shot and killed in their home on Tuesday night in Trenton, N.J., the latest victims of a surge in homicides this year in the state’s capital, officials said.

The two boys — Gustavo Perez, 16, and Johnny Perez, 8, were on the second floor of a house on Mulberry Street on the east side of the city when at least one gunman fired at least six rounds at around 10:30 p.m., a spokeswoman for the Mercer County prosecutor’s office said.

“The children did not deserve to be at the other end of a barrel,” Mayor Reed Gusciora said at a news conference on Wednesday. “And we have to do better as a community to make sure that this does not happen again.”

Neither the gunman nor a possible motive have been publicly identified. But the city’s police director, Sheilah Coley, said at a news conference that detectives believed the house had been targeted.

In an interview, Mr. Gusciora, a Democrat, said that the authorities were investigating whether the killings were connected to a family gathering that had taken place before the shooting.

“We’re at a loss of what transpired at the family gathering, or whether this is gang-related or family-related,” Mr. Gusciora said, calling the shooting “an outrage to the community.”

Like many cities around the United States, Trenton has seen a striking rise in violence. With about 10 weeks left in the year, the city has had 34 homicides — more than double its total from last year, when 15 people were killed.

Mr. Gusciora said that the number of killings has also put Trenton, a city of about 84,000, close to its deadliest year on record; in 2013, 37 people were killed in homicides, according to state police data. He tied the spike in violence to the economic and social disruption caused by the coronavirus.

“I can’t help but to think that Covid was a contributing factor,” Mr. Gusciora said. “Both because people are out of work, and kids are all at home. So they’re more susceptible to engaging in violence.”

Shootings are on the rise in other large cities across the country, including Chicago, Minneapolis and New York. Some conservatives have linked the violence to recent protests in cities against police brutality and the ongoing debate over the future of policing in the country.

Both liberal lawmakers and experts on crime have also said that the pandemic has deepened the systemic problems that often fuel gun violence, including poverty and unemployment.

Mr. Gusciora said that Trenton — where the median household income is $34,000, less than half the statewide average — had acutely felt the effects of the crisis. Numerous social programs had been disrupted, he said, because of a lack of money.

The mayor also pointed to the state’s release of inmates from prisons and jails, a move meant to curb the spread of the coronavirus in those facilities, saying that three of the homicides involved people released under the program.

As violence has risen in Trenton, Mr. Gusciora and the city’s Police Department has moved to deploy more officers throughout the city.

The State Police have also provided additional patrols, and Mr. Gusciora said the state would open up a “real-time crime center” that would use data to predict where crime may occur.