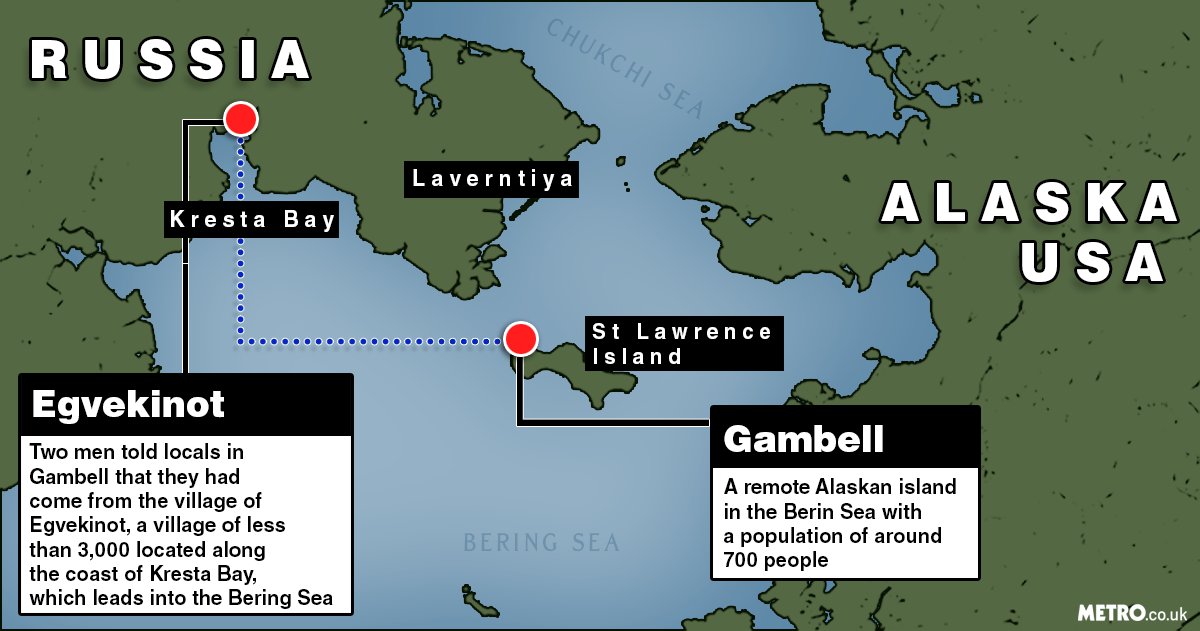 Two Russian men facing the prospect of being sent to fight and die in Ukraine have sought asylum in the US after landing a small boat off the coast of Alaska.

They turned up near the remote settlement of Gambell, an isolated Alaska Native community of about 600 people on Saint Lawrence Island earlier this week.

It is believed they crossed the Bering Strait to reach their location, a body of water which separates North America from mainland Russia.

Gambell’s town clerk said the men claimed to have sailed from the town of Egvekinot in northeastern Russia, approximately 300 miles by sea.

The journey reportedly took them around two weeks to complete.

One local said the men told them they were fleeing Vladimir Putin’s ‘partial mobilisation’ of Russian civilians to fight the war in Ukraine, which has triggered an exodus.

They revealed one of the two men, who remain unnamed, spoke some English, while the other appeared to be of the Siberian Yupik ethnicity.

Upon arrival they were handed over to local authorities who escorted them to Anchorage, the biggest city in Alaska.

They were processed in accordance with US immigration laws, a spokesperson for the Department of Homeland Security later confirmed.

The state’s governor Mike Dunleavy said: ‘These two individuals that came over from Russia in a boat and were detained in Gambell, my understanding is, they are in Anchorage now being dealt with by federal authorities.

‘We have no indication that’s going to happen, so this may be a one-off.’

The Russian Embassy in Washington said its diplomats will hold a ‘telephone conversation’ with the two male citizens, according to Russian state news agency TASS.

Dan Sullivan, one of Alaska’s two Republican senators, said he was alerted to the matter by a ‘senior community leader from the Bering Strait region’ in a statement on Tuesday morning.

‘Second, given Alaska’s proximity to Russia, our state has a vital role to play in securing America’s national security.’

Authorities stopped Russian citizens illegally trying to enter the US via Canada on 42 occasions in August alone, up from 15 times in July and nine times in August 2021.

Trudeau, Singapore PM discuss the detention of Canadians amid spat with China