The judge, Zahid N. Quraishi of New Jersey, said after his selection by President Biden, “Candidly, I would prefer to be the hundredth, if not the thousandth.” 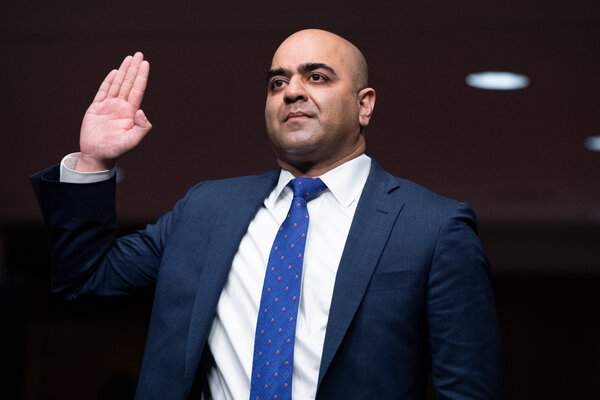 Zahid N. Quraishi, a federal magistrate judge and the son of Pakistani immigrants, was confirmed by the U.S. Senate for a federal judgeship in New Jersey on Thursday, becoming the first Muslim Federal District Court judge in the nation’s history.

Judge Quraishi acknowledged his history-making status after President Biden announced his intention to nominate him in March. “Candidly,” the judge said, “I would prefer to be the hundredth, if not the thousandth.” He added, “I understand what it means to the community.”

The Senate confirmation on Thursday, by a vote of 81 to 16, touched off a wave of congratulatory messages on social media from Democrats and progressives. Senator Cory Booker of New Jersey called Judge Quraishi “an excellent addition to the court.” Senator Mazie Hirono of Hawaii said “Congratulations Judge Quraishi!” The Senate majority leader, Chuck Schumer of New York, and Senator Gary Peters of Michigan released congratulatory messages too.

Senator Bob Menendez of New Jersey called Mr. Quraishi “a man of integrity, a consummate public servant, and a trailblazer for Asian Americans and Muslim Americans across this country who dream of one day presiding over a court of their own.” He added: “We should all draw inspiration from his story, because it is a story that could only take place in the United States of America.”

Underscoring the historical significance of the confirmation, Janai Nelson, associate director-counsel of NAACP Legal Defense & Educational Fund, Inc., said “Now seems like a good time to note that the first federal courts were created over 230 years ago.”