A Trump supporter who stormed the Capitol building in Washington has described the moment a woman was shot dead by security forces.

Video of the incident shows the man standing next to the victim at the moment the fatal shot is fired. He is then seen trying to help her as she falls to the ground.

Interviewed later by a local news reporter from WUSA 9, his hands can be seen smeared with her blood.

“We had stormed into the chambers inside and there was a young woman who rushed to the windows,” he said.

“A number of police and secret service were saying ‘get back, get down, get out of the way’. She didn’t heed the call and as we kind of raced up to grab people and pull them back they shot her in the neck and she fell back on me.

“And she started to say ‘it’s fine, it’s cool’ and then she started kinda moving weird and blood was coming out of her mouth and neck and nose and I don’t know if she’s alive or dead any more.”

He added: “I’m not injured..it could have been me, but she went in first.”

The invasion of the Capitol building was intended to disrupt the formal confirmation of the Electoral College votes in favour of President-elect Joe Biden. The session of Congress was suspended, but later resumed after the building had been cleared and order restored. 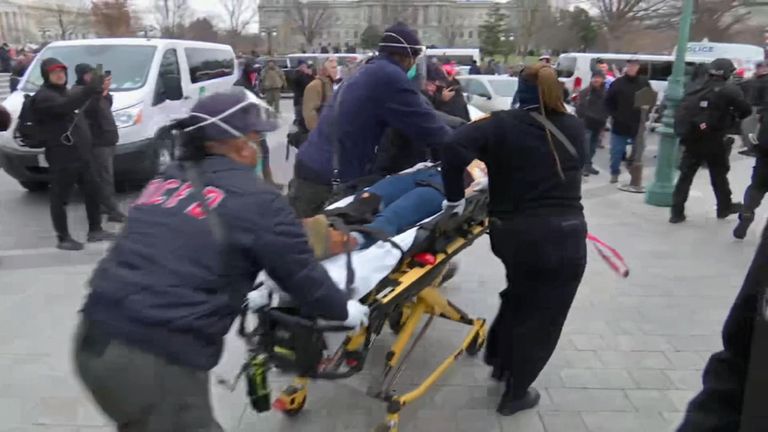 Reopening the session, Senate Majority Leader Mitch McConnell said: “I understand one woman was shot and tragically lost her life.

“We mourn her and feel for her friends and family.

“These images were projected to the world. Foreign embassies cabled their home capitals to report harrowing scenes at the very heart of our democracy.

“This will be a stain on our democracy not so easily washed away.”

I am not a racist, insists Trump