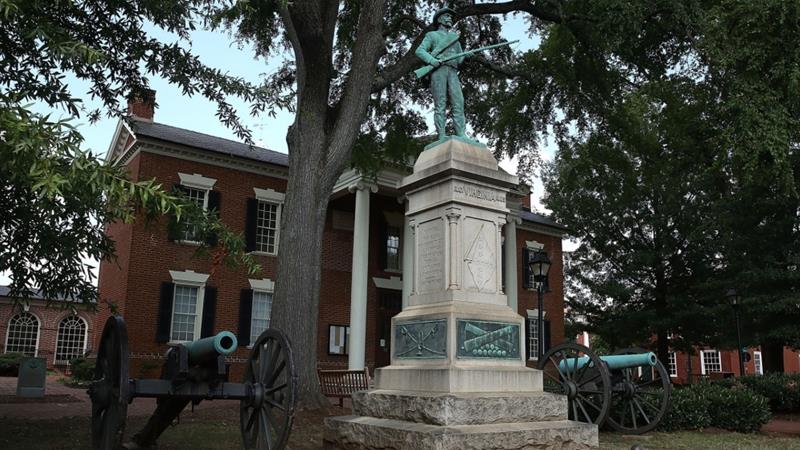 A Confederate statue has been taken down in Charlottesville, Virginia, where a white supremacist rally three years ago resulted in a counter-protester’s death.

The Albemarle County Board of supervisors voted in August to remove the “At Ready” statue, which displays a Confederate soldier, from outside the county court.

Racial justice protests in the United States, which began in the wake of the police killing of George Floyd in Minneapolis and have since been fuelled by other high-profile cases, have renewed calls for the removal of Confederate monuments across the country.

On Saturday, a crowd in Charlottesville cheered as the “At Ready” statue, which has been in place for 111 years, was lifted off its pedestal with a crane.

The crowd also cheered when the statue’s bronze plaques and an accompanying cannon were also removed, a livestream on the county’s Facebook page showed.

The city of Charlottesville soon after voted to remove the statue of Lee, as well as one of Confederate general Thomas “Stonewall” Jackson, but a legal challenge has sent the case to the state’s Supreme Court.

An attempt by the state’s governor to remove a huge statue of Lee on state property in Richmond, Virginia, has also been blocked pending a legal challenge.

In June, protesters in that city pulled down a statue of Confederate president Jefferson Davis, prompting the mayor to order the removal of 11 Confederate memorials on city property.

New space race to bring satellite Internet to the world

Why this will be the most Hispanic Super Bowl ever