Home » Americas » US election 2020: Trump team insists he’s ‘alive and kicking’ as he calls for knife-edge counts to cease

Donald Trump is “alive and kicking” as he prepares to launch legal action to stop some counts and challenge results in key battlegrounds he is projected to lose, his team has said.

The US president’s campaign manager gave an update on their tactics and claimed Americans had lost faith in democracy.

He repeated unsubstantiated accusations that the Democrats were cheating and stealing the US election, while ballots are sorted through in five knife-edge races that are still too close to call.

Live updates as election still too close to call

Neither Mr Trump nor Joe Biden have yet clinched the vital 270 Electoral College votes needed to guarantee them the keys to the White House, but a result is edging closer.

The incumbent Republican is ahead in Georgia, North Carolina and Pennsylvania while Mr Biden is leading in Arizona and Nevada.

But as the ballots are counted in batches, those razor-thin margins could narrow further, or see one candidate overtake the other.

The momentum seems to be behind Mr Biden, who is winning the popular vote and within touching distance of the 270 Electoral College votes needed to guarantee the presidency, on 253. 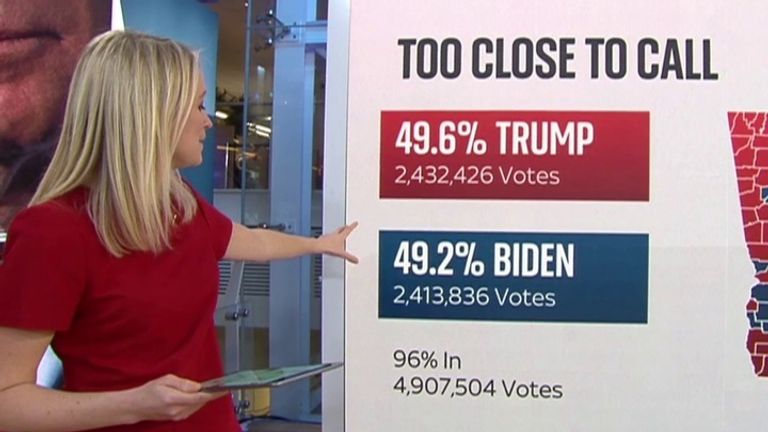 He had demanded election administrators “stop the count” in Arizona, Nevada, Pennsylvania and Georgia, and has claimed a “big legal win” after his campaign said they got a court order in Philadelphia to enter a count to observe it.

“All of the recent Biden claimed states will be legally challenged by us for voter fraud and state election fraud,” he vowed in a tweet, again without providing evidence. 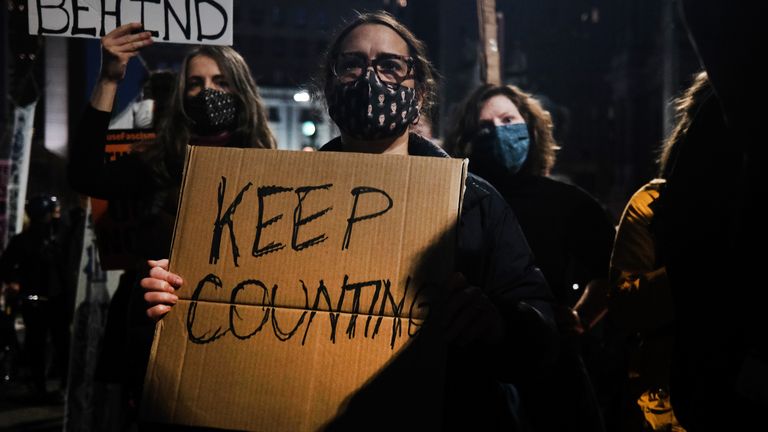 In Nevada, his campaign declared at a news conference that “the system is corrupt”.

They presented one resident who claimed she had been the victim of voter fraud and another who said he was denied access to watch ballots being counted, but they all refused to take questions or verify those accounts. One adviser, Bob Bauer, said: “It is to create an opportunity to message falsely about what is taking place in the electoral process… This is part of a broader misinformation campaign.”

“Fast is great and we appreciate fast; we more appreciate accuracy,” he said. “Accuracy is going to be the bedrock upon which people will believe the outcomes of this election, be they on the winning side or the losing side.”

A result there is expected to be announced later on Thursday, but could be delayed further if it goes to a recount.

Turning a New Brunswick community garden into an urban farm