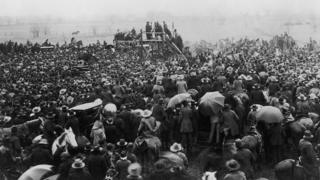 The US House of Representatives has overwhelming voted to make lynching a federal crime in the country.

The move comes over 100 years after lawmakers first attempted to criminalise lynching.

The bill – passed with a 410-4 majority – is named after a black teenager whose murder spurred the Civil Rights movement. The Senate passed it in 2018.

The two bills must now be combined before being signed into law by President Donald Trump.

Lynching is murder by a mob with no due process or rule of law. Across the US, thousands of African Americans were lynched by white mobs, often by hanging or torture, in the 19th and 20th Centuries.

According to the lawmakers, at least 4,742 people were reported lynched in the US between 1882 and 1968. In 99% of cases the perpetrators escaped punishment.

The Emmett Till Antilynching Act is named after a the 14-year-old Chicago boy who was killed while visiting family in Mississippi in 1955.

Lynching is an American evil. Today, we
send a strong message that violence—and race-based violence, in particular—has no place in America.

Thank you to my colleagues in the House & Senate who have joined me to correct this injustice. #OutlawLynching https://t.co/io451Agyne pic.twitter.com/3Uq1U6fTFM

Speaking on the House floor on Wednesday, Illinois Congressman Bobby Rush, who co-sponsored the legislation, said he was “pleased that the language we are voting on today has already been approved by the Senate, and I am exceptionally hopeful that it will face no further obstacles on its path to the president’s desk”.

The earliest attempt by the House to pass an anti-lynching bill was 1900, according to the Washington Post, and was sponsored by Rep George Henry White – then the country’s only black member of Congress.