Mr Hof ran as an outspoken Republican for Nevada’s Assembly District 36 before his death at the age of 72.

He remained on the ballot due to state law and GOP officials encouraged voters to still cast their ballots for him in order to stop Democrats winning the seat.

Results showed that Mr Hof received 68.3% of the vote versus his Democrat rival Lesia Romanov’s 31.7% following his unexpected death on 16 October.

The strip club owner, who ran five legal brothels in Nevada, styled himself as America’s best-known pimp after appearing on TV show Cathouse.

:: Blow for Trump as Congress is split in US midterms

During his campaign, he dubbed himself the “Trump from Pahrump” in reference to the town where he lived in Nevada.

“It’s kind of like Moses,” he told Think Progress ahead of the election.

“He’s not going to make it to the promised land with us… but we hope he’s watching from the great beyond.”

He said Mr Hof “died quietly in his sleep” at Love Ranch – one of the brothels he operated in Crystal, Nevada.

Police did not suspect foul play at the time of his death and no one who was with him the night before noticed any signs of ill health. 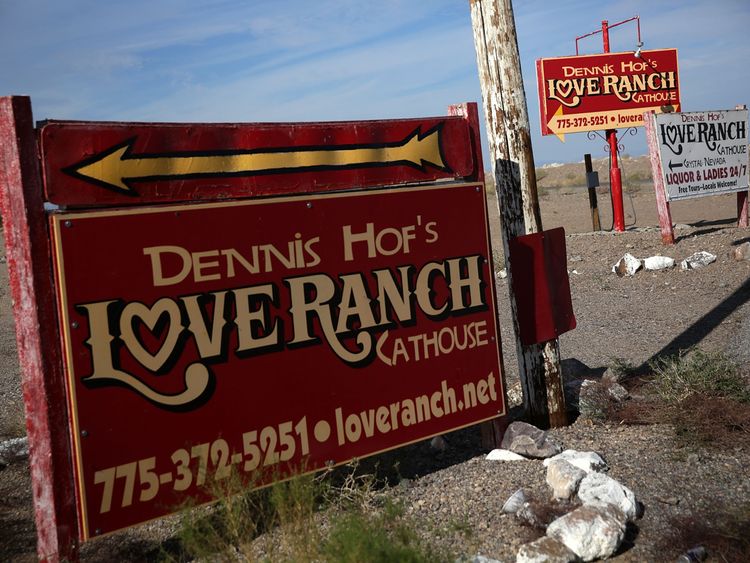 Mr Hof’s campaign was based on deeply conservative ideals – including a hard-line policy on immigration and expansion of gun rights.

He also fought against outlawing brothels.

Around 20 brothels operate in Nevada – the only US state where prostitution is legal.

In a previous interview, Mr Hof said: “This really is the Trump movement.

“People will set aside for a moment their moral beliefs, their religious beliefs, to get somebody that is honest in office. Trump is the trailblazer, he is the Christopher Columbus of honest politics.”

In June, Mr Hof won the nomination contest for a Republican state assembly seat, supported by Trump associates Roger Stone and Grover Norquist and evangelical Christians who said they voted for him because they believed he would clean up politics.

Is Joe Biden the next US President and will the result be contested?

‘I Am Shaken’: Spate of Violent Subway Attacks Unnerves Riders