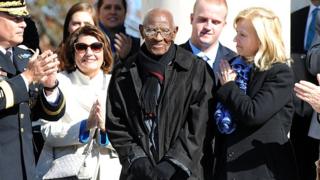 The United States’ oldest known WW2 military veteran, who was also thought to be the country’s oldest man, has died in Texas at the age of 112.

Richard Overton served in an all-black army unit for three years and was involved in combat operations and beach landings in the Pacific during the war.

He was honoured on Veterans Day in 2013 by President Barack Obama.

He credited God for his long life – though he also said whisky and cigars had played their part.

“I been smoking cigars from when I was 18 years old, I’m still a smoking ’em. Twelve a day,” he is quoted as saying by local TV.

He was in his 30s when he volunteered for the army, served in the all-black 1887th Engineer Aviation Battalion, and was at Pearl Harbor not long after the Japanese attack in 1941.

“We got in the foxholes, and bullets were coming over our heads,” Mr Overton said in one interview of one landing, reminiscing about how he had to clear dead bodies from the battlefield.

Born in 1906, he spent most of his life in Austin, and for his 111th birthday last year, Austin City Council renamed the street he had lived on for more than 70 years Richard Overton Avenue.

“With his quick wit and kind spirit, he touched the lives of so many, and I am deeply honoured to have known him,” Texas Governor Greg Abbott said in a statement on Thursday, calling him “an American icon and Texas legend”.

'It's a hoax,' say California's maskless rebels as coronavirus outbreak worsens in the US