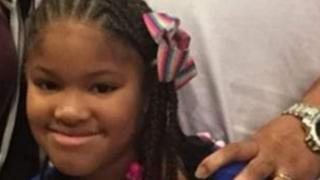 US police have charged a man in connection with the drive-by shooting of a seven-year-old girl in Texas.

Jazmine Barnes was shot dead while in her family’s car near Houston last month.

Eric Black Jr, 20, has admitted involvement in the shooting and been charged with murder, Harris County Sheriff’s Office said in a statement.

Investigators believe the attack on Jazmine’s family could have been the result of mistaken identity.

Jazmine’s mother, LaPorsha Washington, was also shot and injured. Three other children were in the car at the time.

A composite sketch of the suspect released last week showed a white male believed to be in his 30s or 40s. Eric Black is black, but police say other suspects could be involved.

Campaigners had feared the shooting, on an African-American family, may have been racially motivated.

What do police say?

The statement from Harris County Sheriff’s Office said Eric Black had been arrested as the result of a tip-off.

Investigators were continuing to “pursue evidence that could possibly lead to other suspects being charged”, the statement said.

“At this time, investigators do not believe Jazmine’s family was the intended target of the shooting, and that they were possibly shot as a result of mistaken identity.”

All evidence gathered so far in the Jazmine Barnes Homicide case supports investigators’ strong belief that she and her family were innocent victims. #JusticeforJazmine #hounews

Jazmine’s funeral is due to take place on Tuesday.

How did the shooting happen?

Police said Ms Washington, Jazmine and her three sisters were in the car near a Houston-area Walmart store on 30 December when a red pick-up truck pulled alongside them and a man inside opened fire.

Jazmine was struck in the head by a bullet and died at the scene.

The case caused widespread outrage and celebrities joined an appeal to find Jazmine’s killer using the hashtag #JusticeForJazmine. A rally in Houston on Saturday attracted about 1,000 people.

Ms Washington, who was shot in the arm, tearfully recounted the attack from her hospital bed and urged the gunman to give himself up.