Home » Americas » US politician: No interview without male chaperone 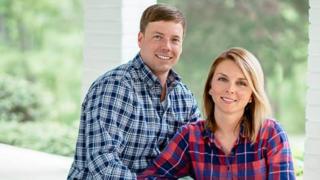 A Republican candidate for Mississippi governor has refused to be interviewed by a female reporter unless she brings a male colleague with her.

Larrison Campbell, 40, said she had asked to shadow Robert Foster on a 15-hour “ride-a-long” on his campaign, but was denied because of her sex.

Mr Foster said he was acting out of precaution and he did not want to raise any suspicions about his marriage.

“This is my truck, and in my truck we go by my rules,” he said on CNN.

During the CNN interview with Campbell and Mr Foster on Thursday, the 36-year-old gubernatorial candidate cited his religion and faith, arguing he made a vow to his wife to not be alone with someone of the opposite sex.

He cited the late Christian evangelist Billy Graham, who had said he would not spend time alone with any woman who was not his wife, as well as Vice-President Mike Pence, who has said he will not eat alone with a woman other than his wife.

“I don’t trust the perception that the world puts on people when they see things and they don’t ask a question, they don’t look to find out the truth,” he said.

“Perception is a reality in this world, and I don’t want to give anybody the opinion that I’m doing something that I should not be doing.”

Mr Foster said following the #MeToo movement, “men are under attack all the time”.

“I’m not going to allow myself to be put in a situation with any female where they can make an accusation against me” without someone else in attendance, he said.

When asked if he would allow the 15-hour interview with a man, Mr Foster said he would, adding: “I stand my ground.”

She argued that if she were expected to go by his rules in his truck, he should provide the male chaperone.

Mr Foster said his campaign staff was too small at the time to provide assistance.

“What you’re saying here is that a woman is a sexual object first and a reporter second,” Campbell told Mr Foster on Thursday.

She asked Mr Foster how he could tell voters he would be a good governor if he could not be alone in a room with a woman, citing numerous female staff members in the current governor’s office.

Mr Foster said he could achieve that by leaving the door open or having people in the room next door, but that the 15-hour vehicle ride was a different situation.

The debate over Mr Foster and Campbell has drawn renewed attention to the sentiment that men are uncomfortable being with women alone.

Two years ago Mr Pence made headlines after comments he made in 2002 that he “never eats alone with a woman other than his wife and that he won’t attend events featuring alcohol without her by his side” resurfaced.

Some argue the practice is a matter of professionalism in the workplace while critics decry it as sexist and unfair to women in professional settings.