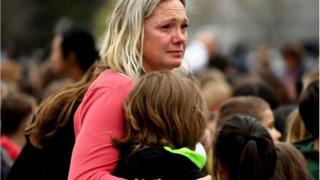 Months before a fatal school shooting this week in Colorado, a parent warned that student violence and bullying could cause “a repeat of Columbine”.

The parent also alleged “an extremely high drug culture” on the campus in suburban Denver, warning it was “the perfect storm”.

The call was made five months before the attack.

One student died and eight others were injured on Tuesday in the gunfire at STEM School Highlands Ranch.

The unnamed parent called a school district official, who detailed the claims in a letter to the school’s director.

According to CBS News, the parent mentioned the 1999 mass shooting at Columbine High School, one of the most notorious such attacks in the US, which left 13 dead just 8km (5 miles) from Tuesday’s assault.

But the school’s director reportedly said a subsequent investigation found no evidence to support the allegations.

STEM school officials filed a lawsuit in January against the anonymous parent for spreading “defamatory statements” about the school, reports CBS News.

The BBC contacted the school for comment, but did not receive an immediate reply.

But the school’s executive director, Penelope Eucker, said in a statement to CNN: “The safety and wellbeing of our students and staff is our highest priority.

“Like any school with more than 1,800 students, we receive complaints, all of which we take seriously and investigate promptly.”

Eighteen-year-old Kendrick Castillo died in the assault while trying to disarm one of the attackers, his classmates say.

Both suspects in the shooting, aged 18 and 16, were pupils at the charter school. Their motivation is unclear.

They are due in court next week.