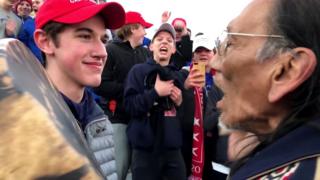 A teenager involved in a controversial encounter between a Native American man and a crowd of students has spoken out.

A video appeared to show some of the boys laughing and jeering as Omaha elder Nathan Phillips sang and drummed in Washington.

The footage, which went viral, led to widespread criticism of the boys.

However, additional video footage has provided further details of the incident, while student Nick Sandmann has denied mocking Mr Phillips.

“I did not make any hand gestures or aggressive moves,” he said. “I believed that by remaining motionless and calm, I was helping to diffuse the situation.”

What do we know happened?

At least three groups appear to be involved in Friday’s incident.

Students from Kentucky’s Covington Catholic High School, who had finished taking part in March for Life, an anti-abortion rally, were gathered at the Lincoln Memorial. The group of teenagers was predominantly white, and many wore Make America Great Again caps.

Mr Phillips – a Vietnam war veteran – and many other Native American activists were also at the memorial, having taken part in the Indigenous Peoples March.

Meanwhile, a group of black men, who called themselves Hebrew Israelites, were at the scene. Video footage shows them shouting insults at many people, including Native Americans, as well as the schoolboys.

As the group shouted at the students, some of the teenagers began chanting, and one of them took his top off.

Mr Phillips then approached the students, singing and beating a drum, in what he called a prayer to defuse tensions.

He was surrounded by the students, some of whom began chanting and singing as well.

How did the controversy break out?

A short video emerged showing Mr Sandmann smiling and standing directly in front of Mr Phillips as he beat the drum. Other students laughed, shouted and clapped along.

The video went viral as many accused the boys of mocking and being disrespectful towards the elder.

The Covington Catholic High School apologised to Mr Phillips and said they would investigate and “take appropriate action, up to and including expulsion”.

Meanwhile, the Sisters of Mercy, a Catholic group, also criticised the boys’ behaviour, saying the videos showed “a bigoted disrespect of indigenous peoples”.

However, supporters of the students said they were being unfairly targeted, while others began searching social media for further video, which showed the Hebrew Israelites group shouting at the students, and Mr Phillips approaching them.

In a statement released by a PR company, Mr Sandmann said “outright lies” were being spread about him and his family and that he had received death threats as a result of the incident.

He said the group of African American protesters had called the students “racists” and “incest kids”.

“Because we were being loudly attacked and taunted in public, a student in our group asked one of our teacher chaperones for permission to begin our school spirit chants to counter the hateful things that were being shouted at our group.”

Then, he said, the Native American protesters approached the students, including Mr Phillips, who was playing his drum.

“I did not see anyone try to block his path,” he said. “He locked eyes with me and approached me, coming within inches of my face. He played his drum the entire time he was in my face.”

“To be honest, I was startled and confused as to why he had approached me,” he said.

“I never felt like I was blocking the Native American protester. He did not make any attempt to go around me… I was not intentionally making faces at the protester. I did smile at one point because I wanted him to know that I was not going to become angry, intimidated or be provoked into a larger confrontation.”

“I respect this person’s right to protest and engage in free speech activities… I believe he should re-think his tactics of invading the personal space of others, but that is his choice to make.”

What do other accounts say?

Mr Sandmann said that the students only used school chants, and he did not hear anyone make hateful or racist remarks.

However, Mr Phillips, who appeared upset in a video after that encounter, said he heard the students saying “build that wall”.

That phrase was not audible in video footage of the incident. Two other participants in the Indigenous Peoples March, and a photojournalist covering the march, told US media they heard people chanting “build that wall” and “Trump 2020”.

Mr Phillips told AP news agency he was trying to reach the Lincoln statue to pray when one of the students blocked him.

“They were marking remarks to each other… [such as] ‘In my state those Indians are nothing but a bunch of drunks’,” he said.

Meanwhile, Marcus Frejo, who accompanied Mr Phillips, told the New York Times he heard the students making noises that appeared to mock Native American chanting – although he also heard some of the students sing along.

US media reports say that the students performed a haka chant, and some appeared to make the tomahawk chop gesture – which many Native Americans consider disrespectful.

Separately, one of the men in the Hebrew Israelites group issued a Facebook video, saying that the students had “started it”.

He accused the students of “mocking us while we’re having discourse”, and argued that, although his group had been vocal, they “didn’t approach” the students and there was no “physical situation”.

Fear of foreign interference looms large in China's version of Hong Kong law
We and our partners use cookies on this site to improve our service, perform analytics, personalize advertising, measure advertising performance, and remember website preferences.Ok