Weather: Expect a high in the upper 70s with a chance of showers this afternoon and tonight. 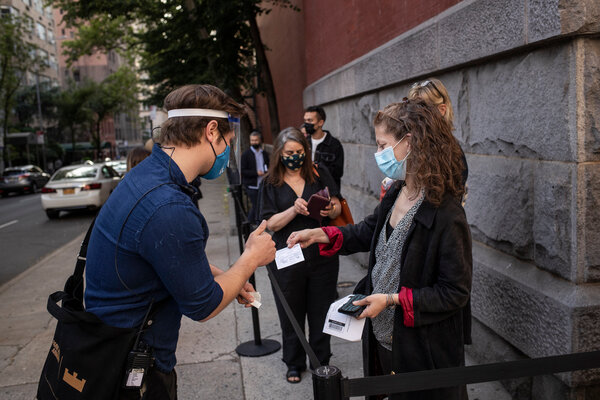 As the Delta variant continues to drive Covid-19 cases in New York, those who are 12 and older will be required to show proof of having received at least one dose of a Covid-19 vaccine in order to participate in New York City’s indoor dining, fitness or entertainment venues starting today.

Mayor Bill de Blasio announced in a news conference on Monday that he had signed an executive order requiring indoor venues to start checking for vaccination status. The rule will go into effect tomorrow, but enforcement will not start until Sept. 13.

“I am absolutely certain this is going to motivate a lot of people to get vaccinated,” Mayor de Blasio said.

Businesses will be required to hang posters describing the mandate near their entrances and those that do not comply will be subject to fines. Exceptions can be made to allow customers to use the bathroom, or to enter the premises for a few minutes for other reasons.

As of Monday, more than 10 million doses of the vaccine had been administered in New York City, which the mayor cited as proof that vaccination incentives and mandates have been effective.

“We know that this is going to reach hundreds of thousands of people, convince them it’s time,” Mr. de Blasio said. “Just buy into this, because it’s going to work for all of us. It’s going to make us all safer.”

The city has hired 570 people to go out and canvass small businesses in every ZIP code with information about the vaccination requirement, Mr. de Blasio said. The goal is to canvass all businesses across the city within the next three weeks. A $10 million advertising campaign will also spread the word about the new mandate.

Starting Sept. 13, agencies such as the Department of Health will be able to start issuing fines and other penalties against indoor venues that do not check vaccination status. The sheriff’s office may also get involved if customers use fake vaccine cards, the mayor said.

How to get a vaccine passport

There are two official apps, NYC Covid Safe and the Excelsior Pass, but showing your paper vaccine card is fine too.

The Excelsior Pass, the state’s vaccine passport app, verifies applications against the city and state vaccination records. The city’s app, NYC Covid Safe, enables users to take a picture of their vaccine card and store it.

People vaccinated in the United States can use the city’s app or the paper card, and a photo on their smartphone of their paper card should work too. New Yorkers vaccinated out of state can get an Excelsior Pass, if they ask their health care provider to upload that information to the New York vaccine registries.

For those who were vaccinated outside of the country, paperwork from abroad showing that people received any of the eight vaccines approved for emergency use by the World Health Organization is also acceptable.

After Backlash, Lawmakers Will Issue Report on Cuomo Impeachment Inquiry

Becoming the Un-Cuomo: Kathy Hochul’s Rise to the Governorship

Events leading up to the “We Love NYC: The Homecoming Concert” taking place Aug. 21 in Central Park, kicked off Monday with live performances in the Bronx. [NBC New York]

And finally: Readers sound off on how the pandemic changed the way they see the city

Last week, we asked our readers to tell us about the pandemic moment that changed their view of New York City, and the responses were enlightening. From stories of struggling to make ends meet to hopeful expressions for the future, here are some of your thoughts on how the pandemic changed what you believe makes this city tick.

We’ll be exploring the future of the city in a virtual event Thursday, along with the Democratic mayoral nominee, Eric Adams, the chef Marcus Samuelsson and the playwright Jeremy O. Harris. Times subscribers can R.S.V.P. here.

Here are some readers’ responses, which have been edited for brevity.

Crossing Central Park West without needing to look both ways for cars made me profoundly sad and also made me love the city even more for all that I have taken for granted.

One Friday night last summer, my plans were canceled because of a sudden downpour. I decided to bike home over a mostly empty Brooklyn Bridge in the rain. It was then that I realized that I was seeing a perspective of N.Y.C. that I otherwise would not have on a subway underground, or glued to my phone in the back of an Uber. The pandemic and my adjustments in lifestyle have allowed me to see slices of the city that I never saw and appreciated before.

I’ve been struggling with my unaffordable housing for years, and when N.Y.C. went on lockdown, I had a lot of time to think about what’s next. I decided that living in N.Y. is not for me. Things are never going to be better for low-income people. Yet I can’t afford to move. Go figure. I was born here but moved away and decided to move back in 2011. I regret it every day.

My wife pointed out one afternoon from our nearby A train subway platform the two dozen or so hypodermic needles on the tracks below. It truly made me wonder if we’d been transported back in time, to a decade when neither of us were old enough to live in New York. A new wave of desperation and addiction; just one of many human responses to the pandemic.

I’ve walked down Vanderbilt Avenue many times before, but walking through Vanderbilt Avenue Open Streets on a September evening last year was a revelation. With cars no longer clogging the asphalt, people filled the space. Outdoor dining meant restaurants poured onto the streets. Kids played. Young people were enraptured in catch-up conversations down blocks of tree-lined concrete median. The brick buildings only seemed to glow with more warmth as the sun set and music spilled about. In an instant, I remembered how little New York needs to roar back to life.

My husband and I were on the A train one night, feeling exhausted and ready to pounce on any empty seat. Unfortunately, most of the available ones were either filthy or covered with water.

I sat down next to one of the waterlogged ones, and my husband, acting nonchalant, stood nearby.

A woman walked over, pulled a tissue out of her pocketbook, wiped off the water and gestured for my husband to sit — all without ever saying a word.

12 dead including suspect after mass shooting in US civic building