Kelly Picciurro, 29, a physical therapist from the Upper East Side, had been checking New York City’s website for days to find out when she could get the coronavirus vaccine. Many health care workers in the first priority group, like Ms. Picciurro, had been anxiously waiting to hear when it would be their turn.

After finally being able to make an appointment online on Monday, Ms. Picciurro was one of the first people at a clinic in East Harlem on Tuesday morning, one of the city’s initial two pop-up vaccination sites that mark a more urgent stage of the inoculation campaign.

The effort to vaccinate millions of New Yorkers against the virus has been off to a sluggish start, alarming city and health officials at a time when infection numbers are surging and a more contagious variant has been detected in the state. To ramp up capacity, the city is planning to open more than a hundred of these new vaccination hubs.

By 9 a.m., a trickle of health care workers had arrived at the East Harlem site, by bike from a nearby neighborhood, by car from Long Island and by taxi, still in their scrubs. Walk-ins were turned away, including Eric Ettinger, 65, a receptionist at a doctor’s office, who biked over just before dawn, was first in line and waited for over an hour before being told an appointment was required.

The process, for those lucky enough to get an appointment, was simple, and the site not busy on its first day of vaccinations.

“I’ve gotten my fair share of Covid tests, and this was nothing compared to that process,” Ms. Picciurro said after getting her shot. “Having the vaccine gives me a little more peace of mind going to work, going on the train.”

The city’s first vaccine pop-up sites — the second, in Lower Manhattan, also opened Tuesday — will be among some 125 new locations for administering coronavirus vaccines that are scheduled to open by the end of January, doubling the current number, the city said. The goal is to accelerate the rate at which New Yorkers are getting vaccines.

As of Tuesday morning, only 118,000 people had been vaccinated in New York City, data showed, despite the city having received more than 480,000 doses. Almost no vaccinations took place on Christmas and New Year’s Day, and limited numbers have been inoculated on weekends. At that pace, it will take more than four years to reach everyone in the city, officials have said.

Only 690 people had received the necessary second dose of the vaccine as of Monday night.

The slow rollout, city and state officials said this week, has been caused in part by restrictive rules governing who can receive the first vaccinations, overwhelmed hospitals struggling with the logistics, and a worse-than-expected pace in nursing homes, which had vaccinated only 11,000 residents through a federally run program as of Monday, according to City Hall. 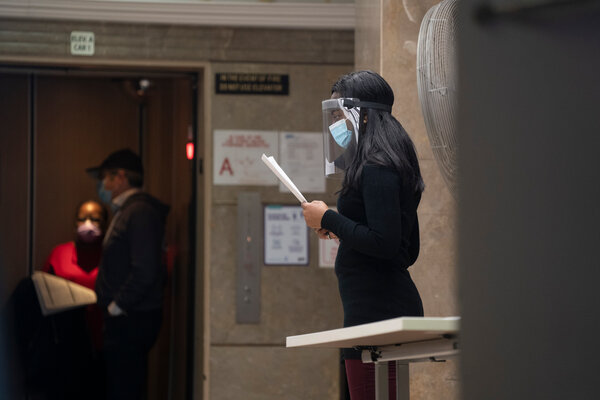 Gov. Andrew M. Cuomo on Monday criticized some hospitals for what he called a lack of urgency in getting staff members vaccinated and threatened $100,000 fines for those that do not distribute their vaccine allocations within a week.

“We want those vaccines in people’s arms,” Mr. Cuomo said, adding, “This is a very serious public health issue.”

HIV ‘outbreak’ in N.S. continues to rise as awareness week kicks off

'I will not let him win': Victims of Jeffrey Epstein testify weeks after his suicide