VATICAN CITY — The Vatican on Tuesday released a highly anticipated report investigating how the disgraced former prelate Theodore E. McCarrick rose through the Roman Catholic hierarchy to become one of America’s most powerful cardinals, despite longstanding allegations of sexual misconduct that ultimately led to his downfall.

The report, which, given Mr. McCarrick’s long career in the church, had the potential to engulf three separate papacies in scandal, did not directly cast blame on Francis or his predecessors for knowingly abetting or protecting him. But a 14-page summary of the report, which included a Who’s Who of Vatican power players and American church officials, seemed to put it at the apostolic doorstep of Pope John Paul II.

“Pope John Paul II personally made the decision to appoint McCarrick,” the report says, despite receiving a letter from Cardinal John O’Connor, the archbishop of New York, that summed up allegations, some anonymous, that Mr. McCarrick had engaged in sexual conduct with another priest in 1987, that he had committed pedophilia with his “nephews” and that he shared a bed with young adult men and seminarians.

Pope John Paul II ordered an investigation to determine if the allegations were true. Bishops found that Mr. McCarrick had shared a bed with young men but were not sure there was sexual misconduct, according to the report. The report now considers the information provided by those bishops to have been misleading. 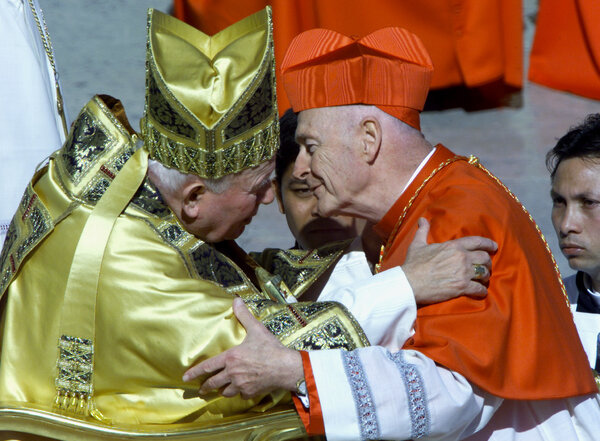 “What is now known, through investigation undertaken for the preparation of the Report, is that three of the four American bishops provided inaccurate and incomplete information to the Holy See regarding McCarrick’s sexual conduct with young adults,’’ it said.

“McCarrick’s denial was believed,” the report says, and the allegations were dismissed as rumor. The allegations of a priest who at the time accused Mr. McCarrick of sexual misconduct were also rejected, because that priest had himself abused two teenage boys.

The Vatican argued that “John Paul II’s past experience in Poland regarding the use of spurious allegations against bishops” to hurt the church “played a role in his willingness to believe” Mr. McCarrick.

New details about allegations made against Mr. McCarrick surfaced in 2005, and John Paul II’s successor, Pope Benedict XVI, “urgently sought” to substitute Mr. McCarrick as the Archbishop of Washington. In 2006, he was forced to resign from Washington.

At around that time, Archbishop Carlo Maria Viganò, later made the Vatican ambassador to the United States, wrote two letters urging his superiors to start a church legal procedure to address the allegations and rumors.

The issue was brought directly to the attention of Pope Benedict, who decided against that path. “Instead the decision was made to appeal to McCarrick’s conscience” and for him to “maintain a lower profile.”

The Vatican says that there were at the time no credible accusations of child abuse against Mr. McCarrick and that Benedict was not “kept apprised of McCarrick’s activities” in the United States or oversees after that. When Archbishop Viganò became ambassador, the Vatican said he did not conduct an inquiry as asked.

Pope Francis, according to the report, did receive notification about the prior indications by Benedict from top church officials but was not given documentation regarding allegations against Mr. McCarrick until 2017. Believing that they had already been thoroughly reviewed, the Vatican said Francis “did not see the need to alter the approach that had been adopted in prior years.”